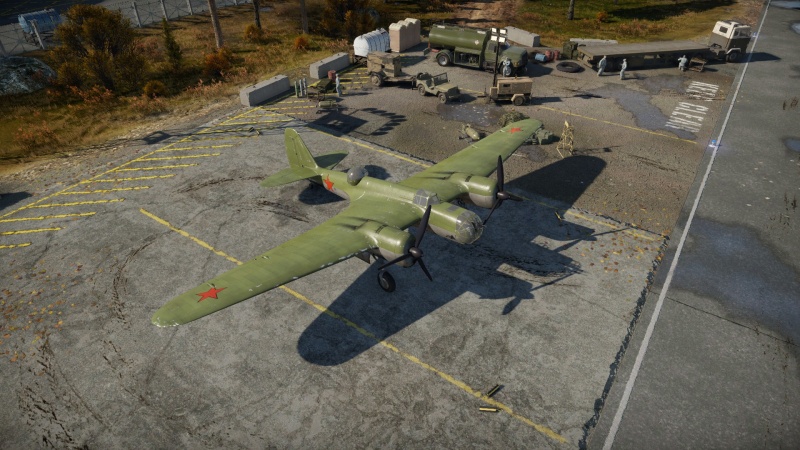 The SB 2M-103 MV-3 is a gift rank I Soviet bomber with a battle rating of 2.3 (AB/SB) and 1.7 (RB). Though initially in the game pre-1.29, this plane was removed upon Update 1.37 due to redundancy. Those players who acquired the aircraft before it was removed still have access to it.

The SB 2M-103 MV-3 can be outfitted with the following ordnance:

This bomber is quite fast for its BR so you should use this as an advantage. For example, you should climb directly at the beginning of the match to 5,000 m and destroy the enemy bases with 2 x 250 kg + 2 x 500 kg which is the heaviest payload you'll have with this plane.

The setup with the most explosive mass is the 2 x 250 kg + 2 x 500 kg, but this way the two 500 kg bombs are carried under the wing roots and the two 250 kg inside the bomb bay. So if you use the default keybind (space) to open bomb bay and drop bombs, the timing will get messed up when bombing a base, since the two wing-mounted bombs will go first, then the bomb bay opens, dropping the two inside. The time between the two drops is long enough for one drop to completely miss the target. To avoid this, set up a keybind for open/close bomb bay, and drop bomb series (all bombs go at once). When approaching a base, open the bomb bay first, then drop all the bombs, they will now all hit the target.

When bombing airfields, make sure to fly above 2,000 m to avoid the anti aircraft artillery, as this plane is unprotected and its coolers will often get damaged, leading to the engines overheating. You should familiarise each module of the airfield to maximise the damage. The airstrip is the most visible and the easiest one to hit, however bombing it seems to halve your reward. So it is recommended to bomb everything else: hangar, fuel area, living quarters, etc. The plane hangars are probably easy, since they aren't too small.

If your plane is an early biplane armed with weak machine guns (2-4 x 7.7 mm or below), you should use deflection shots. That is, imagine yourself as an anti-air missile, predict where you two will meet and fly towards that point. This way it gives the gunners little window to open fire at you. When firing, try to aim for the cockpit for a possible pilot-snipe, as the pilot is very unprotected or aim at its engines to damage it or the cooler. Without an engine the SB 2M won't fly far.