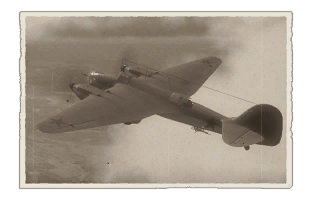 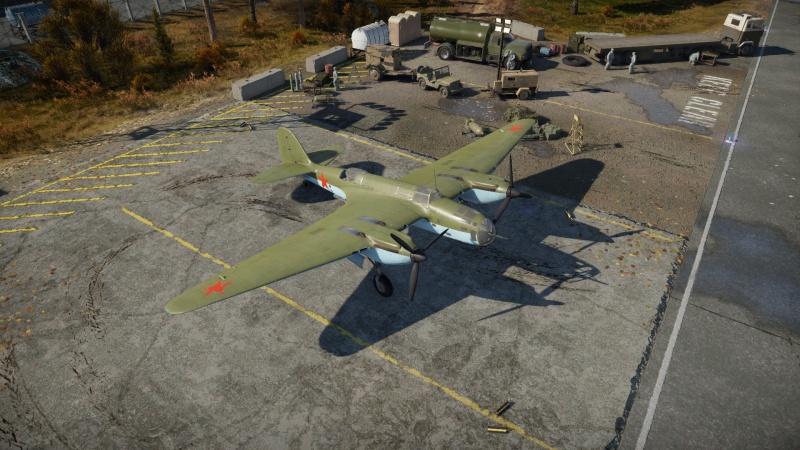 The Ar-2 is a pleasant aircraft to fly with a good climb and turn rate, as well as a low stall speed and takeoff requirement.

The Ar-2 can be outfitted with the following ordnance:

The Ar-2 is defended by:

Ar-2 is quite fast, and is faster than most other bombers at a similar BR (like B-18A and He 111 H-3). Use this as an advantage. Go directly for the enemy bases, then go back to the airfield and restart a bombing run. If an enemy plane targets you, keep flying straight and have a slight climb. Use your defensive turrets to scare away enemies tailing you. In Mixed battles, its armament of 3 x 500 kg bombs is quite the loadout for the battle rating and can be used to carpet-bomb a point. However, only spawn in the Ar-2 if there are no enemy fighters up and don't go low altitude- SPAA and roof-mounted MGs will easily chew this plane up.

The SB-2, the work of aircraft designer Andrei Tupolev, was the one of the world's best bomber when it first flew in 1934. In the Spanish and Chinese battlefields, the SB-2 was so fast that even fighter jets could not catch up. In the late 1930s, the concept of the dive bomber began to appear, and its representative is the famous German Junkers Ju 87 Stuka. Luftwaffe operations over Poland in the early years of World War II demonstrated that dive-bombing was highly accurate and effective against small, sturdy targets, and the Red Army did not have such aircraft. Therefore, around 1940, the Soviet Army requested the development of a new dive bomber, SB-RK, based on the existing SB-2.

The Soviets had already done some early work on the dive-bomber. In 1939, TsAGI (Central Aeronautic and Hydrodynamics Research Institute) developed a dive-bomb system named PB-3. The results of conventional SB-2 tests show that the bomb can be dropped into a circle with a radius of 57 m at a height of 2000 m at an angle of 80°. If the projectile is dropped at the same angle from a height of 4,000 meters, it can hit a circle with a radius of 126 meters. After the pilot releases the bomb, the plane will pull up automatically. In order to prevent excessive overload when changing out, overload limiter is also developed. Regardless of the angle, speed, pole position of the aircraft, always maintain the overload at 3G.

In July 1940, the Soviet Union changed the naming rules of aircraft. Instead of naming aircraft according to the service category, it changed to the abbreviation of the designer's surname. After that, the numerical numbers of fighter aircraft were singular, and bombing, attack, transport and reconnaissance aircraft were even. So when the prototype was completed later that year, the SB-RK (hence the "SB-RK" designation where "SB" means "high-speed bomber" and "RK" means "radiators-wing") was renamed AR-2, and it was the only plane in Archangsky's life to bear his family name. However, due to the outbreak of the Great Patriotic War, only a small number of AR-2 were produced. Early in the war, a large number of AR-2s were destroyed on runways.