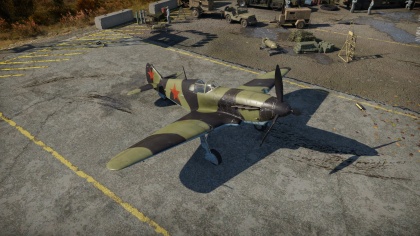 The LaGG-3-35 is a Rank II Russian fighter aircraft with a battle rating of 2.3 (AB/RB/SB). This aircraft has been in the game since the start of the Open Beta Test prior to Update 1.29.

Nakajima Ki-43 Hayabusa and Mitsubishi A6M Reisen: When battling these planes, altitude is everything. These two Japanese planes will have no issue out performing a LaGG-3-35 in maneuverability. Therefore when facing these two enemy planes, use Boom and Zoom tactics to defeat them.

Vought F4U Corsair: The Corsair is a plane to be feared as its firepower (compared to the LaGG-3-35's firepower) and superior speed will be a major factor to watch out for. Do not try to out run or go for head on attacks if possible when confronting the F4U Corsair. Turn fighting is your best chance of success as the LaGG-3-35 will have no issue out turning them.

Messerschmitt Bf 109 F: This plane is the worst enemy to face in a LaGG-3-35. The Bf 109 F will easily out perform he LaGG-3-35 in everything (Firepower, Maneuverability, Climb Rate, Speed, energy fighting, and engine/plane performance at any altitude). To deal with the Bf 109 F is going to come down to who has the most energy at the start of the engagement and who can force the other to lose all their energy during the course of the engagement.

Together with two other fighters, this Soviet single-engine fighter replaced the obsolete I-16 and I-153, which at that time were the core fighters of the Soviet Air Force's RKKA. The LaGG-3 began appearing on the aviation scene in early 1941, several months prior to the beginning of the Great Patriotic War and was manufactured at Lavochkin-Gorbunov-Goudkov until 1944.