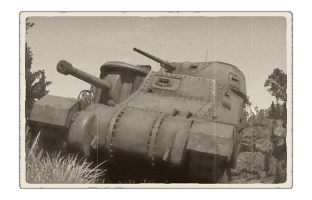 The Grant I is a gift Rank II British medium tank with a battle rating of 2.7 (AB/RB/SB). It was introduced during Update 1.61 "Road to Glory" in the Operation S.U.M.M.E.R. event of 2016. The Grant Mk I has only been available in Operation S.U.M.M.E.R. of 2016 that lasted from 22 July to 22 August. It was unlocked after obtaining 18 tanker Marks of Distinction. It is identical to the American Grant I, which itself is nearly identical to the M3 Lee with the difference being in the different turret design.