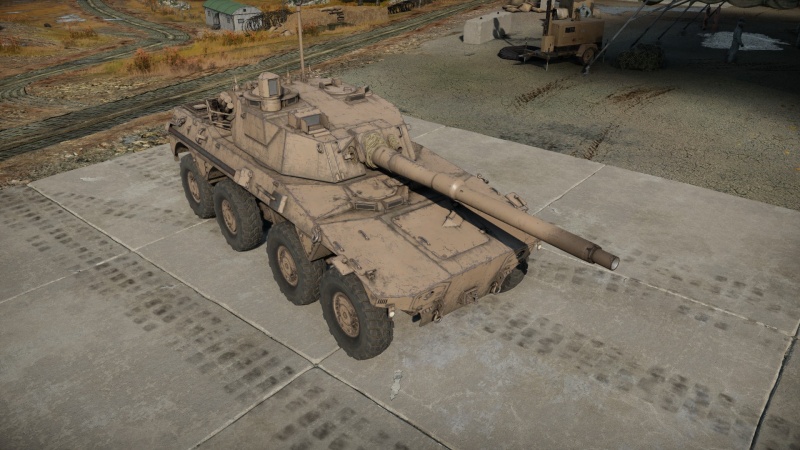 The armour thickness ranges from 15 mm on the sides of the lower front plate to 30 mm near the gun breech of rolled homogeneous armour. This will protect the crew from small arms fire only, most 20 mm guns and above can penetrate the armour with relative ease. Most HE and HESH shells will overpressure the vehicle.

Artillery strikes are lethal to the Rooikat.

Mobility is extremely good. The engine will propel the vehicle to 130 km/h (AB) / 120 km/h (RB/SB) maximum on roads, though the average speed is around 40 to 65 km/h in light terrain, but acceleration is relatively poor. The wheeled chassis will allow to turn the vehicle without losing too much speed, though turning on the spot is not possible. Its two frontal axles pivot give it a gigantic turn radius, meaning that manoeuvring inside cities can range from difficult to nearly impossible. When crossing deep snow or sand the driver sometimes can't decide which gear to use and the vehicle will be stuck at the speed of that specific gear change even if it potentially has the power to go faster. Performance on any sort of incline is pretty poor with low power making some normally accessible slopes impossible to climb, care should be taken so as to not get stuck at the bottom of a trough. It is potentially very fast on paved roads and hard terrain but loses out on soft terrain and speed-wise to some vehicles, like the Centauro and the Type 16.

The vehicle is armed with the South African GT-7 105 mm rifled cannon, which is almost identical to the L7A3 used on the German Leopard and Leopard A1A1. It gets the same ammunition choices of DM12 HEATFS, DM512 HESH, and DM23 APFSDS, in addition to the improved DM33 APFSDS shell, as well as the same reload speed. The gun elevation speed is atrocious: the user has to be aware of the gun's current angle when fighting in close quarters. This can cause you to lose duels or make you overshoot in hectic close quarters engagements.

The HEATFS and APFSDS can easily deal with most enemies presented at its battle-rating, the exception being some late heavy tanks like the Object 279 or uparmoured tanks like the T-55AM-1. The HESH is very situational, but might be good for light-skinned vehicles or helicopters. It is usually best to mostly take APFSDS shells, since it can easily handle every vehicle type, but unlike HEATFS doesn't detonate on bushes or fences and isn't stopped by ERA. 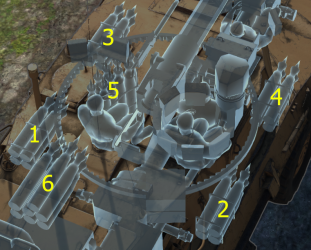 Ammo racks of the Rooikat 105

To be noted that both 5th and 6th racks are First-stage ammo stowages.

The Rooikat 105 is as fast as a cheetah, travelling at 120 km/h in RB and 130 km/h in AB. It is as nimble and powerful as an African rock python. Both of these almighty animals have one major weakness - they both lack protection, which is the same for the Rooikat 105.

A main advantage of the Rooikat 105 is its ability to capitalise on its speed,.It is able to find a concealed spot and wait for its prey to cross into its sights. The Rooikat 105 features an up-gunned cannon, from 76 mm to 105 mm, an increase of 38%. Which means it's a 38% larger round hitting the target. Its GT-7 105 mm rifled cannon is highly accurate, able to deliver its round on target over 3,000 m away. Additionally, the Rooikat 105 features thermal sights, which makes finding enemy tanks that are using foliage a breeze.

However, it lacks any armour, the thickest part of this fine tank is around the barrel at 40 mm. The front only offers up to, 30 mm. The side offers only up to 25 mm of thickness. This means that a .50 cal rifle will be able to penetrate the tank.

Unlike other tanks in the British tree which allow for a broadside to be taken, the Rooikat cannot, as it lacks any type of protection, the only protection it allows for is over-penetration of high fuse rounds. The technical advantages of this tank must be played to the fullest extent by leveraging the advantages of the terrain on the map. This means that hills, houses, bridges, forests and ridges are used along with the appropriate camouflage selection for the map, to reduce the chances of being seen by the enemy.

When engaging enemy tanks, aim for the sides and front, ideally aim for the location of crew members and critical elements - anywhere which is flat.

The Rooikat will allow for them to be seen, whether it be day or night, using the thermal gun sight. Make sure to use the laser rangefinder to adjust and correct the shot so it hits the enemy tank the first time. If the shot misses, move the tank to another location the reload takes up to 6.7 seconds. Most rival tanks provide an autoloader which substantially reduces their reload times, they may be able to fire two or three rounds in this time towards your location. Only one round needs to hit to knock you out.

Commander sights placed up top means you can peek from behind ridgelines and hills, easily scouting enemy units from safe cover. Using commander override will facilitate quick snapshots as well.

Rooikat 105, is the African rock python, just like the snake itself at night this lightly armoured vehicle becomes the master of the battle. Its fast speed, high agility and accurate cannon allows for it to be unseen, in the dead of night. It's vital to use your thermal sights as well as using the vegetation to make sure enemy tanks such as the Object 120 do not detect you. They can easily knock you out with one shot from their pin-point accurate dart like rounds, which can destroy the toughest of tanks easily.

It's extremely important that, when you have fired a shot, you move to a new location, using the darkness of battle as your cover. Do not stay in the same spot, because the enemy tanks will have seen your muzzle flash and now would be scanning the battlefield in that area with their thermal sights or radar. Instead, fire a single shot, move and repeat and keep the enemy unaware of your presence.

Use the gunner's thermal sight to check the area of the cap zone making sure no light sources can be seen. If it is clear and no enemy tanks are hiding in the distance waiting for you to cross into their sights, head towards the cap. When approaching the cap zone head towards an object in the cap zone and stay behind it while you cap the zone.

Defending the cap zone is a easy process, withdraw from the zone and use the terrain to your advantage. The enemy will try to counterattack, wait for them to counterattack, then only once they are close use the APFSDS rounds to knock them out.

After the Rooikat 76 entered production in the early 1990s, South African engineers continued developing the vehicle in an effort to further expand upon its capabilities. As such, the engineers decided to, among other minor changes and improvements, fit the Rooikat with a larger 105 mm cannon, thus creating the Rooikat 105 in the process.

Development of the Rooikat 105 was completed in 1994 and a single prototype was built. However, after demonstrating the vehicle to the SANDF, the military decided not to procure the improved version of the Rooikat, given that they were already more than content with the base model of the vehicle.

As a result, the Rooikat 105 was subsequently offered on the export market in an effort to secure orders for the vehicles. However, despite its 105 mm cannon and compatibility with most NATO rounds, the Rooikat 105 failed to attract the interest of any potential foreign customers. In the end, only a single prototype of the Rooikat 105 was constructed, with the vehicle never entering production due to lacking demand.