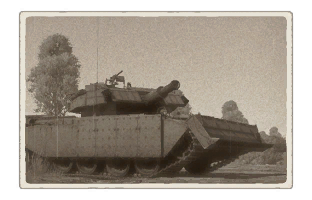 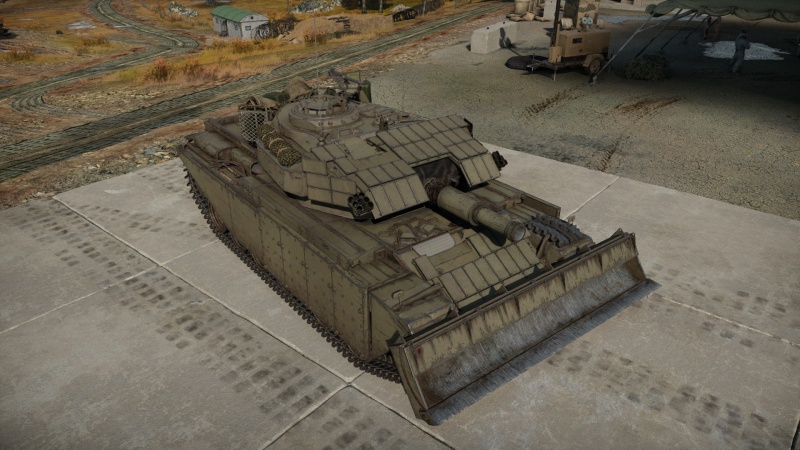 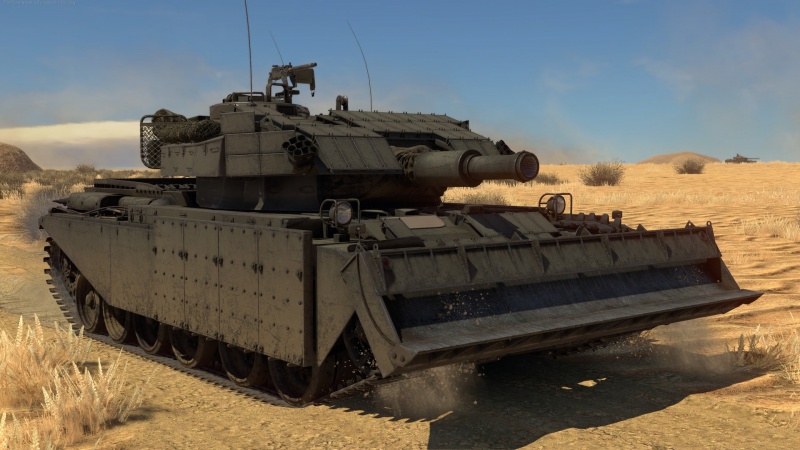 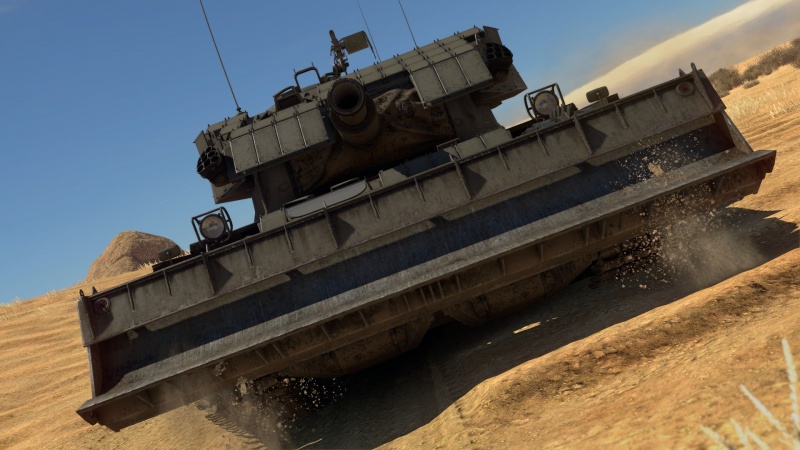 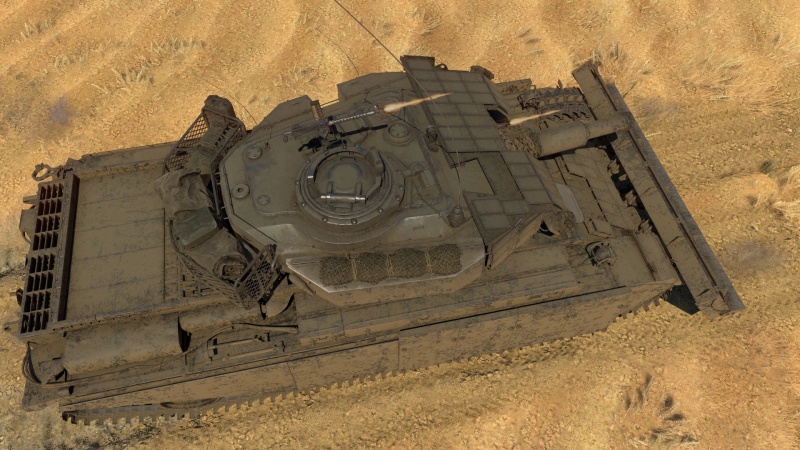 The Centurion Assault Vehicle, Royal Engineers Mk.5, or simply the Centurion Mk.5 AVRE, is a premium gift rank V British medium tank with a battle rating of 8.0 (AB) and 7.0 (RB/SB). It was introduced in Update 1.79 "Project X".

Overall, the armour on the AVRE is similar to that on the Centurion Mk 3 gun tank with three major differences: ROMOR-A ERA, composite side skirts and a dozer blade.

The ERA provides additional protection (300 mm HEAT, 30 mm KE) on key areas of the tank, namely the turret face and upper glacis plate, but this has little impact against most opponents in RB, due to the majority of shells at rank IV being of the kinetic energy (KE) variety. In AB, it may protect against the light tanks, for example, it reduces the efficiency of the BMP-1's main gun, which is also quite dangerous with aim assist when used as a follow-up for ATGMs. Unfortunately, the turret ERA will often fail to stop upgraded modern ATGMs with 700 mm of penetration. ERA also changes the visible profile of the turret, obscuring the weak points beneath the standard Centurion turret.

The composite side skirts provide a significant increase in protection against small calibre HEAT and autocannon fire, increasing it to the point where such rounds can no longer penetrate the side armour. They do not change the effect of medium tank rounds, as the additional protection simply isn't enough to stop them. They also do not cover the entirety of the sides, so they can be circumvented.

The dozer blade may seem unimportant at first glance as it consists of 70 mm of structural steel, not RHA, but this is not the case. The blade acts as spaced armour against most rounds aimed at the hull, adding around 60 mm against KE and 200 mm against HEAT. This can also be added to by the ERA on the front plate, overall providing greater than 400 mm of protection against HEAT rounds.

The dozer blade can also be used to easily create trenches with soft ground, which will initially conceal some of the hull and, with some time and effort given, completely shield it. It's also technically possible to dig walls and holes to force enemies to abandon their defences in order to pass through a corridor - not every tank can reverse back into a slope, and it is impossible to just peek around a corner, if every corner is also a trench; but such setups take a lot of time and it's impossible to dig into asphalt.

Overall, additions make the tank strong against tankers overzealously relying on HEAT and HEATFS to solve all of their problems.

The main weapon is a howitzer loaded with HESH. The shells are launched with very low muzzle velocity, which makes them difficult to aim in RB, and to aim past 800 m user has to manually adjust the scope, as otherwise it is impossible to see the target.

At close range the gun can be easily used to annihilate or severely cripple any tank. It is still recommended to aim at least for one second before firing, as HESH is only capable of penetrating one layer of armour, and will do no damage if it hits side skirts or some irrelevant add-ons on top of the hull.

Although the gun is difficult to aim, the shells are launched upwards and therefore can be fired over hills straight into enemy roof. This, coupled with penetration statistics close to the FV4005, make the AVRE near godlike in AB, as it is possible for this tank to bombard enemies straight in their cover, knowing where they are and the exact range towards them. 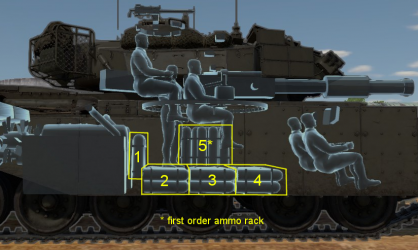 While the rangefinder can be used in conjunction with gun-sight range adjustment, the tank will struggle in medium to long distant combat, as the HESH shells lack any semblance of accuracy past around 400 m, with shells arcing such that shell placement becomes quite difficult along with shell travel time becoming increasingly high. However, against a completely static target and with good rangefinding crew skill, it is not impossible to land a direct hit up to 800 m. However, if you miss, your long reload speed means you may completely miss your chance at destroying your target, which can easily manoeuvre away without threat of damage, or simply return fire freely.

In the 1960s, the British army felt the need for a modern multi-functional engineering vehicle. They chose the Centurion Mk 5 main battle tank base to replace the outdated engineering tank, which used a Churchill chassis. Since the engineering vehicle's tasks were rather specific, the Centurion chassis was given special equipment: the tank received a bulldozer scoop, a device was mounted above the scoop for laying fascines, the altered rear armour plate was equipped with a tow hitch, and a seat was installed next to the driver's seat for a new, fifth crew member – a navigator. The engineering vehicle, which was called the Centurion AVRE (abbreviated from Armoured Vehicle Royal Engineers) was designed to carry a special engineering gun capable of destroying fortifications, pillboxes and other fortified defensive positions. That gun was the short-barreled L9, a 165 mm calibre cannon with low recoil. The vehicle received an ammunition complement of 53 shots with high-explosive squash head (HESH) shells with huge destructive force – each charge contained almost 16 kg of explosives. The Centurion AVRE became the standard engineering vehicle for the British Army and participated in several armed conflicts, including the 1991 Gulf War. In the 1980s, Centurions AVRE were modernized, receiving additional armour including ROMOR reactive armour - this modification was used in operation "Desert Storm". The vehicle was retired in 1993.