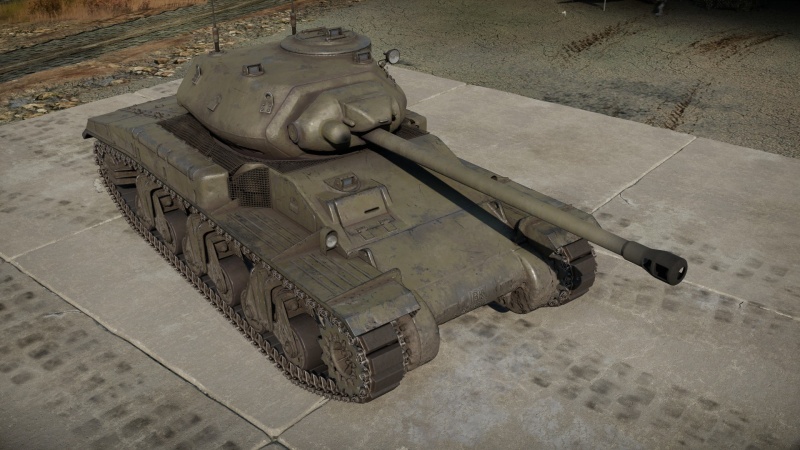 The Cruiser tank A.C. Mark IV, also known as the AC IV Thunderbolt or the AC IV Sentinel, is a premium rank III British medium tank with a battle rating of 5.3 (AB/RB/SB). It was released some time after Update 1.55 "Royal Armour". Armed with a 17-pounder gun, it has a high firepower for the battle rating it is in, able to effectively fight any other tanks at the battle rating. The Thunderbolt is also a small and manoeuvrable tank able to exploit harsh terrain to target the enemy.

The AC IV is a relatively small medium tank in comparison to the common mainstay of the other countries, especially when compared to the American Sherman tanks. The Sentinel also has a good manoeuvrability and power-to-weight ratio for the propulsion, able to accelerate to its max speed of roughly 30 km/h quickly and stay there on stable terrain. The tank has a great advantage of a decent reverse speed in comparison to other medium tanks of its calibre, with a reverse speed almost the same speed as forward. The addition of the 17-pounder gun also gives this tank a whopping high firepower for the size, so it can stand a chance against tanks of the same tier despite being out of the league in terms of armour.

Ammo racks of the A.C.IV

Does not have improved zoom like the other rank III British tanks of similar BR, thus has worse zoom than many of its opponents, which may have variable zooms up to X5. Do not unnecessarily provoke German SPGs, as they have superior optics and are unlikely to miss.

In full up-tier, do not let Japanese medium tanks (e.g. ST-A1) get an upper hand at all costs, as they have optics eclipsing these entirely and can easily snipe A.C.IV from 2 km away, with accuracy modifications.

The small calibre of the Vickers machine gun makes it largely ineffective against all armoured vehicles but the ones with an open compartment. It still can be used to ping targets as a rangefinding help. While the belt capacity of the machine gun is adequate, its rate of fire is extremely slow for the battle rating.

Exploit the A.C. IV's manoeuvrability against the heavier tanks, plus the 17-pounder tank allows for a penetration through the enemy's armour to cause internal damages. The fast reverse speed makes the "shoot-and-scoot" tactic a viable method against the enemy, and should be the prime one as the armour of the Sentinel is not exactly the most durable at only 50 mm flat. However, the sloping nature of the armour could give the bouncing capability of the tank comparable to the T-34, it's even arguably much better. So while the weight class is definitely against the Sentinel, a chance is always there to take out the opposition.