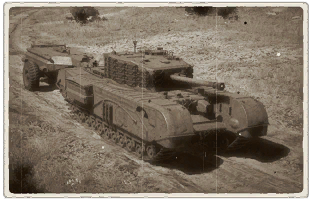 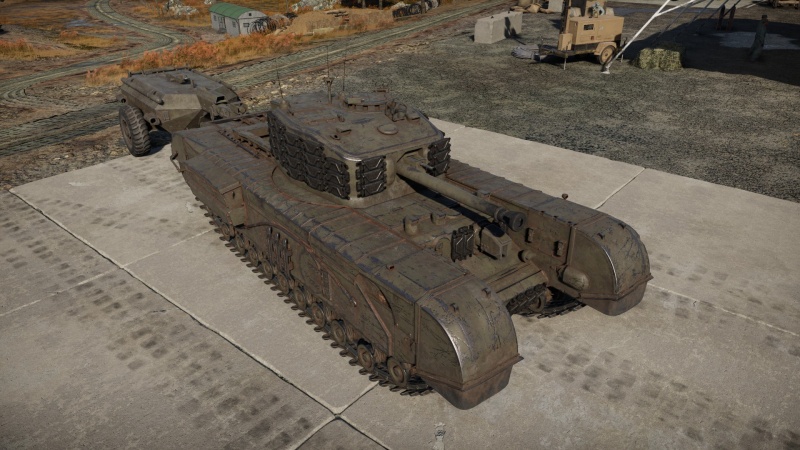 The Tank, Infantry, Mk IV, Churchill VII (A22F) Crocodile is a premium gift rank III British heavy tank with a battle rating of 4.7 (AB/RB/SB). It was introduced in Update "Fire and Ice" as a reward for Battle Pass: Season IX, "Smell of Victory".

The Churchill Crocodile retains the same slow mobility as the Churchill VII. It has a low top speed and difficulty to turn and climb slopes. It won't be the first to the frontline, but that means it will be ideal for a support role.

The 75mm OQF Mk. V is an underwhelming gun for its BR. Its best shell can only go through 103 mm of armour. In an uptier, your gun will barely damage enemy vehicles. The most you can do is disable external components like barrels and tracks. 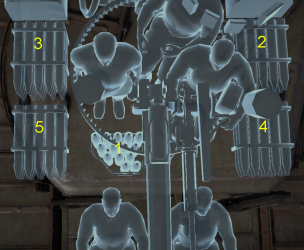 Ammo racks of the Churchill Crocodile

As the flamethrower is unable to penetrate fully armoured vehicles, it is ineffective damage-wise against most tanks that a player will encounter. Due to the weight of fuel, flamethrowers can only hit targets at relatively short ranges.

However, this weapon is particularly useful for eliminating exposed crew members in open-topped vehicles and SPAA. For example, if a Churchill Crocodile shot flames at a Pz.IV H, it would take no damage. A Sd.Kfz. 6/2, however, would be burnt down within a few seconds.

This weapon is located in the bow gun position, replacing the machine gun mounted in the regular Churchill VII. As such, it has a very limited traverse and is dependent on the hull position for horizontal targeting. Vertical guidance is quite good, which can allow it to reach targets at short ranges outside of point-blank. Unfortunately, the slow speed of the Crocodile can make it difficult to get within range, so players will need to use the vertical limit to 'lob' shots onto the enemy.

In attacking enemies that are fully armoured, a Churchill Crocodile can use its flamethrower to temporarily blind or distract the enemy. Fully armoured vehicles can be shot with flames to blind and confuse them which can allow the Crocodile to shoot back or reposition itself. Fire can serve as a deterrent to vehicles with exposed crew from getting too close, something that can be problematic for a Churchill tank.

It should be noted that since this weapon is very unique, enemies will know a Churchill Crocodile is around when the flamethrower is used. When it is not in use, the fuel trailer is a major indicator of the vehicle. If this fuel tank is destroyed, it will explode. The tank crew will be unharmed, but the weapon system will be rendered unusable.

The flamethrower can be used to kill open-topped targets behind cover, by just spraying it over an obstacle until at least some of the flames land on the enemy

The Churchill Crocodile is not too different from the Churchill VII, being a modified version with a flamethrower weapon in the bow gunner position.

The flamethrower is useful against open-topped vehicles, but otherwise the Churchill Crocodile's offensive capabilities remain the same as the Churchill VII with the 75 mm gun. Due to the 75 mm's low penetration and situational use of the flamethrower, it is recommended to work and rely on teammates to help destroy the enemy.

With the First World War bringing about the development of the tank and the flamethrower, different nations would devise ways to combine the two into a single weapon system during the interwar period. A mobile armoured flamethrower would allow the short-ranged weapon system to get close to the enemy with minimal risk from small-arms fire. 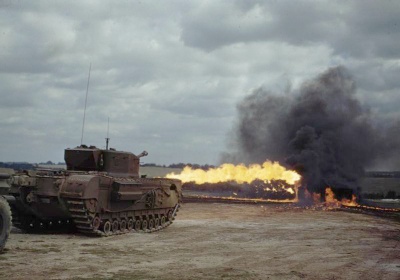 In Britain, efforts by the Petroleum Warfare Department (PWD), Associated Equipment Company (AEC), and Ministry of Supply (MoS) would lead to the development of a flamethrower tank based on the Churchill infantry tank family.

This would be completed in the form of an fuel trailer towed behind the Churchill with lines connecting to a flame projector mounted in place of the bow machine gun. The trailer was lightly armoured and could resist light small-arms fire. If the trailer was destroyed or ran out of fuel, the crew could jettison it safely from the inside of the tank.

Churchill Crocodiles began service in the European Theatre in 1944 as part of specialized support units. The flamethrowers served as a potent psychological weapon as well, with many German troops choosing to surrender instead of being burned to death. They were deemed effective, despite their short range.

Crocodiles would go on to serve in the Korean War alongside other Churchill tanks until they were withdrawn from service in 1951.