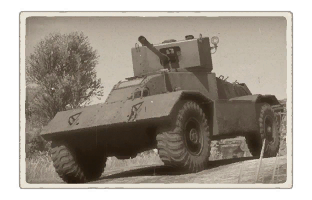 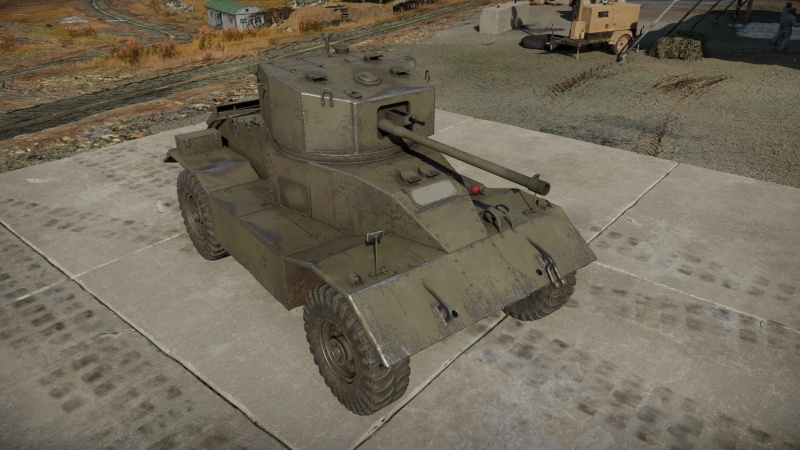 The Armoured Car, AEC Mk II is a premium gift rank II British light tank with a battle rating of 3.0 (AB/RB/SB). It was introduced during Update 1.75 "La Résistance" in the 2017 "Festive Quest" that took place between 22 December 2017 to 22 January 2018. It was obtained by completing 7 tanker's Christmas toys.

The AEC Mk II is similar to the AEC AA, with a different turret housing a 57 mm 6-pounder cannon rather than two synchronized Oerlikon 20 mm anti-aircraft cannons. As such, the vehicle has a lower profile than its predecessor, which grants it more stealth capabilities. In addition, there is a 7.62 mm BESA machine gun for use, which is nice for dealing with lightly armoured targets such as open-topped anti-aircraft vehicles and SPGs.

Being very thinly armoured, the AEC Mk II is very vulnerable to heavy machine gun strafings, artillery strikes and even ammo rack detonations from nearby vehicles.

Being an armoured car, the AEC Mk II is a light vehicle. It accelerates quickly and has a good cruise speed on hard surfaces (solid ground, roads). While your top speed is high, your cruise speed will be around 50 km/h. As it is equipped with tires, the AEC Mk II struggles on soft terrain (sand, mud, snow). The reverse speed is also poor for a light armoured car. The AEC Mk II is average at fording: 17 km/h and loses quickly speed when driving uphill. Another important point to take into account is the turn radius: like all WW2 wheeled vehicles, you can not turn on the spot and always need space to change direction. The bigger the speed, the bigger the turn radius. You will also need more distance to come to a full stop and braking while turning will cause your vehicle to go into an uncontrolled skid.

The small calibre of the BESA machine gun makes it largely ineffective against all armoured vehicles but the ones with an open compartment. It still can be used to ping targets as a rangefinding help.

The AEC Mk. II is to play mainly in the role of flanking and reconnaissance. Due to the high speed and thin armour, it is ill-advised to use this vehicle in frontal assaults. Added to the new mechanic of active scouting for light tanks, it is rewarding to be an effective scout by highlighting targets for allies, thus farming SP and experience from their assistance. However, the AEC isn't as small as a scout-like the American M22 Locust, so scouting and flanking can be risky if done incorrectly. The AEC also have the same 6-Pounder cannon found on the Crusader Mk III, Churchill Mk III, Cromwell Mk I and the Valentine Mk IX, so the AEC has a fast rate of fire with an excellent muzzle velocity. Here are some methods for maximizing not only combat effectiveness but also the chances of surviving.

With very light armour, this renders the AEC vehicle highly exposed to any form of enemy fire except machine gunfire. However, at its BR, there are some adversaries that deserve special note.

German Vehicles - The AEC's greatest adversary is most likely the Panzer IV F2, due to its long-barreled 75 mm cannon, which can punch right through the armour- even from long range. In addition, any later model of the Panzer III is going to give severe problems due to their long-barreled 50 mm cannon, which has a rapid rate of fire. As laughable as it sounds, the Flakpanzer I and the Flakpanzer 38 "Gepard" will also shred the AEC, as a result of their ability to use the HVAP-T round for their 20 mm cannons, which have a murderous rate of fire. In uptier matches, stay away from a Flakpanzer Wirbelwind at all costs, as the sheer volume of their fire will utterly obliterate the AEC, even if they do not have the HVAP-T round. The most dangerous opponent in respect to the AEC is the Sd.Kfz.234/2 "Puma" due to its amazing speed and a high-velocity 50 mm cannon. The Marder III and Marder III H will also give issues, due to their high-velocity cannons.

Soviet Vehicles - The Soviets have the most tanks with heavy armour, which can make it difficult for even for the 6-Pounder to punch through. That being said, a KV-1 is going to give a lot of problems, even at close ranges. In addition to that, the most abundant Soviet threat is going to be the T-34, due to its fast speed and sloping armour, which has the chances to bounce a shell, even at close range, if the tank is angled well enough. The most dangerous opponent is the SU-122, due to the 122 mm howitzer it carries, which doesn't need to make a direct hit if firing High-Explosive shells. In addition, the YaG-10 (29-K) boasts a high-velocity 76 mm cannon, which will tear through the AEC's armour even at long ranges.

Japanese Vehicles - Japanese vehicles may not have the strongest armour for their tanks, but their guns will make anyone think twice. Most notable of these is the Chi-Nu and the Ho-Ni III, which have high-velocity 75 mm cannons, which will rip through most armour at medium to long-range. The So-Ki SPAA can also rip through the AEC due to the twin 25 mm cannons. In addition, the M24 Chaffee (Self-Defense Force) boasts a 75 mm cannon and a .50 cal machine gun, which can bore through the thin armour.

French Vehicles - The French also have some vehicles that are heavily armoured. Most notable of them being the Char B1 bis and the Char B1 ter. The Char B1 ter is probably most notable of them, due to the ridiculous amount of armour from the front. The SAu 40 is a viable threat, thanks to its 75 mm cannon. It is also plausible to face the French M4A1 Sherman, which not only has enough armour to possibly bounce the 6-pdr shells but a 75 mm cannon and a .50 cal machine gun, which is notorious for tearing through just about any lightly-armoured vehicle. It is also important to note that the 40 mm Bofors CCKW 353 AA truck is a major threat to the AEC, due to the Bofors 40 mm heavy Anti-Aircraft cannon it wields.

This would be followed by the Mark III, mounting the British 75 mm gun, making it the most powerful armoured car of the war, and used in Western Europe alongside the 75 mm armed US M3 GMC half-track in the heavy troop of British armoured car squadrons. A total of 122 Mark Is and 507 Mark IIs/IIIs were built. Sometimes referred to as "Junies" or "Matadors."