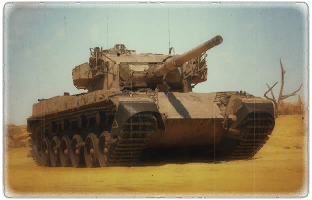 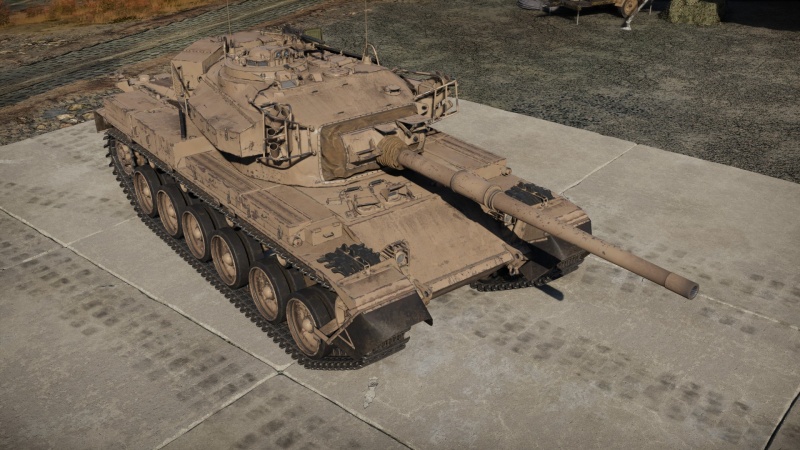 The Olifant Mk.1A is a rank VI British medium tank with a battle rating of 8.3 (AB/RB/SB). It was introduced in Update "Ixwa Strike".

The Olifant is an early South African modification of the legendary Centurion tank. The vehicle received an increase in firepower and mobility from the earlier British series, to match the needs of extended cruising capabilities and long-distance skirmishes within the dusty and heated African environment.

Fitted with a GT-3 cannon, the Olifant should be as persuasive as most NATO counterparts, due to the GT-3 being a variant of the popular British-made Royal Ordnance L7 gun. On the weak side, the armour layout can be described as obsolete against HEAT and APFSDS, which are quite common at Olifant's rank. This lack of armour simultaneously with a somewhat slow turret traverse and below average top speed, commits the Olifant to use distance, uneven grounds and marksmanship skills to endure the battles. 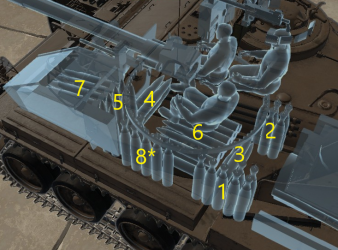 Ammo racks of the Olifant Mk.1A

The Olifant Mk.1A is relegated to a support role as it lacks the armour to brawl or the mobility to flank. Players should get into a good position early in the game and use the powerful APFSDS shell of the Olifant to pick off hard targets.

The Olifant Mk.1A was an upgrade for the Olifant Mk.1 that began development in 1981. The main features were a new, fully stabilized 105 mm GT3B main gun, a new fire control system, and other improvements.

The Olifant Mk.1A has a crew of four, the driver in the hull and the commander, gunner, and loader in the turret. It maintains the base of the Centurion but with overhauls in most important aspects such as mobility and firepower.

The Horstmann suspension of the Centurion was retained on the Mk.1A, having never been changed on the Olifant Mk.1 or Mk.1A[1]. Propulsion was provided by a Continental 29-litre turbo charged air cooled radial V12 engine, which could produce 750 horsepower. In order to prevent the dust from the environment from interfering with the engine's operation, new dust filters were added. Additionally, a new rail system was implemented that allowed the engine to be replaced in only thirty minutes with a crane. A new transmission was fitted with two forward and one reverse gear. The Olifant Mk.1A had a horsepower to ton ratio of 13.39 hp/t and could achieve a maximum speed of 45 km/h.

The main armament of the Olifant Mk.1A was a 105 mm L7 or GT3B rifled cannon, which was fully stabilized. The ammunition initially consisted of the L52A3 APDS, M456 HEAT and M156 HEAT rounds. In the mid-1980s, M111 APFSDS rounds were acquired for use on the Olifant Mk.1A as the primary anti-tank ammunition. The ammunition stowage was redesigned and as such the total amount of 105 mm ammunition was increased from 64 to 72 rounds.

The turret rotation and gun elevation mechanisms were replaced with an improved electrical gun and turret drive, this allowed the turret drive to traverse the turret 360 degrees in 20 seconds[1]. Also, the main gun was fully stabilized. A new fire control system (FCS) was fitted. The gunner's 6x zoom sight was replaced with an Eloptro 8x zoom sight which included a laser rangefinder accurate to up to 10 km[1].

The Olifant Mk.1A retained the armour of the Centurion Mk 3. Needless to say, the Olifant Mk.1A was incredibly vulnerable to the T-54/55 and T-62 tanks it would face in combat, and also to RPG-7 infantry anti-tank weapons. The Olifant Mk.1A had two banks of four smoke grenades each mounted on each side of the turret for a total of eight launchers.

The Olifant Mk.1A entered production in 1983 and entered service with the SADF in 1985. A total of 153 Olifant Mk.1As were converted from Olifant Mk.1s by the late 1980s and it was only adopted by South Africa.

The first combat deployment of the Olifant Mk.1A was during the South African Border War which consisted of Operations Modular, Packer, and Hooper from 1987-1988. During these operations, South Africa came to the aid of the National Union for the Total Independence of Angola (UNITA) who were at risk of destruction by the People's Armed Forces of Liberation of Angola (FAPLA), who were supported by Cuba and the Soviet Union (USSR).

Eight brigades and an auxiliary support force of the FAPLA (along with Soviet advisors) moved from Cuito Cuanavale to attack the UNITA forces at Jamba and Mavinga. The SADF sent Olifant Mk.1 and Mk.1A tanks in two squadrons - of 11 tanks and two command tanks each - to Angola to reinforce the Ratel 90 armoured cars that made up the rest of the anti-armour materiel there. During the conflict, Olifants and Ratel 90s faced off against 150 FAPLA T-54 and T-55 main battle tanks (MBTs) in a large-scale conventional war fought at incredibly close ranges of only 50 to 150 m.

The Olifant Mk.1A saw its first combat with E-Squadron during Operation Modular in 1987. During that operation the tank crews preferred to load HEAT rounds rather than APFSDS rounds because HEAT rounds are effective against light and heavy armoured targets, though they could detonate prematurely upon contact with the brush. Additionally, HEAT rounds made a more noticeable visual indication of a hit on an enemy tank, and there was also a fear that APFSDS rounds would ricochet off of trees. Due to the thick brush, tank engagements occurred at very close ranges due to reduced visibility.

The first knock out of a FAPLA tank by an Olifant occurred during the Battle of Chambinga against the FAPLA 16th Brigade during Operation Modular, with a kill credited first to Lt. Hein Fourie's Olifant on 9 November 1987 followed by another credited to Lt. Abrie Strauss' Olifant.

The SADF began Operation Hooper on 2 January 1988, with F-Squadron under the command of Major Tim Rudman taking the offensive against the FAPLA 21st Brigade which was holding at the River Cuatir. During the operation, Cuban forces counterattacked in an action that resulted in the loss of several Olifant tanks; one was damaged in combat, two were detracked by anti-tank mines. The SADF mounted multiple attempts to recover the tanks but had to retreat under heavy attack by enemy guns and artillery. This left the amount of Olifants lost at three with one more damaged. Additionally, a Ratel armoured car was destroyed and four SADF soldiers were killed. The FAPLA lost 21 T-54/T-55 tanks and suffered 480 casualties.

The two detracked tanks were never moved while the third Olifant was taken by the FAPLA. Its turret was sent to the Soviet Union while the hull remains at Menongue Airport in Angola[1].

Centurion tanks entered service with the South African armed forces already at the start of the Cold War in the early 1950s when South Africa purchased a few hundred Centurion Mk.3 tanks from the United Kingdom. However, operating the Centurions in the warm South African climate quickly turned out to be problematic as the tanks were prone to overheating. As a result, South Africa sold off many of its Centurions to Switzerland during the 1960s in order to acquire other equipment while many of the remaining tanks were relegated to reserve roles.

With conflicts in the region flaring up during the '70s, the South African armed forces were reminded of the importance of their armoured units and several projects were initiated to modernize the Centurions in service. These projects resulted in the creation of two interim models of domestic Centurions - the Skoikaan and Semel. In parallel however, the South African government formed a company in the private sector to develop a proper modernization package for the Centurion.

Work on the project began in the mid '70s, with South African engineers taking inspiration from the Israeli Sho't Centurions and applying similar upgrades to what would eventually become known as the Olifant tank. The first prototype of the Olifant rolled out of the factory in 1976 and underwent testing. Shortly afterwards, the Olifant Mk.1 entered production service in 1978, with production lasting until 1984. In the early 80s, the Olifant was upgraded to the Mk.1A modification, which featured a domestic version of the L7 cannon as well as other upgrades.

The Olifant Mk.1A remained in service with SANDF into the 1990s before being succeeded by the Olifant Mk.2. In total, over 150 Olifant Mk.1As were produced, some seeing action during the conflicts with Angola in the early 1980s.