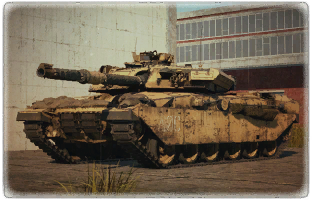 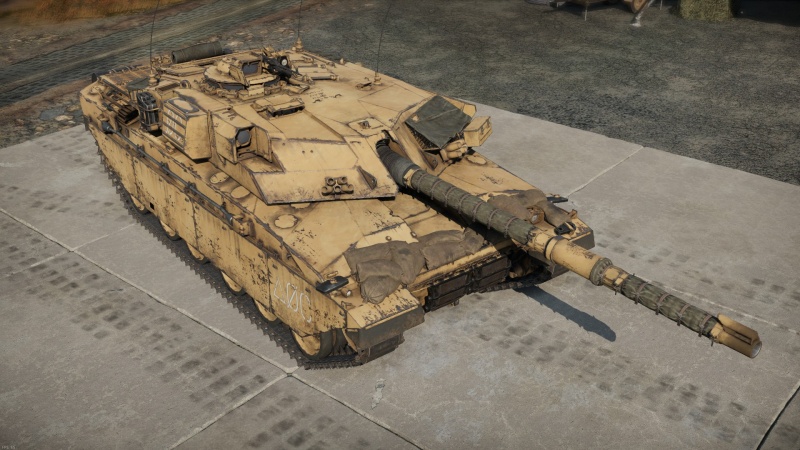 Overall, the armour on the Challenger DS is exactly the same as the tech tree counterpart, the Challenger Mk.3. However, it lacks the additional ROMOR ERA and the sides armour package. It gets a slight but negligible upgrade on the lower frontal plate compared to the Challenger Mk.2 as it has spare tracks strapped on the LFP. While it is a Challenger Mk.3, it is most comparable to the Challenger Mk.2 in terms of armour. The upper half of the turret cheeks are capable of withstanding almost all kinetic penetrators and will stop most chemical projectiles with less than 800 mm penetration, while the lower half won't protect against most top-rank rounds. The hull composite is only good against lower penetrating APFSDS rounds such as T-55AM, and can also withstand some chemical munitions, but it is not advised to rely on this armour. The rest of the tank (turret and hull sides, lower front plate) has decent protection against chemical rounds due to the add on armour, ERA, and thick turret sides.

While it is slower than Western MBTs at its BR, it is not a slow platform. It holds a fast top speed for both forward and reverse. Despite being a heavy vehicle, the brake distance is surprisingly low, between 20-30 m at top speed. It has the ability to do neutral steering relatively fast and, since it comes with all upgrades, it immediately gets the tracks modification which significantly improve this ability. It has little to medium impact when crossing muddy terrain, wet and snowy terrain, but nothing that impacts performance significantly. Thanks to not having the additional armour package, the cross-country capabilities of the Challenger DS are significantly increased, being able to easily traverse and cross over long trenches, deep craters and through steep terrains up to a certain level.

After the introduction of Challenger in 1983 as the new MBT for the British Army in different units, there were debates on its reliability due to its inferior overall performance in Canadian Army Trophy of 1987. As the Invasion of Kuwait by Iraq in 1990 and the subsequent Operation Sand Storm (Gulf War) began in 1991, the Challengers were given the chance to show their own worth.

The British Army deployed the 1st Armoured Division to the Middle East alongside with 3 armoured brigades with Challenger tanks, some even with the latest Mk.3 series with new ERA packages installed in Saudi Arabia by late 1990. After the deadline for complete withdrawn of Iraqi forces passed, the coalition started the assault by 17th January, 1991 where the Challengers destroyed and captured hundreds of Iraqi tanks (ie. T-55A, Type 69-IIa) while received no loss from enemy fire. Operation Desert Storm was where the Challenger held the world record of the longest tank-to-tank kill done by the callsign of 11B from the Royal Scots Dragoon Guards, achieving a destruction at around 5.1 km away on 26th February, 1991.

The delivery of Challenger DS belongs to a tank with a callsign Zero Charlie (ØC; the Ø is in fact a slashed zero [0] instead of the oe sound in IPA) of A Squadron to an unknown unit in British Army.