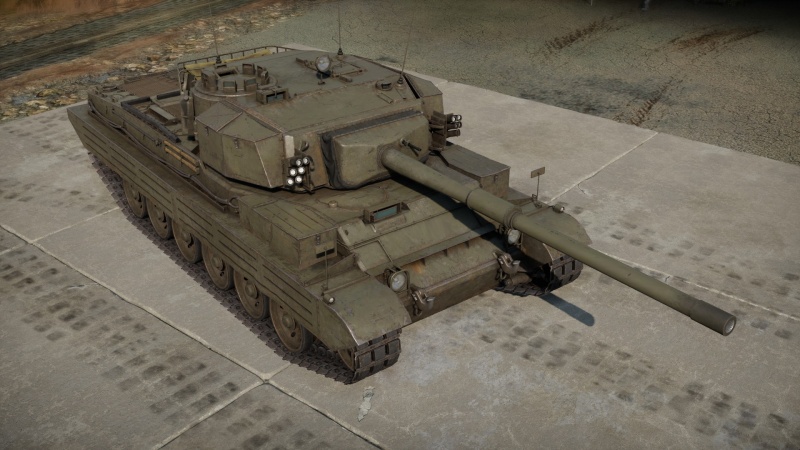 The Vickers Mk.1 is like a sniper, designed to engage with minimal threat to the tank and its crew while still being a major thorn in the enemy's side. Stick to the knowledge of the maps you'll be playing on to enhance your defensive playstyle, grabbing husks of old tanks or tank ditches to your advantage then bursting out of cover to ambush enemies.

The tank has a mediocre off-road top speed of 32 km/h (20 mph) stock, yet can do -11 km/h (-7 mph) in reverse, so don't be afraid to duck back into cover. Suspension is quite strong on this tank, in AB a spaded Vickers Mk.1 can climb hills better than other vehicles. It can even tow other tanks up there if their suspension allows it. 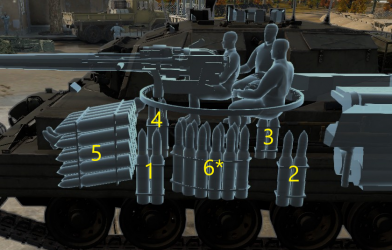 Ammo racks of the Vickers Mk.1

Although it can be done with its excellent reload speed of 5-7 seconds (crew skill depending), mixing ranks with the enemy is ill advised: instead take upon a sniping role. Your gun has only two types of ammo, both stock so research is not required for enhanced destruction. That being said, the APDS is a potent weapon that has 302 mm of pen at 100 m, falling to 252 mm at 2,500 m: all ranges can be targeted, with enemies moving towards more manoeuvrability over armour in the high ranks. However, the rounds lack spalling potential, so the damage inflicted on a tank interior must be in the APDS direct path past the penetration. If you aim for the turret weak spots, the barrel or breech will be your most common hits, incurring 20-30 precious seconds of repair time. If for any reason you're forced to engage while exposed, attempt to disable the enemy's gun or gunner first, before utilizing the excellent reload time to finish the target off.

The Vickers-Amstrong Company designed the Vickers Mk.1 in the sixties as a cheap and efficient variant of the Chieftain, ready to be exported. In 1961, India purchased the license for development, and Vickers-Armstrong helped to set up the factory. Over the course of its life, many variants were developed, including the Mk.2 and Mk.3. Later, Vickers Valiant(Mk.4) in 1977 and finally Mk.7 MBT. Currently, Kenya, Nigeria, and Tanzania are the foremost operators.