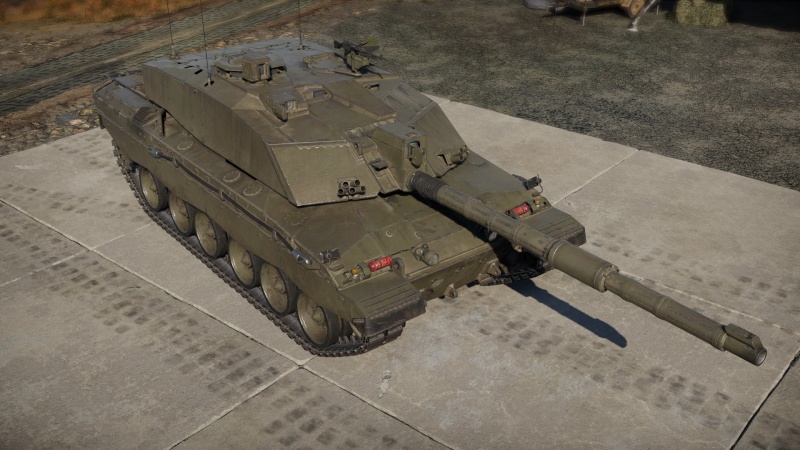 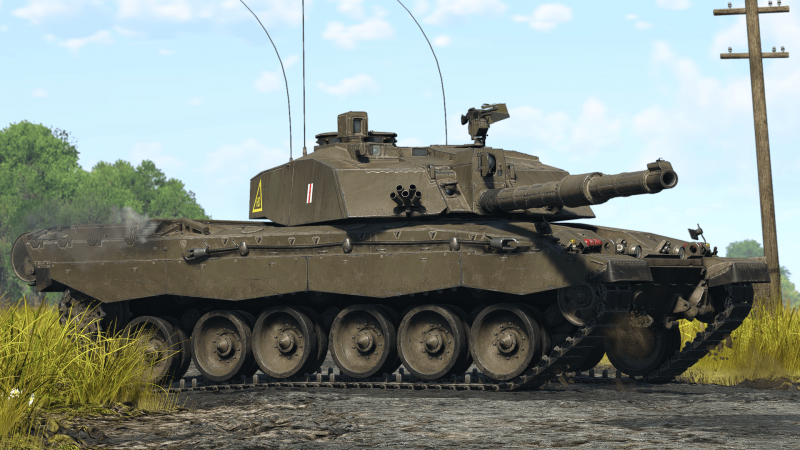 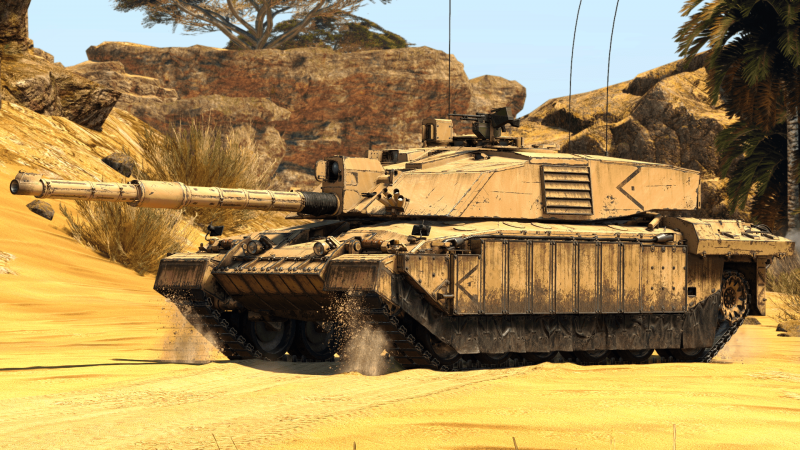 The Challenger 2 MBT is the epitome of British tank design; a direct result of all the experience gained over the previous British MBTs as the Chieftain and the Challenger 1.

The Challenger 2 is a force to be reckoned on the battlefield, thanks to competent grades in firepower and armour. On the other end, the vehicle's mobility is not excellent when placed against opponents such as the Leopard 2 which follows a distinct tank doctrine. Because of this, a skilled commander is required to take advantage of each of the strengths of the Challenger 2.

This vehicle design is dated back to 1986, therefore some technological aspects might be lacking when compared to more up-to-date adversaries. However, it is constantly updated with various modifications, allowing the CR2 to stand up against any of the tanks in real life and present in War Thunder.

The Challenger 2 reinforces the strengths of the Challenger 1 Mk.2/Mk.3, with extremely well protected turret cheeks and better UFP protection, while suffering from similar weaknesses - a particularly weak lower front plate and negligible side protection.

The Challenger 2 has a defined gun mantlet that is far larger in area compared to previous Challenger models. This mantlet is very weak in comparison to the rest of the turret, providing roughly 300 mm of RHAe protection, making it a glaring weak spot that easily results in the destruction of the gun breech and loss of turret crew. Additionally, the taller turret design exposes a weak frontal roof slope - while this is a somewhat small vulnerability, penetration may result in the gunner or commander's incapacitation.

Similarly to the Challenger 1s, the driver's hatch on the Challenger 2 is a significant weakness that compromises the well protected UFP. The hatch has no composite behind it and provides at best 100 mm of RHA protection. As such, the Challenger 2 thrives in hull-down positions where minimal vulnerabilities are exposed and it can retreat into further cover if one of the few weak spots are penetrated. In situations where protective positioning is not an option, the Challenger 2 should be used conservatively and carefully, avoiding direct confrontation wherever possible.

If direct melee confrontation with Soviet medium tanks is impossible to avoid, operator should note, that, due to design differences, Challenger 2 towers over tanks like T-64B and at point blank (almost ramming range), LFP becomes untargetable for them, while UFP and turret take such a high angle, that even upgraded APFSDS of theirs have problems penetrating them. While it's very unlikely that rank VI or VII player will be this startled, Challenger 2 can survive about two to three panic shots like this.

If the enemy was not confused by your aggression and immediately fired at driver's hatch or gun mantlet, the outcome will then be decided by amount of ammunition still stored inside of tank turret. If it was low enough, and the enemy didn't account for it, then, depending on shell used, tank will lose either driver, loader, gunner or gun breech.

During urban combat it is also important to remember, that Challenger 2 hull is very big and long, compared to small Soviet MBT. It can block entire street with just its hull if it was immobilized, rendering your teammates unable to assist. It is also very heavy and hard to push around, so they won't be able to just move you out of the way.

Keep yourself closer to walls and avoid narrow streets, if you ever need to be helped/towed.

The Challenger 2's primary armament is the 120 mm L30A1 cannon. Unlike most modern MBT cannons, the L30A1 is rifled as opposed to smoothbore. This is primarily due to the British preference for HESH ammunition availability (High-Explosive Squash Head), the design of which requires a rifled cannon for accurate fire. The rifled design has some positive attributes: it's extremely accurate with both HESH and APFSDS rounds, including at long range; however the downside is a limited selection of ammunition: the CR2 only has the L23A1, L26 and L27A1 APFSDS rounds, the L31A7 HESH round and the L34 Smoke round available to it.

The L30A1 has a base reload time of 6.5 seconds, improving to 5 seconds with an aced crew. As a result, the Challenger 2 sports the fastest reloading non-autoloaded 120 mm cannon in-game. In addition, the Challenger 2 allows the L30A1 a comfortable 10° of gun depression and a reasonable turret traverse speed.

The characteristics of the CR2 in combination with the L30A1 weight the vehicle towards a long-range sniping playstyle, generally the vehicle feels very comfortable doing as it minimises the inferior mobility of the vehicle by having it stay in the back, providing long range fire support and exploiting unaware enemies. 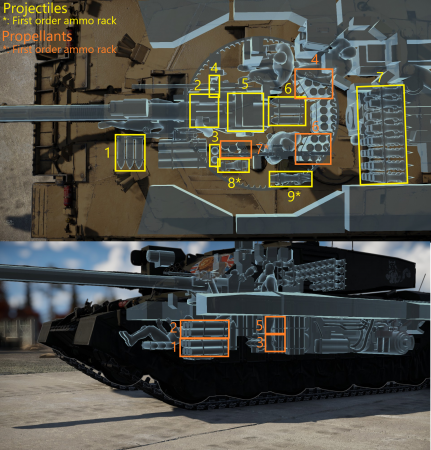 The Challenger 2 possesses one pintle-mounted 7.62 mm machine gun and one coaxial 7.62 mm machine gun. While these aren't particularly effective against tanks, they can be used as a aircraft deterrent, and lucky shots may result in critical damage or pilot snipes. Besides anti-aircraft fire, they're useful for clearing light obstacles and the crew of open-top vehicles.

The Challenger 2 excels as a sniper or a support tank, and should be played as such whenever possible; the farther the better. As such, it's important to try to find reasonable cover, regardless of the situation, with the ideal position being hull-down, preferably with some degree of angling available to maximise the bouncing capability of the frontal turret roof section. The Challenger 2 is the slowest of the top rank MBTs - a fact which is extremely important to keep in mind when using it - and as such should never be expected to rush points or used for quick flanks.

The CR2 is most comfortable in rural combat, where cover is generally plentiful and targets will often open themselves to fire when moving forward. This is particularly perceptible on maps such as Maginot Line, where, in most configurations, the main routes to capture points are open to snipers on hills throughout the landscape. In these situations the CR2 excels, able to hold a defensive position while protecting team members in faster MBTs and covering capture points.

The Challenger 2 is less agreeable in urban situations, where proper cover is more rare and its fatal weak points are often more exposed. In some situations, such as Alaska, the opportunity may arise to flank around the side roads and pick a somewhat protected position behind the ridges lining them. However, in other maps like American Desert or Cargo Port proper hull-down cover is sparse and the vehicle can only be utilised without proper protection. In situations such as this, the Challenger 2 is best played defensively holding angles and slowly pushing forward with careful attention to the local surroundings and where opposing vehicles may appear from.

Work on developing a successor to the Challenger 1 began only a short time after the vehicle entered service with the British armed forces. Already by the mid-1980s, the Vickers company had developed a new MBT as part of a private venture. After requirements for a next-generation MBT have been issued, Vickers immediately submitted their design on the new Challenger 2 to the Ministry of Defence. Having briefly considered the adoption of the M1 Abrams, the Ministry decided to proceed with the Vickers design by ordering the construction of a prototype Challenger 2 for testing and evaluation. The Challenger 2 passed the evaluation and met expectations even when put through comparative testing against contemporary MBTs of other nations, such as the American M1 Abrams and German Leopard 2. Satisfied with the test results, the Ministry of Defence adopted the Challenger 2 and placed the first production order in 1993, with the initial batch consisting of 127 tanks in addition to 13 trainer vehicles. The first Challenger 2 tanks were delivered to the tank regiments by 1994. The Challenger 2 participated in several operations during the '90s and into the 2000s, ranging from peacekeeping missions on the Balkans to military interventions in Iraq. A number of Challenger 2 MBTs have also been exported to Oman, with this nation being the only operator of the Challenger 2, besides the UK. Production of Challenger 2 tanks seized in 2002 after all pending production orders were fulfilled, with close to 440 vehicles being produced. Since 2008, Challenger 2 tanks have constantly been undergoing modernization work, with a number of upgrade packages being developed. Thanks to these upgrades, the Challenger 2 MBT is expected to serve with the British Army well into the future.