What are optics and where to look for them

Optics are a device used by vehicle crews to increase the magnification of the enemy being targeted for a more reliable targeting solution. Typically used in specific modes, optics come into play whenever using the sniper scope (gunner position) or the commander's binoculars (from commander's cupola).

When operating the Gunner scope, objects are initially seen with the scope set to the minimum zoom setting. To toggle between the minimum and maximum zoom settings, this can be achieved utilising the scrolling mouse wheel, pressing the default "zoom in" key Z or through any other key mapped specifically for this function on a keyboard, mouse or joystick/throttle controller.

When looking at a vehicle in the vehicle garage of War Thunder, vehicles with optics will show their location when looking at the vehicle in X-ray mode. Using the cursor to hover over the optic a pop-up bubble will appear annotating the device as an "optic", some will even have additional information listed in the pop-up bubble. Generally, if the vehicle has more than one set of optics, only one of them will list the zoom levels options and typically this will appear when hovering over the gunner's optics, however, this is not always the case and all optics may have to be checked for more information. 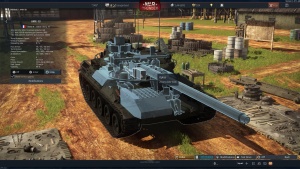 Optics on AMX-30. Due to the vehicle modules, the optics may be difficult to find and will require rotating the vehicle for a better view.

Some vehicles do not contain as much information as others and when the optic pop-up bubble only lists one zoom level, it is assumed that this is the maximum zoom available for the optics on this vehicle as in the Ho-Ri Production Japanese tank destroyer. 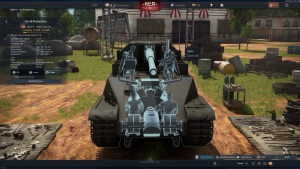 Optic pop-up only states Zoom:6.0x which is expected to be the maximum zoom capability for this unit.

Several vehicles may not have a zoom range specified, when it comes to these, it is best to take the vehicle out on a training run and choose a fixed object in which to compare the zoom rate in comparison to other vehicles with known zoom rates. This will provide a general range in which to have a better idea of what the optics are capable of during combat manoeuvres.

Optics themselves can be pivotal in the ability to disable an enemy tank or it can also be an Achilles' heel, especially for super-heavy tanks such as IS-7, in which the viewports where the optics are at providing a very weak point in the armour structure. Although they are extremely hard to target due to their extremely small size, nonetheless they can be hit.

Damage to the optics generally will not affect vehicle or crew gameplay at all, however, the optics will become unusable until they are repaired, which can affect certain vehicles (As an example, Warrior cannot launch ATGM if commander's optics were destroyed).

Differences between various optics in game

Optics zoom levels are an important indicator as to what type of tank is being used. Typically brawler tanks meant to be used on the front lines will not have much zoom capabilities beyond X4 as they are meant for up-close fighting and not long-range sniping. Tanks with zoom ranges of +X12 are meant for more reserve positions where they can maximize the zoom capabilities at disabling vehicles from a long distance. Those who are comfortable with the different vehicles and the optics located there can sometimes effectively push the limits of the optics and make the long-range shots with weaker optics or utilise a sniper-tank in close quarters battle.

An important note to remember in arcade mode is that it is easier to fine-tune gun aim with stronger magnification, especially if an enemy tank has only one small weak spot and you are limited on time. Also, the stronger the zoom is, the further apart the shell drop marks become making it slightly less confusing when estimating the shooting angle targeting solution.

Also worth noting, the optics of certain nations and/or vehicles may show vignetting or dark areas around the view area from a scope which limit the amount of area which can be viewed through the scope. As optics developed the vignetting lessened or virtually disappeared allowing for a larger viewing area.

Commander's binoculars always have about X6 zoom and same lenses across all vehicles.

The below screenshots were taken from the test drive map, always from a specific position on the edge between E-4 and D-4 (seen on the minimap) to allow for accurate comparison between vehicle optics being tested, especially with vehicles where the optic value is not known. The testing vehicle's hull front is always aligned towards the target to minimize a collision.

Weather settings for this test are at 16:00 and overcast. It surely would be easier to spot enemy at good weather, but when fighting in realistic battles tanks have camouflage and often begin engagements at the 2 km range. The potential of fog and other weather effects can make targets more difficult to see, therefore these testing purposes will use less than ideal circumstances to compare the different optics results.

In the screenshots, the target is always located exactly 1 km to ensure a more accurate comparison. The enemy tank which spawns at the back of the practice map is always different depending on the vehicle chosen for test-drive, however, it is generally standing exactly 1.2 km away from the testing spot.

When having problems coordinating the zoom level visually, utilising the compass at the top of the screen may help with the correlation - its size changes accordingly with the zoom level.

Click on an image and browse them with arrow keys/buttons on screenshot sides to make them easier to compare.

Sometimes tanks have extremely powerful X16 zoom while utilizing demolition cannon with low-velocity shells or extremely weak zoom (and very bad lenses at that) while utilizing high-velocity APDS or APDSFS. It makes ballistic marks on scope way too cramped or spaced out for comfortable use and in case of early HEAT, shells may make sniper scope unusable. Some, like rocket tanks, do not have ballistic marks at all and leave you all alone with your muscle memory. 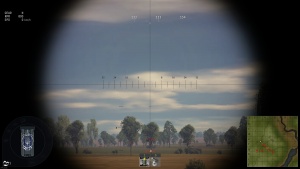 Clearly, this isn't going to work, and we don't want to fire blindly.

There are some ways to work around these problems:

To work around the problem, you can "zero in" the gun for a chosen shell to a certain distance, so that you can aim at targets directly. Also, some tanks like AMX-50 Foch have abysmal scope quality, but their rangefinder works faster than one of the others, making this method more viable than aiming yourself.

To activate this function, go to Controls->Tank->Miscellaneous->Sight distance control and enable "relative control", then assign buttons for "increase value" and "decrease value". Minimalistic settings look like this: 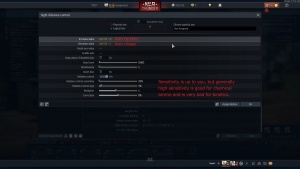 Minimal settings to set up the scope adjustment 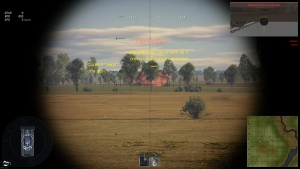 How to guess how far you need to "adjust" the gun?

In realistic mode, use "rangefinding" (key not assigned by default, can be found in Controls->Tank->Miscellaneous next to sight controls.) to find out the distance towards the hostile tank, or estimate it yourself, then set the gun to that number. Having an actual rangefinder modification and high "rangefinding" crew skill speeds the process up, increases the accuracy and maximum range of estimation.

Try to not set gun adjustment sensitivity too high or too low, or you may end up needing to aim in reverse. Remember, since your gun aims at a distance you set yourself, if someone drives too close to you, you now have to aim below them: 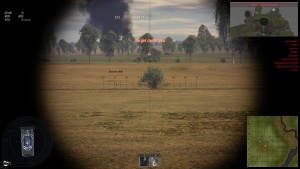 In Arcade mode gunner always tells you the distance towards the target you are pointing the crosshairs at and with no failure at that, which means you can just zero-in the scope to that exact number and your shell will almost always hit the mark, assuming you researched all the accuracy upgrades. Sometimes, it is much easier, than trying to make out the marks on your sight. For example, on X10 scopes the APDSFS scope does not have a reference number for 1.6 km distance, only the big "mark" representing it, which may be confusing to some players. 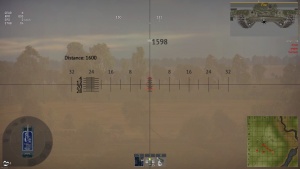 This may seem unnecessary, but when the enemy is behind a forest, a house and is very far away, it may actually save your tank.

Sometimes the scope is just unsalvageable and is unusable for a normal person without days of practice. For example, rocket tanks have no ballistic marks on a scope whatsoever, and even though it is possible to "zero" the scope on it, it won't even say you the distance it is set to fire at, which makes any fine-tuning impossible. This kind of problem needs radical fixing. 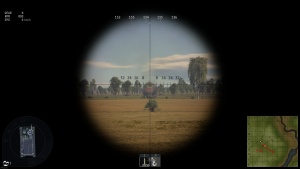 "How do we even aim with this?" is a very common question in the case of the Type 75 MLRS.

One option in War Thunder is the ability for users to create their own version of crosshairs found within the optics which may better fit with their gameplay style, streamline information presented or recreate a historically accurate representation. As such, default optics can be replaced with custom created systems. Each tank can be modified personally without affecting the rest.

The User-made optics quality heavily depends on the diligence of the creator. They share a common trait of being static (being unable to adjust to the changes of ammunition or the gun elevation) and often force the players to use manual gun adjustment at longer range, especially when utilising the default HEAT rounds, so use them at your own risk.

These changes do not affect zoom levels, gun characteristics or users abilities, they just change out the crosshair targeting application. However, even that much can make a huge difference to your life quality: 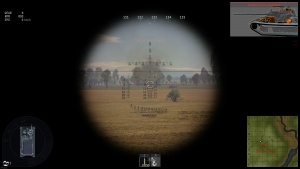 Rocket tank now has a scope and not only it kind of works, but the creator actually cared to add an ability to visibly zero-in the rockets, which makes it very easy to use for the player. 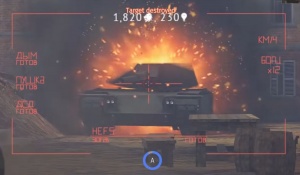 An example of a custom scope being simply used for immersion reasons (Do note, that the status text on the scope is fake and does not really represent the real state of a tank.)

For more details about creation and use of custom scopes relate to this specialized article.

For use around Wiki

Several tanks do not have specified zoom levels listed, however, after being checked and compared to the gallery in a test-drive map, that information can be listed in the "main armament" section of the chosen vehicle, either by simply noting the minimum and maximum zoom levels or by filling it with a small table much like below:

In the case where magnification values are not known, values can be listed as "X8.3 (estimated)" and then a vehicle can be linked in the Comparable optics area which has optics of a known value which accurately compare to the unknown value optics being tested.

In the case if tank has Night Vision Devices it is far more reasonable to use expanded table such as this:

If you were comparing optics of a tank to the gallery and are unsure of your measurements, you can specify that below the table.

Do note, that "commander view" for tanks represents binoculars (X6) and is same across all tanks as of patch 1.91.

Sometimes tanks are also fitted with Infrared spotlight. While it's not an optic device itself, it is only visible through night vision tools and can be used to find hostile tanks, thus it should be noted as well since it's a supplementary tool. Information about it can be filled in a small table as such: