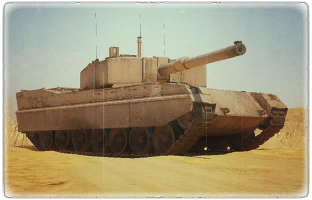 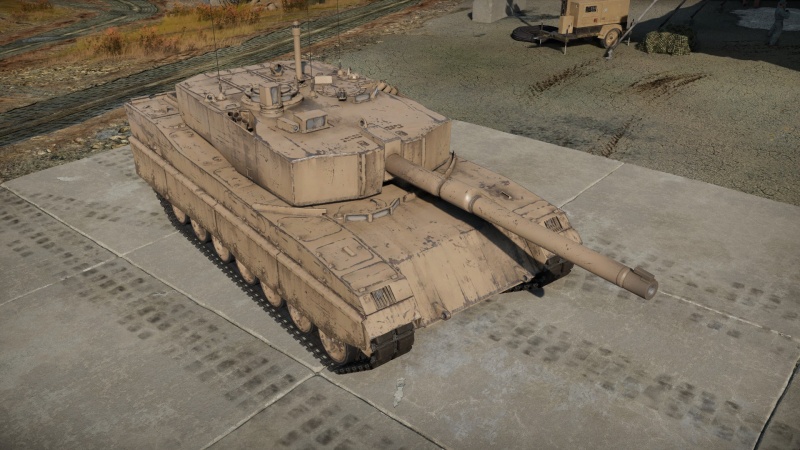 The TTD is a rank VII British medium tank with a battle rating of 9.7 (AB/RB/SB). It was introduced in Update "Ixwa Strike".

The armour on the TTD is decent, but not the best. The UFP can resist lower-tier 105 mm APFSDS rounds like the M735, DM23, and M774 while the turret can resist rounds such as 3BM22, DM33(105), M833 and Type 93. The TTD has blowout panels in the turret bustle for 16 rounds of first-stage ammo stowage, which can sometimes let you take a direct hit to the ammunition and survive. However, taking more then 17 rounds places ammunition in the hull next to the driver, which makes the tank's ammunition very vulnerable to detonation. Compared to the ammunition spread all across the tank in comparable BR British tanks, like the VFM5, Challenger Mk.2 and Challenger Mk.3, the TTD's ammunition stowage is far superior.

The budget of the program was cut in the 1990s due to a lack of a need for a new tank after the South African Border War ended in 1989. In order to salvage what they could from the program, the SADF and Armaments Corporation of South Africa (ARMSCOR) intended to produce a demonstrator vehicle using the technologies developed during the Loggim program. The single demonstrator vehicle was completed in 1992 and named the Tank Technology Demonstrator or TTD for short.

But, South Africa held its first free democratic elections in the year of 1994 which caused the removal of sanctions against South Africa importing and exporting military equipment. The SADF was reorganized and renamed to South African National Defence Force (SANDF) in the same year. It became clear that with the lifting of sanctions the SANDF would be able to purchase foreign main battle tanks (MBTs) so the need for the TTD was called into question. It was thought that 282 tanks would be needed to replace the Olifant Mk1A and Mk1B, but the project was cancelled and the TTD demonstrator was donated to the South African Armour Museum between 1996 and 1997.

The TTD had a conventional layout with a four man crew, a driver in the hull and the loader, commander, and gunner in the turret. The gunner's station was located on the right side of the turret towards the front. He was provided with a GS60 sight with x3 and x8 magnification as well as an integrated laser rangefinder and a thermal imaging channel. An auxiliary mechanical sight was also provided as a backup. The loader was located on the left side of the turret and was provided a single periscope as well as his own hatch for entry and exit. The commander's station was on the right side of the turret behind the gunner's station. The commander received a low profile cupola with six periscopes for 360 degrees of viewing. The commander also had a CS60N panoramic sight which could rotate 360 degrees and provided day/night capabilities with a third generation image intensifier. The zoom options provided were x3 and x10. The driver's station was located in the front center of the hull. Steering was by a yoke stick and other controls were provided by an analogue instrument panel. Three periscopes were provided for external viewing, with the ability to replace the central periscope with a passive night vision periscope. A hatch was provided in the roof as well as an escape hatch in the floor.

Mobility was one of the important characteristics that was required from the TTD project, and as such it featured a new powerplant and suspension system compared to earlier South African tanks. The engine used was a V8 diesel engine producing 1234 horsepower at 1,200 rpm. It could produce 4400 Nm of torque at 1,500 rpm which resulted in a fast acceleration from 0 to 30 km/h in 5.1 seconds. The cooling system was a water-to-air type and measures were also taken to reduce the infrared (IR) signature of the vehicle. A management system was implemented to control engine power output compared to the temperature, preventing the engine from going above 48°C (118°F). The transmission used was an automatic 4F 2R cross-drive transmission with four forward gears and two reverse gears. In order to increase fuel efficiency, the engine was capable of switching from eight to four cylinders when not moving, and the TTD could also turn on the spot (pivot). The maximum attainable speed of the TTD was 71 km/h on road and 35 km/h off-road. The reverse speed was up to 32 km/h.

The suspension was of a torsion bar type with seven dual road wheels, a rear drive sprocket and a front idler, and four return rollers. The TTD had the ability to vary the amount of track links used in order to choose the track tension, with 102 to 112 track links. The brake system was capable of bringing the vehicle to a complete stop from 56 km/h in only 6.8 seconds. The TTD could maintain a ground pressure of 0.93 kg/cm2. It could climb a 60% gradient, a side slope of 30% and cross a 3.5 m trench. The maximum fording depth of an unprepared TTD was 1.5 m.

The TTD was provided with a 1,600 liter (422 gallon) fuel tank, allowing it to achieve a range of 400 km on ideal terrain, 300 km off-road, and 150 km on sand. The vehicle was equipped with radios for effective command and control. A drinking water tank was fitted to provide the crew with 80 liters (20 gallons) of water; it could be accessed from the driver and loader's stations. Also, the tank was fitted with a fume extractor to prevent noxious fumes from building up inside after firing the main gun.

The main gun was a 105 mm rifled GT3 gun produced by LEW as a license-built version of the British Royal Ordnance L7. 54 105 mm projectiles were provided, with six in the turret basket, sixteen in a rotating carousel, and thirty-two in a rack to the left of the driver. The gun could fire APFSDS, HEAT, HESH, and HE ammunition types. It was planned to replace the 105 mm gun with a 120 mm smoothbore on production versions but it never entered production and a 120 mm gun was never fitted. The main gun has an elevation range of 10 degrees of depression and 20 degrees of elevation.

An electro-mechanical 48VDC gun drive was used along with a digital fire control system (FCS). The RS485 databus was used in the FCS to allow hunter-killer operation with the gunner and commander searching for targets independently and then fixing the gun onto the target either by the gunner's controls or commander's manual override. The turret could rotate 360 degrees in less than ten seconds while the gun could elevate at 34 degrees per second. Time from identification of a target to firing on the target was achieved at nine seconds. A muzzle reference system (MRS) was fitted.

The frontal armour of the TTD utilized composite structures in order to increase its effectiveness over plain steel armour. Both the upper glacis of the hull and turret front used composite armour which was claimed to protect against 125 mm APFSDS and HEAT rounds. The sides of the vehicle were protected against 23 mm rounds while the roof protected against 155 mm airburst rounds. The underside of the vehicle protected against anti-tank mines. A spall liner was fitted to the interior of the crew compartment to better protect the crew from shrapnel and fragments. Also, an automated fire suppression system was fitted in the crew compartment, as well as a second system in the engine compartment. The turret bustle ammunition stowage was also fitted with blowout panels to vent an ammunition detonation away from the crew compartment in the case ammunition was hit by enemy fire. A total of eight smoke grenade launchers were provided with a bank of four on each side of the turret, as well as an engine exhaust smoke system.

After the Loggim program and its TTD were cancelled the SANDF chose not to buy a foreign MBT either as there was no room in the budget. Instead, 26 of the Olifant tanks were upgraded to the Olifant Mk.2 standard from 2000 to 2005.[1]