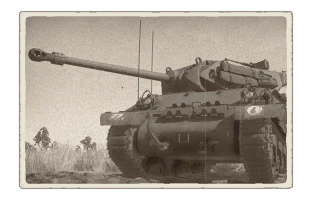 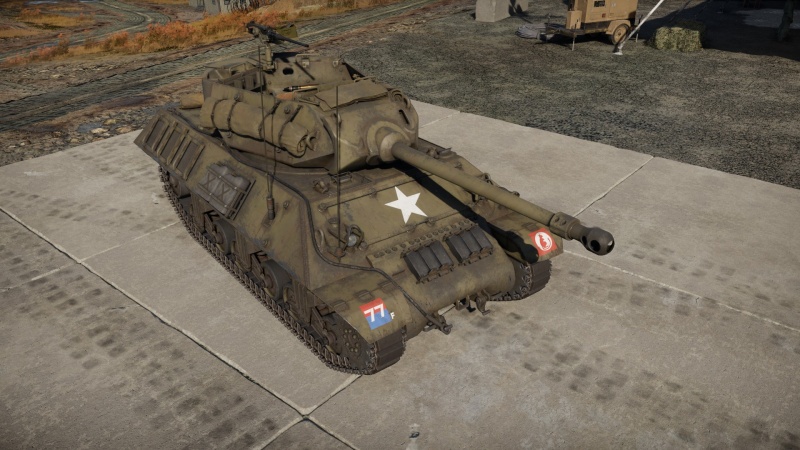 The Achilles is based on the American M10 GMC, but carries a 17-pounder cannon as the main armament, making it an effective tank destroyer. Thanks to a well assigned BR, the Achilles won't feel in the wrong game even when facing higher rank tanks. The Achilles has plenty of firepower, especially once the Mk.8 APCBC shot is unlocked, which is more effective against the T-34's sloped armour. The 17-pdr cuts through enemy Panzer III and IV (the shots enter the front and exit from the rear) so try to aim vital points to cause the maximum damage (first shot to the turret to disable enemy firepower). The T-34 is a bigger problem due to its sloped armour. When facing Russian tanks, the first shot should always be to the gunner. The Mk.8 APCBC is quite able to penetrate the T-34 glacis even from a distance but keep in mind that the damage caused is unreliable (sometimes two or more shots are required to destroy a T-34, sometimes one shot is enough). The M10 mobility is not outstanding, but the Achilles is pretty capable to carry the player, the gun, and the team to where it needs to go.

Protection is not good. The sloped armour and the track links added to the front will protect the Achilles from some low calibre shots, but the vast majority of the enemies will be able to destroy the Achilles easily. Side armour is paper thin. The high profile and the very slow turret traverse (man-powered) are not suitable for close range combat so avoid deep flanking tactics. 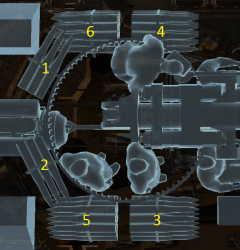 Ammo racks of the Achilles.

The Achilles is best used for sniping and shoot and scoot tactics. Find a good spot where to shoot at enemies, aim carefully (RB need a good use of mils range estimation) and enjoy the fireworks! To make full use of its decent sniping capacity, find a spot that:

With a location like that, the Achilles can utilise its -10° gun depression and use hull down. Its turret front and mantlet can consistently cause ricochets especially in a downtier. Looming behind bushes, an Achille's well aimed shots should be able to knock out most enemy tanks at the battle-rating range from long range. Even if you get spotted, any slope or hard covers will provide protection for you.

Keep in mind the low fire rate (compared to other 17-pdr AFVs). Once the Achilles has destroyed (or damaged) the enemy the best thing to do is to relocate. Don't stay in the same spot for too long: the Achilles has weak armour and an open top. Artillery barrages will cripple the Achilles or the crew.

Another thing to think about is the turret traverse. Yes... It is **really** slow. Therefore, some changes need to be made in the typical play style. If the Achilles need to target an enemy quickly, do not rely on the turret. Instead, traverse the entire tank so that the hull is facing the enemy head-on, similar to turretless, casemate style tank destroyers. To avoid situations like this, stay way back, avoiding urban areas and other areas where the Achilles will be flanked easily.

R3 T20 FA-HS: this vehicle is the exact opposite tank when comparing to an Achilles: extremely high topspeed, great traverse and fast gun rotation. A well-maneuvered R3 can easily circle around the Achilles and shoot AP shells through the thin side, while the Achilles struggles to get the gun on target even when traversing the hull with the gun. If you know an R3 is around, you better turn your hull towards the possible direction and be ready to engage. Move the hull with the gun to target quicker. Even if you miss, the M2 Browning can still penetrate the R3 and knock out its crews. Note that a side shot on the R3 does not guarantee a kill as the crew are pretty separated. The R3 can run away and repair for another attack. A frontal shot, however, is likely to one shot it as the crew are all lined up.

The M10 tank destroyer was developed in 1942 to fulfil the anti-tank doctrine established by the US military. The doctrine, creating the tank destroyer force, was established with the objective to stop German blitzkrieg tactics by attacking the tanks. Unlike the other armoured fighting vehicles in the theatre, the tank destroyers were made to be placed in reserves to counter any breach in the front lines by taking out the enemy with ambushes. This role led to the desire for a fast vehicle with a powerful gun; armour was not a concern due to the emphasis in speed. The design ended up taking a turret design developed from the M6A1 Heavy Tank and the body from the M4A2 Sherman, this with the 3-inch 1918 gun, provided the backbone of the American tank destroyer force in much of World War II. In total, 6,706 M10s and its variants were produced between September of 1942 to 1943 of the same month.

These M10s were given out to America's allies, though the British were the most well-known of these users, receiving about 1,650 M10s from the Americans from 1943 onward. The British designated the M10s under their service as the Achilles and unlike popular usage, was called that for both the 3-inch gun variant (Achilles I/II) and the variant mounting the 17-pounder (Achillies Ic / IIc). Though in most usage, the vehicle was called the 17pdr M10, or 17pdr SP M10, or even the "Firefly", despite that name being used for a different design.

The British first received the M10s with the 3-inch cannons, which were much more powerful than the British tank armament at the time, giving them an edge in many tank confrontations in the North African Campaign. It was around 1943 that conversion is done onto the M10 to increase its firepower capabilities against the gradually upgraded German tank designs such as the Tiger I and the Panthers. The conversion used one of the best Allied anti-tank guns at the time, the 17-pounder, which could penetrate about 140 mm of armour at 500 meters away with APCBC rounds, and 209 mm at the same distance with APDS rounds (Armour-Penetrating Discarding Sabot). The conversion is done onto the M10 also required a counterweight to be placed on the 17-pounder to compensate the heavier weight of the 17-pounder compared to the 3-inch gun. This gave the M10 Achilles a much more defining profile and attempts were made to hide this larger cannon length with optical illusion. Aside from the gun conversion, the M10 Achilles also had an extra 17 mm of armour welded onto the front and sides of the hull for added protection, plus a 20 mm shield on the top of the turret to compensate for the open-turret design. About 1,000 M10 Achilles with the 17-pounders were ordered, but by D-Day, only 124 were available, and 816 were done by the end of the year. The low number of these converted Achilles made meant that any lost units were hard to replace with a 17-pounder one, and the disgruntled crew would be issued an M10 with a 3-inch gun instead. In the end, about a total of 1,000 Achilles were converted into 17-pounder ones by the end of World War II, making the M10 Achilles the second-most numerous design to mount the 17-pounder, coming before the Sherman Firefly.

The Achilles were issued out as part of the Royal Artillery in armoured divisions in anti-tank regiments. One of such regiments was the 65th Anti-Tank Regiment assigned to the 7th Armoured division during 1942 and onward until the end of the war.

The British doctrine with the Achilles differed from the Americans who saw it as a reserve tank destroyer. The British viewed the Achilles as a mobile anti-tank gun, thus the Achilles served in a role akin to the StuG III in German service, moving the 17-pounder into position to take a shot on incoming German Tiger or Panther tanks. These Achilles were used more with Churchill tank units rather than the medium tanks due to the lack of 17-pounder equipped on Churchills while the medium tanks have the Firefly available for use. Disadvantages with the M10 Achilles design were carried over from the original, the slow turret traverse speed, high profile, and open-top turret made it a rather harder vehicle to use than a regular tank, but it still had its advantages and was still suitable for the role it had.

The Achilles were deployed on D-Day onward in artillery forces in anti-tank regiments in armoured divisions. A typical anti-tank regiment would have four batteries, two with towed 17-pounders, one equipped with 17-pounder Achilles, and another with regular M10s with the 3-inch gun (though replaced with another Achilles unit once more were available). A notable event with the Achilles was during Operation Charnwood, where Achilles in the 62nd Anti-Tank Regiment fought off a German counterattack comprising of Panzer IVs and Panthers from the 12th Panzer Regiment were routed by the Achilles 17-pounder fires, destroying about 13 German tanks with the loss of four Achilles knocked out and four more damaged.