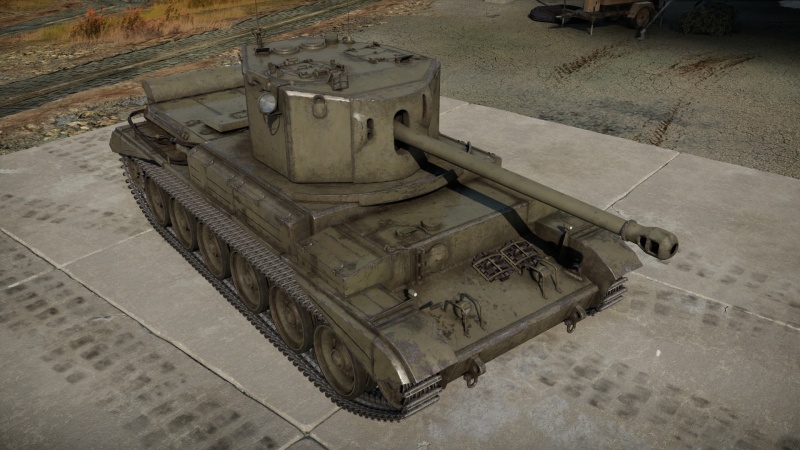 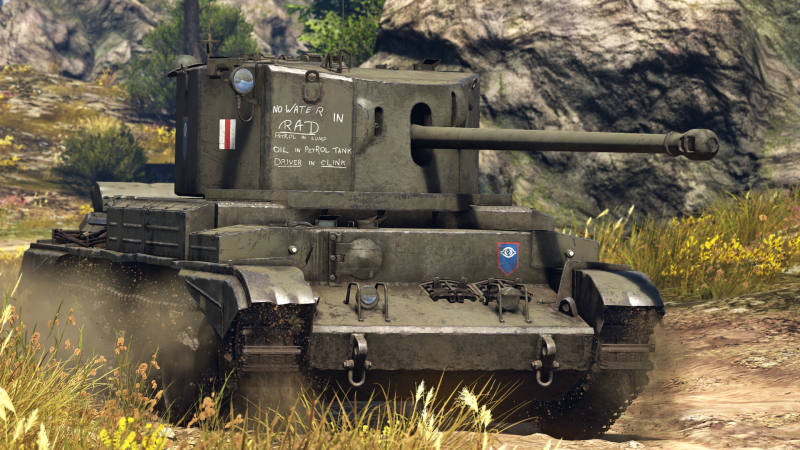 The Tank, Cruiser, Challenger (A30) is a rank III British medium tank with a battle rating of 5.0 (AB) and 5.3 (RB/SB). It was introduced in Update 1.55 "Royal Armour" alongside the rest of the British Ground Forces Tree. Taking the outdated Cromwell chassis, extending it and adding a new turret, it gave life to this improved variant with the much powerful 17-pounder anti-tank gun.

The armour on the Challenger is not to be relied on as it is both very thin and poorly angled. The turret armour is capable of bouncing or absorbing a few shots, however this is not to be relied upon. The hull has the same poor armour as the Cromwell, but due to the vehicle's neutral steering capability, should an enemy go for the front plate you can angle it adequately against contemporary medium cannons, however exposing your side is a death sentence, especially against APHE projectiles.

The lengthened Cromwell chassis provides the Challenger with excellent mobility. The vehicle is able to reach its top speed of 52 km/h fairly quickly. The Challenger is responsive both at low and high speeds. The centre of gravity is quite high, to the point that one track will lift up when making a significant enough turn. The Challenger has an awful reverse speed, it should not be relied upon. In most situations it's more viable to use the neutral steering capability of the vehicle to completely turn around and drive in the other direction.

The Challenger features the 76 mm QF 17-pounder, a weapon more than capable of dealing with all adversaries the Challenger will encounter, even Soviet heavy tanks (IS-1, KV-85, etc.) and German tanks like the Panthers and Tiger Is.

While the highest penetrating round available to the Challenger is the Shot SV Mk.1, this round is both inaccurate and does very little spall damage. Because of this it is recommended to use the Shot Mk.8 the majority of the time as its penetration is sufficient, and as it is able to knock out enemies with a single shot due to great spalling. The Shot SV Mk.1 can still be brought for long range engagements. 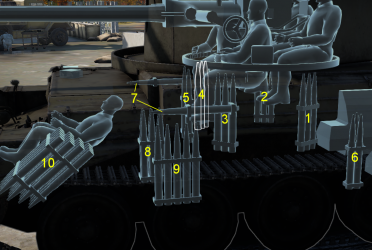 Ammo racks of the Challenger

Uses now default x6 scope of the British. As of rank III, this scope is slightly or moderately superior to most medium and heavy tanks, but do not expect to outsnipe German SPG as they have same optics or even better.

With Challenger being on the edge in between rank III and IV it is possible to get into rank IV battle with full up-tier. In that case, the tank optics are no longer superior to most opponents.

In particular, do not let Japanese medium tanks ST-A1 get an upper hand at all costs, as they have optics eclipsing these of Challenger at long ranges and might as well snipe Challenger from 2 km away, if they have accuracy modifications.

This tank has a high penetration gun (with APDS), great manoeuvrability, and good speed. However, it has extremely weak armour, terrible reverse, and quite a high profile. As such it requires some skill to use. It excels as a sniper or an ambushing tank destroyer, waiting for the enemy to come into its sights and firing from a point of advantage. It is also a good flanker due to its speed and manoeuvrability getting around the enemy and hitting them from the side or back.

Do not attempt to brawl or use this vehicle as a front line tank. The Challenger cannot afford to take even a single hit from enemy tanks, and it will be up against German 88 mm and Soviet 85 or 122 mm guns which will easily take it out in one shot. The poor reverse speed also makes hit and run tactics a bad choice.

When in its stock form, this tank will be quite frustrating to play. The stock AP round bounces often and does very little damage, it is also quite hard to aim at range. The first aim upon getting this tank should be to unlock the better AP shell and the APDS as soon as possible. With these rounds, the Challenger can easily penetrate most of the tanks that it faces.