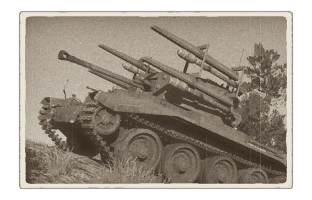 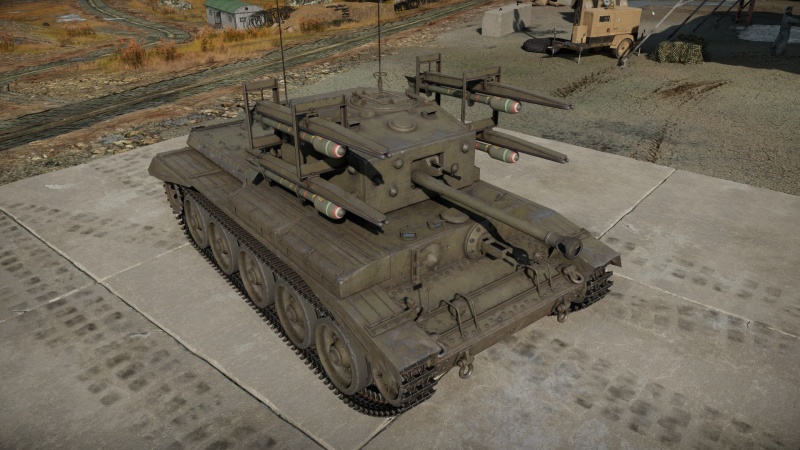 The Tank, Cruiser, Mk VIII, Cromwell V (A27M) (RP-3) (or just Cromwell V (RP-3)) is a premium rank II British medium tank with a battle rating of 3.0 (AB) and 3.3 (RB/SB). It was introduced in Update 1.59 "Flaming Arrows". Equipped with four 152 mm RP-3 rockets with a relatively straight trajectory, the Cromwell RP-3 could be played with more precision than its other rocket-bearing contemporaries like the T34 Calliope.

The Cromwell RP-3 is very similar to the Cromwell V in terms of armour, mobility, and armament. The 75 mm gun can help do damage to tanks of the same class like the Panzer IV, using its speed to get to an angle to hit the weaker points of the enemy tanks. However, the Cromwell RP-3 is equipped with four rockets on the turret. Unlike its contemporaries, which often has the rockets on racks above the turret, the rocket integrated on the turret allows for better aiming with the rockets in-game than the others. In the range of around 500 m, the rockets can be aimed by use of the gun's aiming sight. Though practice is needed to get the feel of the rocket's landing point, this is a lot better than simply lobbing rockets after rockets in hope that one will hit. 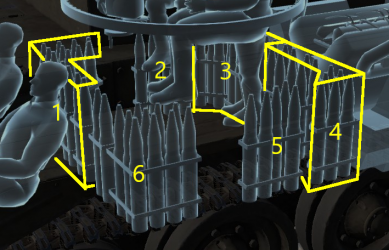 Ammo racks of the Cromwell V 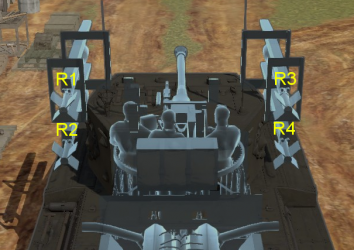 The Cromwell RP-3 should not fight tanks in a head-on battle due to the relatively unsloped frontal armour. As such, the mobility of the Cromwell should be exploited to get to the blind spots of an enemy tank and fire at them from there with the 75 mm gun or the rockets.

The Cromwell fighting prowess is due to its manoeuvrability and gun rotation. This is thanks to the combination of the Rover Meteor engine, essentially a Rolls-Royce Merlin of Spitfire fame with the supercharger removed, and its Merrit-Brown triple-differential transmission. This gives the Cromwell power even while it manoeuvres so it maintains speed much better than those tanks using traditional clutch-and-brake systems like practically everything in this BR. This not only allows it to spin in place and easily run around obstacles, but it can also out-climb almost every tank in the game, allowing it to go places the enemy might not expect to find you. But mostly this gives it unmatched speed, allowing you to reach the good sniping spots before anyone else in the match. But there is a down side to the Cromwell's amazing speed, Going in reverse will only let you go up to 3 km/h, and rarely will you be able to damage a tank enough to get a similarly effective second shot; either the tanks was still drivable and retreated to cover, angled to best bounce your next shot, or 1 shot you in return with APHE.

Once upgraded, the Cromwell's turret rotation is one of the best for the rank, only beaten by the T-34 that has a rotation speed of 29°/s (fully aced crew). This allows an upgraded Cromwell to quickly engage targets in different angles, important for close-quarter fighting. German tanks will come close to you but not be able to catch up with you in some situations, but this being said; do not go into the hell of battle thinking "My turret rotation is fast enough to best all of youse!" because that will get the Cromwell destroyed by a tank who only needs to hit your turret from the front to disable you. And as said before your reverse speed isn't that fast so if you are in this situation all you can do is pray and hope that your team mates come up to help you out or in worst case scenario the Cromwell gets destroyed straight away from a side on hit. But instead help out the team from a distance of around 0-550m or if you feel like sniping from a distance your max range is 850m.

The downside to this tank is its thin hull armour, especially on the sides. Everything on the map can penetrate the Cromwell hull, even from the front. This includes SPAAs, who will easily tear the Cromwell apart, especially the Wirbelwind that will do so at almost all ranges typically encountered and any angle. The Cromwell's turret is somewhat better off, with just over 60 mm on the front and sides, but the flat plates are easily penetrated by any type of shell. The closely packed interior means it's a one-hit-to-burn design for anything with a 75 mm, and at 3.3 BR these will be on almost all tanks you face. Keep moving! If you take a shot or get shot at, re-position, don't ever try to fight it out. You're so much faster and more manoeuvrable than anything you meet that you can almost always find a better location to go after any target. Just don't try to reverse; it's single reverse gear gets you 2 mph (3 km/h), meaning you're likely better off spinning in place and then driving away.

Production of the tank began in November 1942 with new names given out to the tanks. The original A24 Cromwell I from Nuffield was renamed the Cavalier, the Liberty powered Cromwell II became the Centaur, and the Meteor powered Cromwell III retained the name as the Cromwell. The actual Cromwell tank production was delayed until January 1943 due to low supply of Meteor engines until the Rover factory began producing it. With more Meteor engines being produced, the Centaur tanks were often converted to use the Meteor engine, turning them into Cromwells. Field tests with the tanks took place in August to September in 1943 alongside the M4A2 and M4A4 Shermans. The tests proved the Shermans to be more reliable than the Cromwell and Centaurs, needing only about 0.03 hours of mechanical attention every mile compared to the Cromwell's 0.07 hours per mile and the Centaur's 0.08 hours per mile. The two tanks were thus given time to iron out these deficiencies, the Cromwell suffered from oil leaks along with brake and clutch failures. While the tank suffered from these defects, the crews expressed their satisfaction of the designs for their speed and handling, but the Centaur was not given the same attention as the Cromwell. A second test in November had the Cromwell perform with improved results while the Centaur was still experiencing the same problems. The production model was finalized on February 2, 1944 after a specifications for a "Battle Cromwell" came in from Leyland, which included some design changes, an increase of 6 mm on the bottom of the tank, seam welding the joints, and the standard usage of the Meteor engine and the Merritt Brown transmission. The Centaur was relegated to training roles or modified for specialist roles such as anti-aircraft guns or engineering vehicles. Total production for the A27 tank series is 4,016 tanks, of which 950 are Centaurs and 3,066 are Cromwells.

The Cromwell's frame used a riveted construction in its initial production models, but this later changed to welding. The frame was strengthened with bolted armour plates. Companies involved in the A27 production were LMS Railway, Morris Motors, Metro-Cammell, Birmingham Railway Carriage & Wagon Company, and English Electric. Some of these models were not consistent in construction, such as some variants built with 360 mm wide tracks and some with 393 mm tracks. Suspension was the Christie suspension derived from the earlier cruiser tank designs. Four of the tanks's road wheels have shock absorbers, and no return rollers are available, the tracks are supported on the top of the large road wheels. The gearbox has five forward and one reverse gear, with the first forward gear made for confined areas and sharp turns. While the Meteor engine is capable of going faster, it is restricted to 540 hp output with a governor to avoid straining the engine and suspension. The Cromwell's armaments changed over a few times, it's initial model mounted the 6-pounder gun, but the later models mounted the 75 mm gun. The adaption was easy due to the 75 mm gun being a 6-pounder bored for the larger calibre. A 7.92 mm BESA machine gun was available for coaxial firing on the turret. The armour on the Cromwell started as a 76 mm plate, which increased gradually to 83 mm and 100 mm over time for additional protection.

The A27M Cromwell V was Cromwell variant that used the 75 mm gun and a welded construction, no riveting was used in the frame.