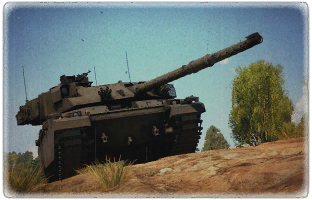 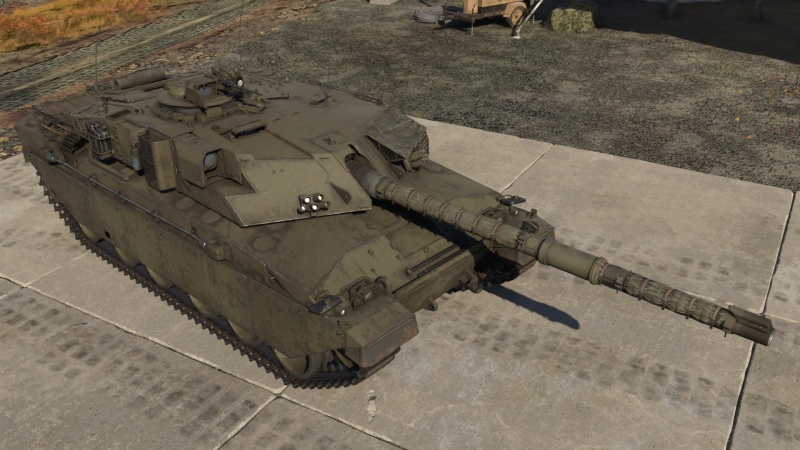 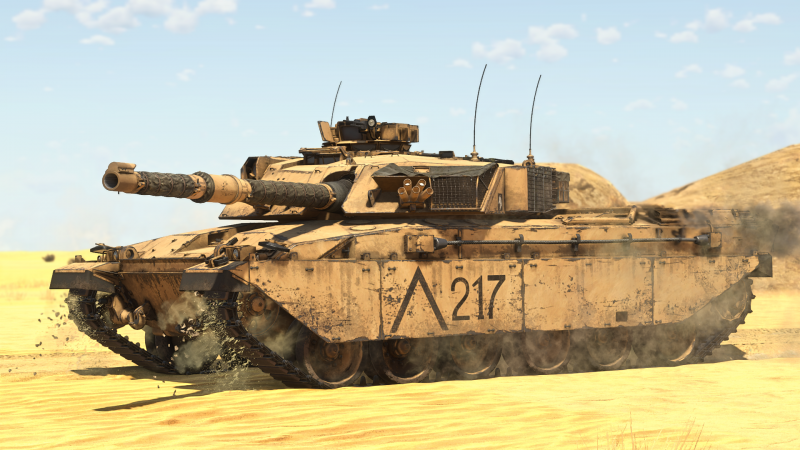 Like the Chieftain Mk 10, the Challenger has a very strong turret front, with composite armour protecting the entire front and part of the sides. The turret front can resist up to 470 mm of rolled homogeneous armour equivalency (RHAe) against long-rod kinetic (~550 mm RHAe against rounds without the long-rod slope modifier) and up to 600 mm against chemical penetrators. This theoretically makes the strongest part of the turret frontally invulnerable to all but the top-rank kinetic ammunition in the game. In practice, however, there is a weak spot on the lower leading edge of the turret front, where the backing plate of the composite inside the turret flattens to a 90° angle. This reduces the effective thickness of the lower turret cheeks by approximately 100 mm, making it vulnerable to most long-rod APFSDS. A small portion of the turret front, the area just around the gun, is unprotected by composite armour and is 200 mm of CHA with a 50 mm RHA spall liner. This area extends above the gun and transitions to 60 mm CHA at 60°. While these areas are small and unlikely to lead to catastrophic damage when hit (the gun breech will tend to soak up shrapnel), they are important to be wary of.

Compared its turret, the Challenger hull is significantly weaker against kinetic projectiles with only 220 mm of RHAe (~300 mm for projectiles without the long-rod slope modifier) on the UFP. Chemical protection in this area is similar to the turret at 600 mm RHAe. An exception to these numbers is the area directly above the driver's hatch, which is not covered by composite armour and is vulnerable to essentially any anti-tank ammunition. The lower frontal plate is also lacking composite and is comprised of a single 70 mm RHA plate at a slight angle, providing ~80-90 mm of effective thickness. Shots to the LFP will at least incapacitate the driver, or more likely catastrophically detonate the hull ammunition. British tankers should be quite used to this weak spot by this point, as the weak LFP is present on the entire Chieftain line. However, the upper third of the LFP shares some of the UFP's composite protection due to its design. This means that the upper third of the LFP has slightly more protection than the lower sections.

The Challenger Mk.2's speed sets it apart from the previous Chieftain tanks, as it is capable of reaching 56 km/h on roads and 46 km/h off-road. Reverse speed is also a noticeable improvement from the Chieftain line. Despite this, the 62 ton mass of this vehicle makes it the slowest of its high-rank contemporaries (e.g. Abrams, Leopard, and Type 90).

The FPE module should be a priority, since the fuel tanks are located all around the hull above the tracks, meaning that the tank will be set on fire often. This comes with added protection, however, as the fuel tanks will frequently absorb most shrapnel - protecting the crew and ammunition from the occasional side-shot - giving the player ample time to return fire and eliminate the threat.

The Challenger bears the 120 mm L11A5, an updated but essentially identical version of the gun found on the Chieftains. It has access to the same rounds as the Chieftain Mk 10, with the notable addition of the L23A1 APFSDS ammunition. L23A1 penetrates angled armour much more efficiently than its predecessor L23, making it especially useful for dealing with Russian late T-series hulls. 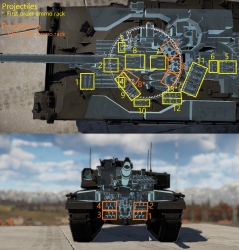 Ammo racks of the Challenger Mk.2

New drivers of the Challenger 1 will appreciate a similar playstyle to the earlier Chieftain tanks, particularly the Chieftain Mk 10. Most of the armour's weak points could be minimized by assuming a hull-down position on the incline of a hill, and using the Challenger's excellent -10° of gun depression to keep the gun on target. This will increase the angle of the turret and thus increase the effective thickness of the back-plate on the turret.

In 1977, the Iranian government ordered an improved version of the Chieftain tank, which was arguably the best main battle tank (MBT) in service at its time. The Chieftain offered unparalleled protection and firepower; however, its mobility was lacklustre and something its successor needed to improve upon. In response, the engineers at the MVEE created the Chieftain Mk.5(P), from which three additional prototypes were created. It was one of these prototypes that would become the basis for the Challenger 1. Unfortunately, after the Iranian Revolution of 1979 and the fall of the Shah, Iran canceled its order for an improved Chieftain. In addition, a parallel British tank project (the MBT90) was also abandoned, and the British Army quickly became a new potential customer for a new MBT.

The Challenger's design was based on the cancelled project called "Shir-2"" planned for export to Iran, and retained its deadly 120 mm gun and superb armour. The Challenger was also equipped with Chobham armour, a composite armour made from multiple layers of different materials. The additional materials gave the Challenger its distinctive, heavily-sloped armour on the front of the turret and upper glacis. The Challenger's mobility and off-road capabilities were significantly improved with the installation of a new 1,200 horsepower Rolls-Royce engine and hydropneumatic suspension. The Challenger 1 entered production and service in 1983. Production ended in 1990, having yielded a total of about 420 vehicles. It served primarily with British forces during the Gulf War. It was also used in peacekeeping missions in Bosnia-Herzegovina during the mid 1990s, and Jordan still operates a number of Challenger 1 tanks to this day. The Challenger 1 was withdrawn from active service by 2001 and later replaced by the Challenger 2.