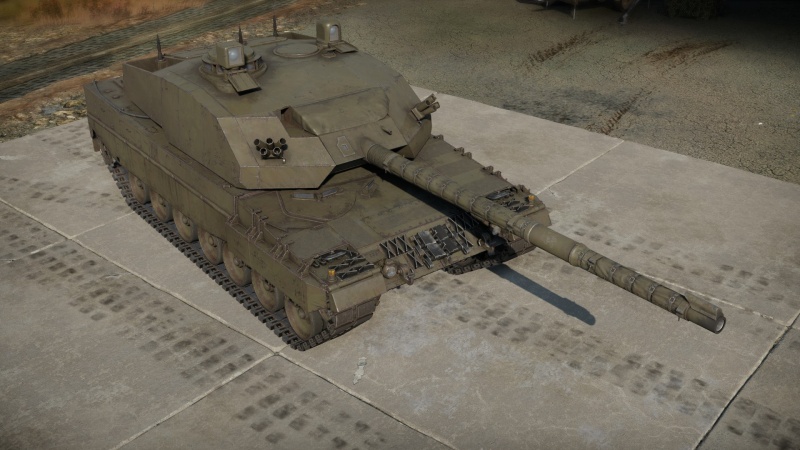 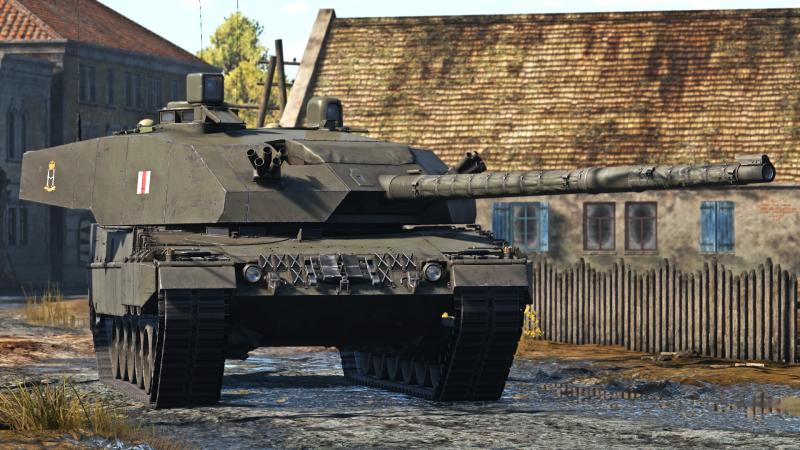 The Vickers Mk.7 is a prototype tank design by Vickers during the 1980s. The tank featured a capable fire control system, an effective and tested L11 120 mm gun, similar to those on the Chieftains and as a novelty for the British tech tree, the turret is mounted on the chassis of a Leopard 2.

This very raw input in mobility from the Leopard's engine, matched with the sturdy Chobham armour inside the Vickers turret, grants the veteran tankers of the British tree a fairly unique and dynamic balance of mobility, firepower and armour for a variety of playstyle options.

The tank is not only well balanced in the 3 main categories, but is also armed with improved TOGS, laser rangefinders and various smoke discharging equipment; turning this MBT into a dangerous opponent to meet on the battlefield. 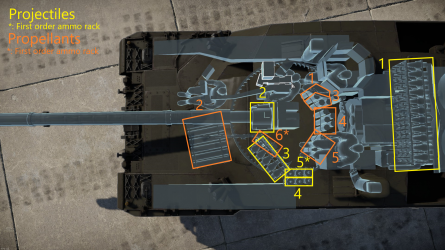 Close quarters combat is one of the most risky engagements in the game, but thanks to the superb armour of the Vickers Mk.7, it is able to have multiple engagement modes when in CQC.

Vickers Mk.7 can be used as the tank who will push through the enemy line due to its armour. Be aware of how the chassis is poked between corners as the hull is only armoured in the frontal plate. Any shot fired at the track's sprocket can be fatal as there is no armour to stop the incoming shell. When fighting in an uptier, avoid being the battering ram as all 10.3-10.7 vehicles can punch through any part of the frontal armour (including turret) and destroy the tank in a couple of shots. Be aware of facing enemy tanks like the Leopard 2A6 and Leclerc S2 which have extremely powerful APFSDS rounds that will go through the Vickers Mk.7's armour like hot knife through butter. When in a downtier, you are able to be the battering ram as only a couple vehicles at the battle rating will be able to pierce through your armour (tanks like the Type 16, T-62M-1 and Type 74 will be able to punch through your armour between 8.7 and 9.7, be aware as they penetrate between 405 mm and 450 mm of armour with APFSDS). Try to stick with people behind you so friendlies can assist you if needed, sometimes who can pull you with a winch could save both's life.

Due to the high survivability, the Vickers Mk.7 is able to hold defensive positions (cap points, strategic locations, etc) quite well, as well as repelling and counter-attacking any aggressor with ease. Due to its powerful engine and transmission, it is able to move forward, fire, and move backwards in quick succession.

*Note: the Vickers Mk.7 most prominent weak spot in the turret is the mantlet, always be on the lookout to hide it as much as possible or by wobbling your turret a little so enemies have a smaller chance to hit the mantlet.

Due to the longer ranges compared to the urban combat, the Vickers Mk.7 is able to use multiple techniques and combat roles to fulfil the player's preference.

Thanks to the high velocity stock ammunition, the Vickers Mk.7 is able play as a sniper in long range maps. This, with the addition of the laser rangefinder and thermal imaging sights, makes the Vickers Mk.7 a fearful sniper as only certain tanks will be able to pierce your turret past 500 m. Be aware as, despite having a strong hull, always try to get in hulldown position in order to hide the frontal weakspots of your tank (lower frontal plate, turret ring). At longer ranges, enemies will take more time in order to hit and damage the Vickers Mk.7 if hulldown.

As much as crazy it sounds, the Vickers Mk.7 has an impressive speed of 75 km/h even with all the armour. Thanks to this, the Vickers Mk.7 is able to move around and push behind enemy lines and retreat or move to wherever is needed. Thanks to the stabilizer, it is able to fire on the move if needed for a quick "Hit 'n' Run" tactic. It has a slow reload rate (7.8 seconds stock) which can cause issues when engaging targets in a fast manner. Use smoke if needed to retreat and relocate.

After quite a few private tank ventures, and the unsatisfactory development of the Vickers Mark 4, also known as Valiant. The Vickers company brought another design aimed to develop a capable MBT. Either as a replacement for the Challenger Mk.1 then currently in service, or as a valuable modern tank for the exportation. With the support of the Krauss-Maffei company, Vickers matched the up-rated turret of the previous Mark 4 Valiant MBT, with an identical Leopard 2A4 chassis. Thus creating in June 1985, what it became known as Vickers MBT Mark 7.

The Leopards' MTU 838 engine capabilities were well known, and the match with the improved Valiant's Mk 4 turret protected by the powerful Chobham Armour, resulted in an acceptable weight of over 54 tons, providing a top speed of 72 km/h. A speed which was unlikely from most British MBTs of the time - Specially from previous MBTs as the already out phased Chieftains.

Vickers' prototype got fitted with the L11 120 mm gun, the same gun as the contemporary Challenger 1. After these modifications, the Mark 7 went under trials in Egypt, September of the same year. In 1986, using some technologies of the defunct MBT-80 project, the Mark 7 received even greater upgrades: 2nd generation thermal sights with increased resolution, improved stabilization systems for the main gun, reduced thermal and electromagnetic signatures and a new telescopic laser sight. Effectively reworking on the IFCS (Improved Fire Control System) for the 120 mm L11A5 cannon. Equally formidable, the Leopard 2 chassis matched perfectly this gunnery refits; turning the Mark 7 in a very steady tank while firing on the move.

Bittersweet experiences on the CAT 87 (Canadian Army Trophy) with the Army's Challengers 1 pitted against Leopards 2/1 and M1 Abrams, made some interest on the Vickers Mk.7 project. Therefore, in October 1987, a comparison test on the Lulworth Gunnery Ranges was performed between a Challenger 1 and a Vickers Mark 7. CHIP (Challenger/Chieftain Improvement Programme) was looking for projects and new technologies to integrate into the serving Challengers 1. At the firing range, Challenger 1 hit seven out of the 8 targets in an engagement time of approximately 21.7 seconds. While the Vickers Mark 7 achieved successful hits to all 8 targets in only 12.5 seconds. This is likely due to old Chieftain's cannon and gunnery systems being fitted into the newer Challenger 1, with only slightly major gunnery improvements aside from TOGS - unlike the modernized Vickers Universal turret.

This universal turret also made possible not only the installation of an IFCS but the modification for different gun mounts such as the Royal Ordnance's L7 105mm gun. The turret was made in this universal configuration since it was hoped this would suit any potential exportation customers needs, or at least, grow in interest for the British Army. While the army did recount experience in the Vickers Mk 7 and the technologies improvement on gunnery and target requisitioning, in the end, they not procured any contract for it. All the technology research and tests made between the Challenger 1 and the Mk.7 instead lead Vickers and the MOD to develop what was to be known as; the Challenger 2.

Without the interest of the British Army, high productions costs, international political situations and the dependency on a German-made hull, the Vickers Mk.7 did not succeed on the exportation market. Any further research was then halted and the project cancelled, with a single prototype built.

While the fate might seem short-lived, the Vickers Mk.7 proved to be an invaluable leap forward in the modernized MBT development. Not only regarding the CR2 but also because in 1986 the Universal Vickers turret was reproduced to be used by Engesa, on the Brazilian EE-T1 Osório Main Battle Tank