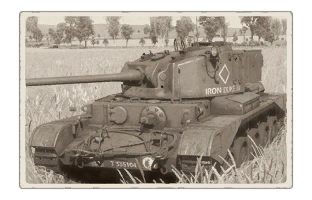 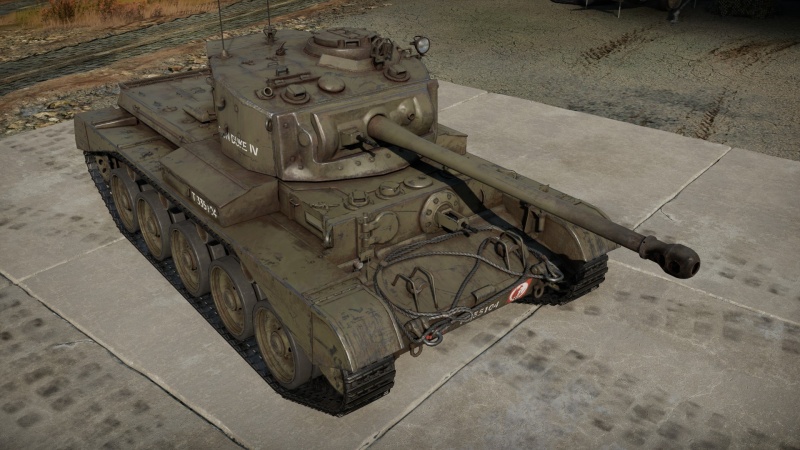 The Tank, Cruiser, Comet I (A34) "Iron Duke IV" is a premium gift rank III British medium tank with a battle rating of 5.0 (AB) and 5.7 (RB/SB). It was introduced during Update 1.57 "Battle March" as a reward for the 2016 WW2 Chronicles event. Armed with a 77 mm HV gun, essentially a 17-pounder with a lower muzzle velocity, it has one of the more powerful guns available for a medium tank at the rating.

The Comet is an excellent medium tank. It has great mobility and acceleration, able to reach 38 km/h very quickly and stay there in full throttle, but its reverse speed is pitiful like the Cromwell's. Firepower is also a benefit of the vehicle, especially after the unlocking of the APDS shot, giving it the penetration needed to deal with any threat you might encounter. The drawback of the design is the sub-par armour that can be pretty easily penetrated at BR 5.3. One should take advantage of the Comet's low profile and mobility to hide and manoeuvre from the enemy to catch them at an advantageous angle. The Comet also has a benefit the previous tanks in its branch, the Sherman Firefly, didn't have in the great gun depression. This allows the Comet to more easily fire over hills in an hull-down position to destroy the enemy with the most the best terrain benefit for protection. 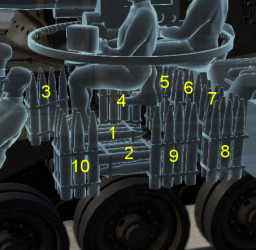 Ammo racks of the Comet I (identical).

Identical to Comet I, this is one of the first tanks for British faction to have X6 scope. It will not get any better than this until rank VI, so get used to it - it will be the same across entire tech tree for a while with SPAA being the only exception.

With newfound APDS ammunition, you might want to take tank on a test drive to get used to APDS ballistic markings. As usually, each mark represents 200 m, but they skip over the 8 number on the scope, leaving inexperienced user guessing where is the 800 m mark. It is the second big line on your scope - try to remember it well.

Fighting a tank of the same weight classification is relatively easy, but difficult against the more armoured Panther and T-34-85 tanks. Until the APDS shot can be unlocked, more decisive shots will have to be made to take care of these tanks, the Mk.6 and Mk.8 shot are the preferred ammunition to use. The Panthers should be targeted on the gun mantlet in the front and should be aimed at the gunner to immobilize their firepower and cause crew damage. The T-34-85 is a bit of a hit-or-miss due to the more heavy sloping nature of the armour and the turret. Penetrating through the front hull armour when it is facing directly at you is the best course of action against the T-34-85. Heavy tanks get even more tricky, but easier once the APDS round is unlocked for use. A Tiger I is admittedly an easy tank to deal with due to the vertical slope of the armour. Problems arise with the IS-2 tank that may show up, due to their heavy armour and their tendency to absolutely destroy vehicles with their 122 mm gun. Distance is not your friend against this tank, the closer the better for your gun to penetrate the weak spots on its frontal armour. A tough situation, but a survivable one.

For every Comet player that does not have the APDS shells, do not engage in long distance gun fights. You are almost certainly going to lose. So use it first as its intention is, a cruiser tank. Cap point and retreat. If you find yourself in a sticky situation, get as close to the enemy as possible and fire at its side. Conduct the battle in this manner until the APDS is unlocked

The best tactic is flanking and "shoot and scoot". Your armour won't stand against T-34s and Tigers you'll meet so don't pick a snipe position and keep firing - sooner or later you will be pinned down. You need to locate a good spot for attack, fire a few shots (Comet has a great fire rate: use it) and relocate. Don't mind the damage you made: keep moving!

Also, another "never" to do with this tank, never go in reverse. You are almost certainly going to get yourself blown up in the process as you have an awful reverse speed of only -1 mph (-3 km/h). If you want to reverse, turn the whole tank around instead using neutral steer or just charge at the enemy, circle him or her once and disappear the other way. You must do this as quickly as you appeared. You can use smoke grenades, but still, don't reverse, charge at the enemy. To not to get in the situation in the first place, choose where you are going to go carefully. You must study the situation quickly and cautiously to not to get yourself destroyed in the process. The key is to run, run and run.

In realistic and simulator, the Comet can become sluggish and isn't as fast as in arcade. A suggestion would be to capture the closest cap point, cap it, and then go into hiding. When you go into hiding, take every well placed shot you can and immediately run away from an encounter. You will mainly be facing Tiger IIs, Tiger Is, and Panthers, T-34-85s, rarely Chi-Tos and Chi-Ris. If you encounter them on a one v. one, always be on the move. Move around the other tank and try to hit it from the side (Panthers, Tiger Is, Chi-Tos, and Chi-Ris). If you encounter a Tiger II, slap it across the cheek with a APDS shell and take shoot it through the side. T-34-85 would be easier. You can easily penetrate the frontal armour of the T-34-85. It is just a matter of reaction time.

All tanks when you do not have APDS shells yet. If you do, it a lot easier. As it has been mention before, when engaging a Tiger II, slap an APDS shell on the right turret cheek to knock out the gunner and finish it off from the side. The hardest tanks to counter are the following:

Although your gun can counter anything within the Comets BR range, you should constantly be aware that one hit from pretty much any gun to the front of the hull will destroy you. In particular, the Soviet 85 mm and German 75/88 mm guns should be taken very seriously. They have plenty of explosive filler. The turret on the Comet has the chance to bounce even the mighty 88 mm gun found on the Tiger I, but only a chance. Your hull won't even protect you from the majority of rank 2 guns, so rank 3 and 4 guns will slice through the Comets armour like butter. Because of this, almost any enemy is dangerous. Even SPAA can be a frontal threat to you. In particular, the Wirbelwind or the Ostwind can cause serious damage at close to medium range. Be particularly cautious late in a match when SPAA are more common.

The British experience against the Germans during World War II showed that there were severe deficiencies with their cruiser tanks. The main cruiser tanks in the British inventory was the Crusader tank, but suffered from a gradually inefficient armament and thin armour. A request was submitted in 1941 to the Nuffield Organization and Leyland Motors Ltd for a heavier cruiser tank that could take on the gradually stronger German tanks, the design was also to use components from the Crusader tanks for economic reasons. This became the A24 Cruiser Tank Mk VII Cavalier tank and the A27L Cruiser tank Mk VII Centaur tank, which are both superseded by the A27M Cruiser Tank Mk VII Cromwell tank. The Cromwell ended up as a decent cruiser tank for the British Army, giving great mobility, reliability, and a decent OQF 75 mm gun (or a 6-pounder gun). However, it still had problems, such as being under-gunned against the more armoured German tanks and suspension problems.

It was determined that the British Army needed a tank that mounted the large 17-pounder gun, which would allow the tank to stand its ground against the German panzers. The first attempt was an upgraded Cromwell in the form of the A30 Challenger, but development and production was slow and the first mass-produced tank with the 17-pounder was the modified Sherman Firefly. While the Firefly was adequate, it was a logistical burden when the Firefly is attached with Cromwell troops, which would require the troop to have maintenance requirements for a Cromwell and a Sherman tank. A more standard tank is needed to fix this, and development started on this with the General Staff specification A34.

The developing tank, now called A34 Comet I, was meant to fix the issues from the Cromwell such as the suspension and the track shedding, plus also increase the firepower and speed. The gun mounted on the tank was the "77 mm HV", a specifically built gun for the Comet I. Though using the same projectiles as the 17-pounder, the 77 mm HV gun uses cartridges with different casings and thus the rounds between the two gun are different and the 77 mm HV produces a lower muzzle velocity for the round, but this allowed easier stowage in the gun due to the more compact size. The Comet I also gave a greater armour protection, a welded armour construction, cast gun mantlet, stronger suspension, a return roller established in the suspension, an electrically traversed turret, and ammo stowage inside armoured bins. The Comet I, though having the power to go faster than the Cromwell, is restricted with an engine governor to preserve the suspension, engine, and tracks. The Comet I entered prototype stage in February 1944, but delays caused production to start at September 1944 and then put into service in Europe at December 1944. By the end of the war, about 1,186 Comet I tanks were made for the British Army.

The first units to receive the Comet I tank was the British 11th Armoured Division, which was delivered in December 1944, and was the only division to be refitted with Comets by the end of the war. The Comet did not perform significantly in the battlefield due to its late arrival, but it was involved in the crossing of the Rhine and the Berlin Victory parade in July 1945. At Europe, the maximum speed of 51 km/h allowed the Comet I to exploit the German highways to travel throughout the entire countryside.

The Comet I saw service after World War II during the Korean War when it started, serving alongside its to-be successor Centurion tank. Though the Centurion was adopted in 1949, the Comet I continued to see service in the British Army until 1958, when it was then decommissioned and sold to foreign countries, which included South Africa, Finland, Ireland, Cuba, and Myanmar. Notable records with the Comet I sales was 41 tanks to Finland, which used them until 1970 and kept them in storage for much longer. In 1959, 4 were sent to Ireland in 1959 and another 4 the following year, the Irish kept them until 1973 before being withdrawn.