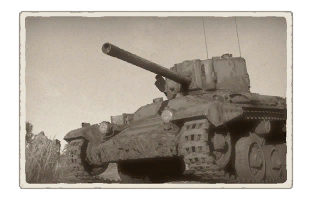 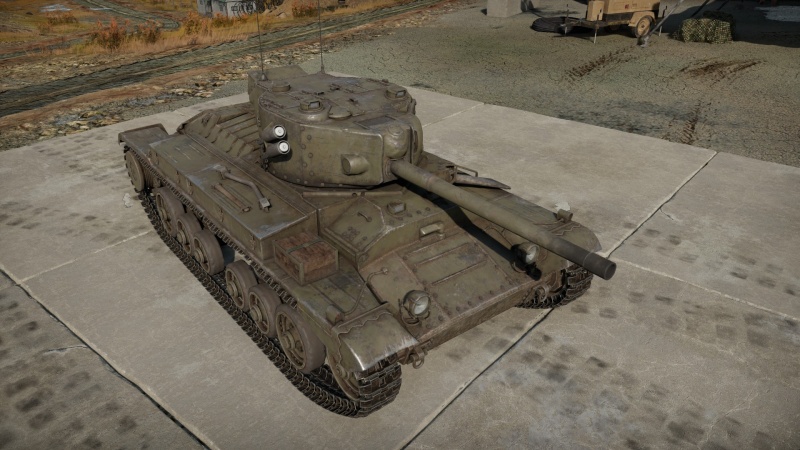 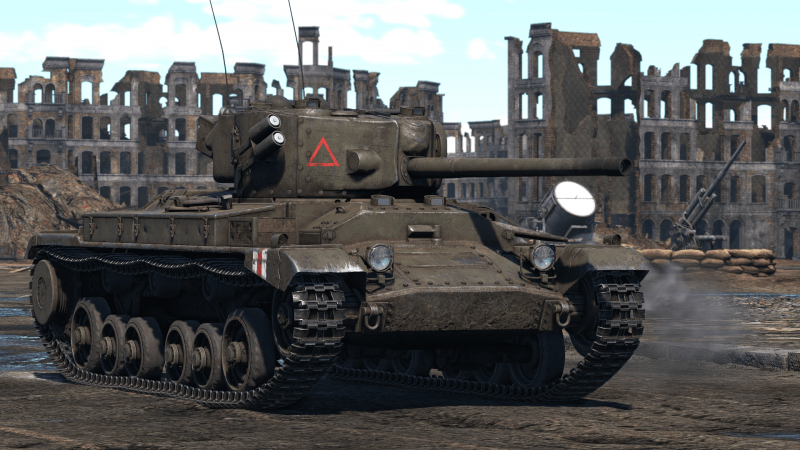 The Tank, Infantry, Valentine IX is a rank II British medium tank with a battle rating of 3.3 (AB) and 3.0 (RB/SB). It was introduced along with the initial British tree line in Update 1.55 "Royal Armour".

At its BR, the Valentine's protection starts to let it down a bit, uptiers can bring guns powerful enough to cut through the Valentine's armour anywhere. Still, the protection is fairly good, especially on the turret cheeks but the hull is somewhat weaker. Mobility is poor. However the Mark. IX sports the formidable 6-pounder gun, which can reliably get through the armour of many vehicles. The Valentine's small profile also allows it to be "sneaky".

Flat on the Valentine's hull is pretty weak, it consists mainly of a flat 60 mm front plate, with an even weaker driver's vision port, so even Rank I guns can punch through there. The sides are 50 mm thick, so angling can be effectively done. The turret is a lot better, featuring both 60 mm turret cheeks sloped forwards, there is still a breach weak spot, where the armour is flat, the sides of the turret are still pretty strong at 60 mm but flat, however turret angling should not be done as it will normalize the cheeks.

As for post-pen survivability it is fairly poor, as there is only three crewmates, a driver in the hull, a gunner and a loader in the turret, so a hull pen will practically always result in a one shot, a turret armour breach might knock out only one of the turret crew, but can one shot as well.

The Valentine gets 2 smoke grenades, but for some reason they launch together and don't create a particularly impressive smoke screen.

Your reverse speed is straight up awful: -2 km/h, not so different than not being able to reverse at all. Thus you must make sure that where you are heading towards is very safe as you will not be able to reverse back to safety quickly. Sometimes turning around at 180° will be faster, if you accelerate a little bit before that you will turn more easily. But turning on the move will bleed a lot of your speed away. The power-to-weight ratio is very low, meaning the Valentine IX will become painfully slow and sluggish on bad roads or slopes. In maps like Frozen Pass or White Rock Fortress, the Valentine IX must choose roads to drive on, or else it will be as slow as ~15 km/h.

The Valentine IX is armed with a 57 mm 6pdr OQF Mk.III cannon. Similar to some previous British tanks, this cannon has a quick reload for its calibre of ~4.5 seconds which allows the player to fire more shots if the first round didn't disable or destroy the target. This gun provides rather flat projectile trajectories which is good for beginners to aim at longer ranges (>600 m).

The gun depression is great, at -12° it will be able to suit most mountainous maps. The turret rotation speed of ~13° is very average: it is fast enough to swivel towards the target if the target is not far away from where the gun is pointing at, but too slow to quickly respond to anything that's far from the gun's direction.

Like the previous Valentine XI, the IX model does not have access to a gun stabiliser so tactics like CQC may not be as smooth as before.

Ammo racks of the Valentine IX

The Valentine IX is an interesting vehicle. The armour can be useful against most enemy cannons if you angle properly, but the mobility is sub par. The 6 pounder gun provides excellent penetration with a fast velocity, not to mention the reload rate and semi stabilization. The best way to play the Valentine IX is to play around cover and play carefully. The benefit of being slow is it gives Valentine commanders time to think before they act. The Valentine will be the last to the fight in most situations, so make sure to pay attention to your allies and enemy positions as they reveal themselves. With careful planning, the Valentine can preform very well. Because it is so slow, it is important to play with your team. Use the map to point out enemy positions and pay attention when your allies do the same. Also be careful not to push too far into enemy territory, your low speed will not let you get out quickly. You cannot rely on smoke cover for retreats either as you only get 2 smoke grenades that are launched together, which is far fewer than most British vehicles. Another weakness to consider with the Valentine IX specifically is the lack of a machine gun. While the MGs on most tanks are not often used, lacking one is still a disadvantage.

While the slow speed can be an advantage in RB, allowing Valentine commanders to play more cautiously, it AB it is a simple disadvantage. However the other qualities of the Valentine allow it to be a somewhat competitive front line medium tank in AB, using its angled armour and firepower to bounce a few shots and easily dispatch most enemy vehicles.

The experiences taken from the development of the A9, A10 cruiser tanks and the A11 infantry tank prompted Vickers-Armstrongs to begin development of a new tank. As a private venture, the design did not receive any designations from the British General Staff during its creation. The designing of the tank focused on the tank having the weight of a cruiser, but with the armour comparable to the infantry tanks. The basis was to have the vehicle with 60 mm of frontal armour and a 2-pounder gun in a two-man turret. To make it as light as possible, it was small and featured a cramped interior. The design used features taken from the A9 and A10 tanks so the design was easier to produce and cheaper to make. Vickers unveiled the design to War Office at February 10, 1938. While they initially viewed it unfavourably for its tiny two-man turret, they took it in April 1939 due to the growing tense situation in Europe with Nazi Germany, with the first order coming in May 1940 after the losses suffered by the British Expeditionary Forces in the Battle of France. The name Valentine was given to the tank sometime between its introduction to War Office and its adoption. The origin of the name is disputed, some say it was due to its introduction on February 14 in 1938 or 1940, other say it was the middle name of Sir John V. Carden, who helped design the Valentine's predecessors. Other sources say it is a name from the Vickers' company full name (Vickers-Armstrong Ltd Elswick & [Newcastle-upon] Tyne), and David Fletcher from Bovington Tank Museum say that "Valentine" was a code name used by the company for its development.

The Valentine mostly saw service in the North African Campaign, where the crew reported on it very favourable as a reliable and well-protected tank. The first unit who saw action with the Valentine was the 8th Royal Tank Regiment in Operation Crusader, where it was in the process of replacing the Matilda III. The reliability is expressed when some Valentines were reported to have travelled a distance of 4,800 kilometers by the time the British reached Tunisia. The Valentine tanks soon saw wide-spread use by mid-1941 when they were issued out widely to armoured regiments due to the lack of cruiser tanks available to fill in the ranks.