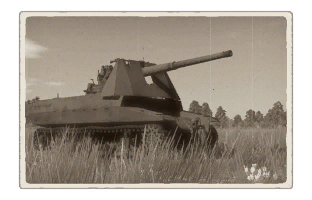 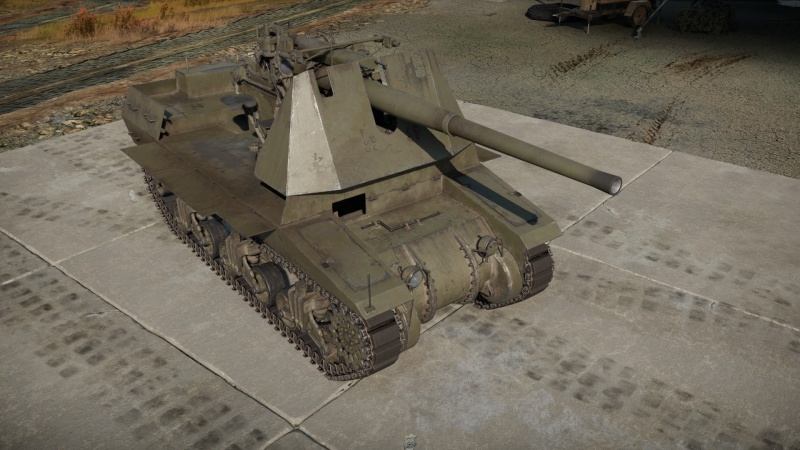 The OQF 3.7-inch AA on Ram Mounting (QF 3.7 Ram) is a gift rank III British tank destroyer with a battle rating of 5.3 (AB/RB/SB). It was introduced during Update 1.95 "Northern Wind" in the Operation F.R.O.S.T. event. It features a heavily modified Ram chassis with a powerful 94 mm AA cannon. Serving as a British counterpart of the German VFW; the two can lethally face each other in the battlefield.

A highly mobile platform; with a hard-hitting gun, good crew count, great reload rate, and all the intentions to dispatch enemy armour. What else could a veteran British tank commander ask for!

The QF 3.7 Ram possesses light armour in the upper area of the turret (19.5 mm thickness), that might only cover your crew for small-calibre machine guns.

Lying hidden in the back of the turret, it's heavy 94 mm cannon is protected by 20 mm of structural steel located lower the cannon gun. Inside it the vertical aim drive is located. If a shot goes through and detonates inside this boxy structure, it will cause damage to your crew and the vertical aiming drive. This is the most common damage the QF 3.7 Ram will get, as the enemy often shoots at the area below the 94 mm cannon. 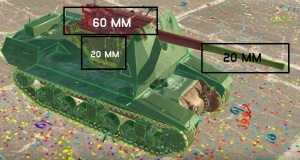 The driver and a machine gunner remain in the safest spot within the vehicle chassis. The gunner it well placed but often gets knocked out. High crew skills are a must to ensure a higher chance of resisting explosive effects or shrapnel while performing gun reloads and field repairs even faster to fight back against the opponents.

Mobility is decent for a self-propelled gun with such a gun, thanks to its light armour. 43 km/h in AB, 40 km/h in RB/SB.

The QF 3.7 Ram is able to reach its maximum speed of 40 km/h (RB) in off-road terrain quite easily. Not enough to do a flanking manoeuvre, but enough to get a good sniping location or position early in the match. Its reverse speed is quite poor, 5.7 km/h in AB and 5.2 km/h in RB/SB. However, this is enough for retreating from a sniping position effectively. Close quarters should be avoided as it would just make the QF 3.7 Ram quickly spotted and flanked by enemy forces.

Mobility represents an important part of the playstyle. It will allow to multiply the horizontal targeting speed and often saving the tank from destruction. Commanders should keep this in mind when targeting a close threat. If possible, turn the hull with the gun. This will not only increase the possibilities of shooting first but also allows to cover the crew with the frontal armour. In case the enemy achieves a fire solution first he might shoot in the wrong spot and the QF 3.7 Ram can return fire.

The 94 mm OQF Mk.II cannon provides very lethal penetration for all the enemy it faces. It's different from any other cannon in the British tree until battle rating 5.0, as this cannon holds a lower muzzle velocity than your usual 17-pdr gun. Therefore some practice should be made to familiarize with the new cannon ballistics. The reload rate is astoundingly good (Similar to the amazing Avenger). Often groups of enemies will underestimate the QF 3.7 Ram, just to face its already reloaded gun. This quick reload is highly useful on close city maps and then during long-distance sniping duels.

Beware, due to the high calibre of the shell, volumetric corrections should be considered before shooting. The wrong calculations could lead to the shell impacting the gun barrel or any protruding object which is not the targeted armour plate. Jeopardizing the whole vehicle integrity with a single failed shot!

The more useful shot undoubtedly is the APCBC Shot Mk.1. The HE shell might not be needed for the majority of the encounters. Since the QF 3.7 Ram relies on frontal or flank engagements, none in which the HE can be applied effectively. The HE shell is somewhat useful for uncommon light vehicles or if any tank commander endeavours into anti-aircraft duties. (not an easy task since it requires direct hits to high-speed moving aircraft, with a slow vertical turret rotation) 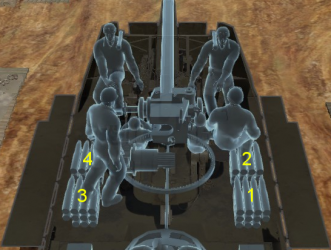 In Realistic/Simulator battles, one of the best approaches is the sniping role as the 44 shells available are sufficient for prolonged sniper duties. Quickly find an appropriate spot at the beginning of the match. The vehicle is tall and the gun depression is only of -5° so keep that in mind when positioning. Covering the allies flanks, long roads, taking down enemy snipers, or keeping the enemy from capturing a point shall be your duty. This tactic can be more successful with camouflage on the frontal armour. Concealing the QF Ram in the woods as well as hiding the exposed loaders in the back from easy picking.

A good tactic is to wait enemies expose their sides, Tiger and Panther tanks don't have the armour to resist the hit of the 94 mm cannon, so one-shot will usually be enough (lethal spalling effect). The same can be said of Soviet vehicles, but often their frontal/side armour tends to ricochet rounds (due to slopeness), it's recommended to aim at the low side for soviet heavy tanks. As enemies pass by, wait for the right moment to shoot, but make sure to correctly range the targets and lead the gun to land the first shot.

Shooting the enemies frontal armour is possible but the risk of shots bouncing off is still high, despite the gun's penetration capabilities. This will also expose Ram's position, which will lead enemies to pour down machine-gun fire, artillery, and aerial strikes to suppress and eliminate the QF 3.7 Ram. Engaging the enemy's frontal armour should be actively executed on close-distance maps. There the gun penetration remains extremely high, and the damage will be significant.

Aircraft are an extraordinary threat of the QF Ram due to their machine-guns and cannons which can easily destroy it in seconds. It is best to when possible request allied anti-aircraft protection and attempt to conceal the vehicle from aircraft as staying out in the open significantly shortens the vehicle's lifespan.

This Brawling playstyle represents all or nothing with the QF Ram. The commanders will need to perform linear ambush tactics and wait by corners; this will lead to an enfilading fire where the quick reloading gun must be used. The Ram needs to always be on the move and ready to reposition once actions are ceased. It won't take long since short-ranged artillery strikes or "revenge planes" start coming. The tank commanders must find a good operational zone that enables the QF Ram to defend and support the team's frontal offensive. The team provides the armour, the QF Ram provides the gun.

Once this operational zone is chosen, the Ram should creep around always near or undercover. Use the loud engine sounds to anticipate a threat. Staying close or behind allies also helps to survive during these encounters. A good operational zone for the Ram is over flat terrain; due to the gun's poor depression. Staying behind destroyed tanks, rocks, bushes, or trees as multidirectional cover. Also solid tall covers to masks your shots against enemy aircraft; because of this, some enclosed or semi-urban spaces are valuable. If possible, draw some distance from the targets. Linear engagements where the Ram can shoot first are adequate, especially on long continuous streets or city accesses.

Multidirectional open spaces (city crossroads or map centres) are the tomb of the Ram. The crew can receive machine-gun fire from any angle and likely, the enemy will out-flank the QF 3.7 Ram. The turret targeting speed is decent but not even close to medium tanks or light tanks typically eager to flank the QF Ram.

Arcade battles are ill-advised for this vehicle's survival. The ability of the enemy to locate the highly vulnerable QF Ram means danger. Often planes and artillery will be enough to destroy it; this becomes evident on open-field maps. Tanks become a harder target to hit and you lose the tactical advantage of stealth. The recommended maps for the QF Ram on arcade are the smallest city maps or very distant maps with a confident solid cover. Beware of enemy artillery and planes!

In 1941, General Frederick 'Frank' Worthington, founder of the Canadian Armoured Corps, proposed that a 3.7-inch anti-aircraft gun be mounted on a Ram chassis to act as a mobile anti-tank gun. The higher firepower was needed to counter the German heavy armour on the North African campaign and to provide heavy defensive fire. The Ordnance Quick Firing (OQF) MK II was the primary British heavy AA guns during World War II. The Canadians used these guns for experimenting, mounting it on the Ram chassis.

Few examples were made and one was sent to Great Britain for trials, but no further development came of it.

Other Canadian tanks present in the game:

Other Canadian vehicles present in the game: