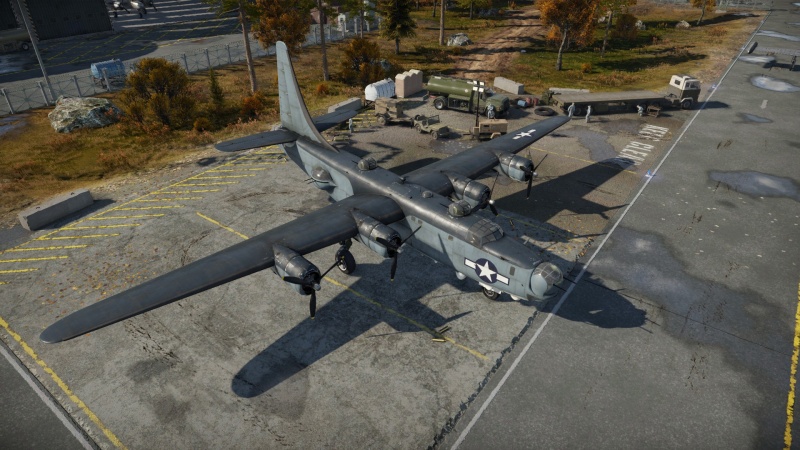 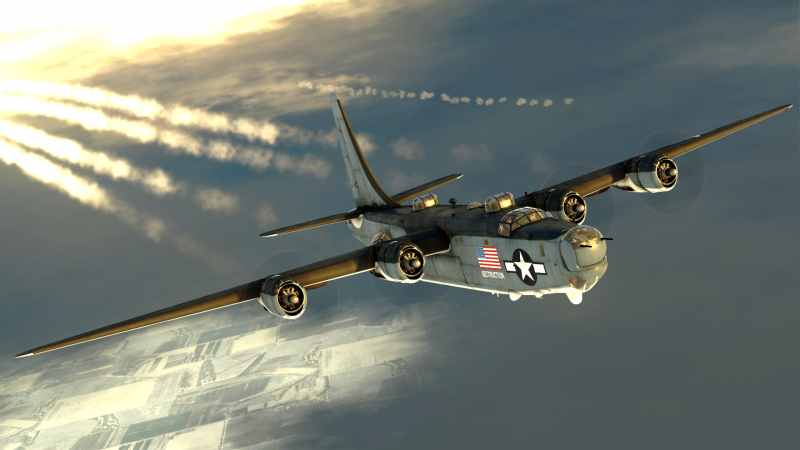 Historically a maritime patrol/reconnaissance aircraft derived from the B-24 Liberator, the Privateer performs the function of a heavy bomber, optimized for dumping large amounts of high explosive on enemy bases.

Since it is a heavy four-engine maritime bomber, the Privateer's manoeuvrability is unsurprisingly poor, it is also agonizingly slow, at nearly 100 km/h slower than the B-17E Flying Fortress (only 404 km/h top level speed). Its maximum speed in a dive is 580 km/h, and it has absolutely no chance of evading any of the fighters it might face using its speed or diving away. As a maritime patrol aircraft, the engines are optimized for low-level performance, thus its performance will suffer noticeably above 6,000 m while it can retain its energy gained form a dive reasonably well at below 3,000 m.

The PB4Y-2 can be outfitted with the following ordnance:

When stock, the Privateer is loaded with 20 x 100 lb AN-M30A1 bombs, which are near useless at anything other than picking off light stationary targets. Fortunately, the Privateer gets its best payload option once you've researched the "Mk 13 Mod 0" modification at rank II: 8 x Type A Mark I naval mines, with 508 kg of TNT equivalent each (compared to 4 x 2,000 lb AN-M66A2 bombs). This is the most potent payload for any American bomber until the B-29 Superfortress. These will do more damage to a base than the equivalent weight in 2,000 lb bombs that the B-17 Flying Fortress or B-24 Liberator can carry. Against ground targets, the Type A naval mine will work like an ordinary bomb (will explode upon ground contact after the fuse timer is up). Due to quantity of bombs and explosives, the Privateer can be used to either destroy the base or destroy a column of heavy vehicles.

Against naval targets, however, the naval mines will not explode when missed but instead armed itself underwater and wait for enemy contact. This reduces the overall effectiveness against stationary naval targets (as it requires a direct hit to trigger a detonation) but provides an additional use in naval battles, as you can lay these mines on various choke points and capture zones, as well as trapping any moving enemy vessel that comes too close to it.

The PB4Y-2 features a large amount of .50 cal heavy machine guns as defensive armament. However, even when all of them can be brought to bear, it may not be sufficient to protect the bomber against determined or skilled fighter opposition. Only the tail turret can engage enemies attacking directly behind the Privateer, as the vertical stabilizer blocks the dorsal turrets (gunner dead-zone).

The Consolidated PB4Y-2 Privateer was a heavy bomber & maritime patrol aircraft used by the United States Navy developed from the PB4Y-1, a minor modification of the B-24 Liberator used by the United States during WWII. The aircraft was a fully-navalized version of the B-24 featuring a taller single vertical stabilizer, a flight engineer's station and modified armament. The aircraft were used towards the end of the Second World War, and were used after the war as patrol aircraft by various countries. Some converted Privateers served as firefighters into the early 2000s; all aircraft are now retired from service, though two airframes are still fully airworthy.

The PB4Y-2 Privateer was a heavy modification on the previous PB4Y-1, which had been developed from the B-24 Liberator for the United States Navy and featured only minor changes from its air force cousin. The navy had been seeking a fully-navalized version of the B-24, and as a result, the aircraft featured numerous improvements over the previous PB4Y-1. The aircraft was similar in appearance to the B-24 but featured several defining features: first, the aircraft had a single vertical stabilizer compared to two smaller stabilizers on the B-24. The aircraft also had a longer fuselage accommodating a flight engineer's station, and a rebuilt armament suite consisting of twelve .50 caliber machine guns in two beam & dorsal turrets and one fore & aft turret. The ventral "ball" turret of the B-24 was removed, considering that the PB4Y was designed for low-altitude operations; the engine's superchargers were also removed for this purpose.

The Navy would eventually acquire 739 PB4Y-2 Privateers, though most of these aircraft arrived after the end of the war. The few aircraft that did serve during WWII provided maritime patrol and bombing capabilities. Notably, the aircraft dropped the ASM-N-2 Bat guided-bomb, similar to the German Fritz-X guided weapon, and was used with some success against Japanese vessels. For example, the Japanese coastal defence ship Aguni was damaged from a distance of 37 km by a Bat guided bomb dropped from a PB4Y Privateer. Effectively, the Bat was the first guided missile in United States service.

Following the end of the Second World War, the remaining PB4Ys were used as maritime patrol aircraft, patrol bombers and even hurricane hunters (several aircraft were lost in this role). The aircraft was used once again during the Korean War as a patrol bomber, and sold to both France and the Republic of China. All American PB4Ys were retired by 1954; small numbers of these aircraft were used as firefighting aircraft all the way until 2002, when a converted PB4Y disintegrated in mid-air while firefighting; as a result, the last of the firefighting PB4Ys were retired as well. Eight PB4Y-2 Privateers survive to this day, mostly in museums in the United States. Two aircraft are fully airworthy and a third is under restoration to become fully airworthy.