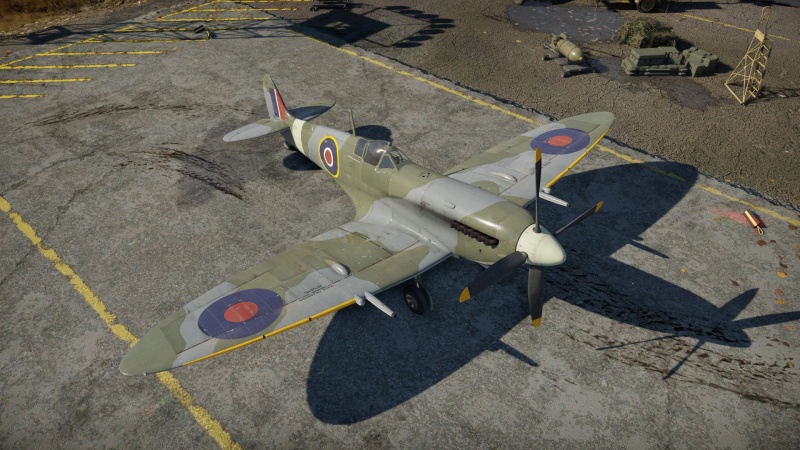 As a Spitfire Mk IX at its realistic mode battle rating, the most common and dangerous opponents are Bf 109's, normally the G2/Trop and F4 variants both of which often benefit from a better team composition on the axis side. When facing them, you should never attempt to hold an extended dogfight above 5,000 m as you will lose a significant portion of engine power in comparison to them. Instead, you should take the fight below 5 km where you can outrun a Bf 109 F4, although Fw 190's and the German variant P-47 will catch up easily at the lower altitude.

The advantages of your plane in both an up-tier and down-tier remain largely the same in that you can out-turn almost anything except all models of the A6M 'Zero' and the A7M 'Reppu' along with earlier Spitfires you might face such as the Italian Spitfire Mk Vb/Trop. In this scenario you should play cautiously and try to energy fight them, extending away and climbing. For head-ons, since the armament of 2 x 20 mm and 4 x 7.7 mm machine guns are rather lacklustre, you usually should avoid these. If you really want to, though, use stealth rounds and fire from 1,000-1,400 metres away from the target while using a 500 m convergence. However, this Spitfire does best at mid-close ranges (200-600 metres) with either 400 m or 300 m convergence. The wing-mounted guns aren't really good for head-ons.

Another aspect to consider and adjust your playstyle to is that while the acceleration and turn time is good, engine overheating in RB and SB should be managed using manual engine controls and pulling more than 9G's while rolling puts you at risk of ripping your wing off. Additionally, since the Inline engine is very vulnerable to damage and the Spitfire requires lots of time on target, practice proper methods of attacking bombers using boom and zoom tactics as tail-sitting enemy bombers with decent defensive armaments like the Me 264 and the He 177 is not likely to end well at all.

The Supermarine Spitfire was a British single-engine, all-metal, low-wing monoplane fighter. While the Mk VII and Mk VIII variants was being designed, a Spitfire Mk III was tested in September 1941 with the new Rolls Royce 60 in the hopes of developing an interim fighter to use as a stop gap measure. The new Spitfire performed exceptionally well, and was rushed into production as the Mk IX. The Air Fighting Development Unit described the Mk IX as 'outstandingly better than the Mk V especially at heights above 20,000 feet' and even though it was not fitted with the modified control surfaces under development for the Mk VII and Mk VIII, the Mk IX was more than capable of meeting the Focke-Wulf FW190 on favourable terms. The Mk IX was fitted with the Type C 'universal' wing and originally carried the tried and tested combination of two 20mm cannon and four 0.303 inch machine guns, but in later versions the four 0.303 machine guns were replaced with two .50 calibre guns.