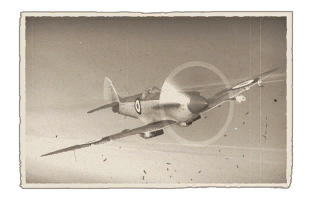 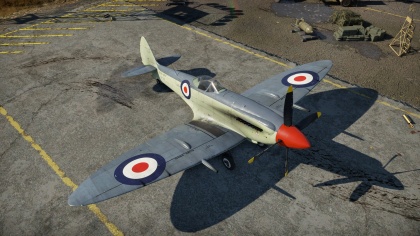 Stock, the plane is very difficult to handle, the climb rate is horrible (17 m/s in AB, 19.5 m/s in RB/SB), energy retention is lacking, weaponry is inefficient, speed is terrible (603 km/h max speed in AB, 586 km/h max speed in AB/SB)... Players will have a bitter time unlocking each and every module of the plane and should stick to a boom and zoom strategy until the performance modules are fully unlocked and installed. 20 mm ammo belts should be researched as soon as it is available to research, but focusing on the performance is the key, 7.7 mm and bombs should be left as the last modules to unlock. Stock, the plane is NOT worth playing in RB, play it in AB until you have at least unlocked all the performance modules.

The 2 x Hispano Mk.V 20 mm guns are devastating once the air belt equipped, composed of 50% HEF-I and 50 HEF-SAPI (HEF-I HEF-I HEF-SAPI HEF-SAPI) it wrecks others fighters in small bursts and does not require much more for medium bombers if used at a convergence point. On the other hand the 7.7 mm appears like an archaic weapon, ineffective but kept as a souvenir of the "good old days" of the Spitfire Mk Ia. Ineffective, yes but not useless actually, the 7.7 mm with tracer can be used as visual guide to see where you are firing with the 20 mm air belt which does not contain tracers! Quite a useful tip in RB for inexperienced players.

The Seafire F Mk XVII is a fighter that does best at low altitudes. Here, below 2500 m, it climbs exceptionally well, and its engine has a great power output, but as soon as the plane passes that altitude, engine power begins to fall significantly. The best performance is had below 2000 m of altitude, and above 3500 m, engine performance is very much inadequate. Because of this, it is wise to pick and choose which engagements to commit to. It is often unwise to attack heavy bombers, both because the Seafire's armament can be lacking against such large enemies and because heavy bombers are usually found at high altitudes, where the Seafire's performance is greatly hampered. Instead, low-altitude dogfights are where the Seafire shines. It can also be used to defend ground units against enemy ground-attackers.

The Seafire is able to carry up to 1000 lbs of bombs, which can be used in either Air Realistic battles to destroy armoured ground targets, or in Ground Realistic battles, where they can be used for ground-attack to great effect. And once the bombs have been dropped, the Seafire can act as a great air superiority fighter in mixed battles. Additionally, it can use its 7.7 mm machine guns to spot ground targets for teammates on the ground to destroy. By late 1944 the Seafire had already seen a number of major components changes, modifications and variations. The previous Seafire, the Mk.XV, came immediately after the Mk.III and was named thus in an attempt to standardize with the Spitfire lineage. Westland had taken a Seafire Mk.XV and, after some trial and error with various canopies, followed the progression of the Spitfire family and fitted a high visibility teardrop canopy along with a modified rear fuselage. The last 30 Seafire Mk.XVs therefore acted as an interim transition marque into the new Seafire Mk.XVII.

The Mk.XVII also included a number of further modifications – perhaps most importantly, the undercarriage was significantly improved for carrier operations. Previous Seafires had been forced to persevere with what was effectively a Spitfire undercarriage, designed for operating from grass strips with an aircraft some three quarters of a ton lighter. The new undercarriage was strengthened for the heavier Seafire and also made longer; not only did this new deck clearance make landing safer and easier, it also permitted greater operating weights which allowed the Seafire Mk.XVII to carry more fuel and ordnance.

The cut down, lighter rear fuselage also allowed an additional internal fuel tank, or reconnaissance cameras. The overall strengthening of the airframe allowed installation of further hard points, and the Seafire Mk.XVII could now carry double the number of rockets and bombs, with a 250 lb bomb now being carried under each wing in addition to the centerline 500 lb bomb. Air to air weaponry remained the same as previous Seafires, with two 20mm Hispano Mk.V cannon and four 0.303 Browning machine guns. An enlarged tail fin also led to increased stability and improved handling characteristics.

The same Rolls-Royce Griffon VI that powered the previous Seafire Mk.XV was also used in the Mk.XVII. This was a single-stage, two-speed supercharger engine which gave 1815 hp at 4500 feet with +15 lbs of boost. The Seafire Mk.XVII reached its top speed of 383 mph at 23,000 feet – slightly quicker than the Mk.XV at all heights, but the rate of climb was slightly less impressive.

807 Naval Air Squadron was the first squadron to receive the new Seafire Mk.XVII in December 1945 after returning to Britain from the Far East. With a total of 232 fighters equipping five front line squadrons and a number of reserve, training and second line squadrons, the Seafire Mk.XVII was finally retired in late 1954.