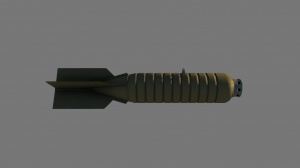 The 10 kg SD10C was a German anti-personnel bomb, mainly used as a sub-munition in cluster bombs.

The grooves seen on the bomb's body ensured good fragmentation, similar to the Mk 2 "pineapple" hand grenade of the US.

This bomb has an explosive power comparable to that of a 3 inch/76mm HE shell. Barely enough to destroy anything, even armoured cars and open vehicles, in which case multiple SD10C bombs are needed.

Because of the extremely small weight of the bomb, it is only effective against extremely lightly armoured targets, such as the GAZ-AAA (4M), or the 15cm sIG 33 B Sfl.