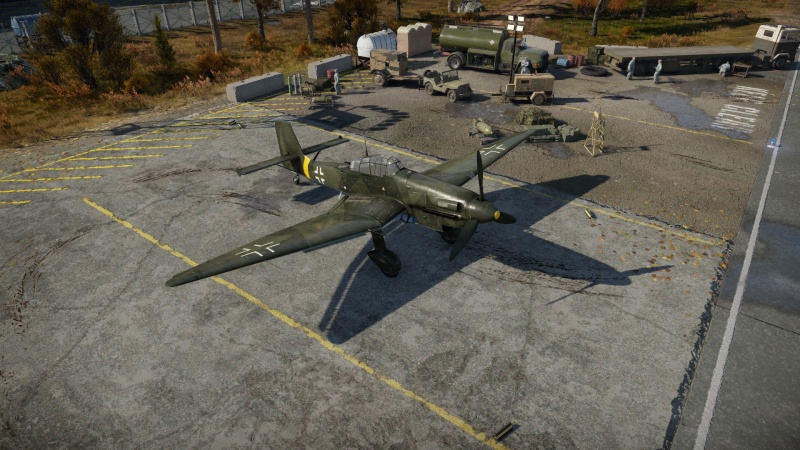 The last in the in-game series of dive-bombing Ju 87 aircraft, the Ju 87 D-5 shows the transition between the Ju 87's original dive-bombing role to cannon ground-attack. With its wing guns switched out to 20 mm cannon armaments, as well as a diverse suspended armament options, the Ju 87 D-5 can allow players to choose different ways to attack ground targets when in a match.

The Ju 87 D-5 is not as fast as most, if not all the fighters at its battle rating, but it is surprisingly manoeuvrable at low speeds compared to them.

Since this plane typically gets an air start in RB at around 3,500 m, gaining altitude is generally not a major problem at the beginning of matches on this plane. Be careful though, as if the D-5 reaches speed of anything above 450 km/h, it will start to get extreme lock-ups in the horizontal axis and slightly less in the vertical. However, staying around the 300 km/h can have the D-5 be able to out-manoeuvre opponents.

The stock 20 mm cannons are not very effective with the aircraft's role or aerodynamics.

Players who often play earlier Ju 87's probably did their best to not engage enemies, as they were only equipped with two 7.92 mm machine guns to fight alongside the rear gunner's machine guns. However, with this Ju 87 comes new and improved armament of 20 mm cannons. As a result, this opens up a whole new world as a fighter.

If battling fighters, try to head on them as the Ju 87 is a relatively tough plane, and with the gun pods attached any pilot foolish enough to head on you will most likely end up as mincemeat. If they don't do so, try to bleed their energy and speed, and then swoop in for the kill.

The Ju 87 D-5 can be outfitted with the following ordnance:

The suspended 12 x 7.92 mm deals with enemy aircraft pretty well, though runs out of ammo quickly. It is most suited for beginners since the tracers are more visible. The suspended 4 x 20 mm cannons are good at downing bombers and fighters but they impact negatively the flight performance of the D-5 considerably more than the 12 x 7.92 mm gunpods.

The turret 7.92 mm machine gun is somewhat useful in distracting enemies but does not deal a lot of damage.

Ju 87 D series are mainly adapted for ground attack roles. The D-5 variant has two 20 mm MG 151 cannons which are suitable for attacking light-medium tanks. In addition in the research tree, you can get additional WB 151 (4 x MG 151 cannons) or the WB 81B (12 x MG 81 machine guns) gun pods.

If you decide to play the role of a fighter instead of the historic role of the attacker, it is recommended that you climb to around 5,500 m, which you should easily be able to do before reaching your enemies at the halfway point. As noted in the flight performance, staying at speeds greater than 400 km/h can lock up the control surfaces, meaning dogfighting at high speed is not in the plane's favour. Get the enemy to bleed speed to the more favourable 300 km/h-range, at which you will be able to outturn them.

With the additional 20 mm cannons in the suspended armaments, the Ju 87 D-5 becomes a worthy opponent in head-ons. With this loadout, one should make sure not to be caught at less than 350 km/h. At speeds higher than this, the D-5 can still manage to do a quick turn around to lay the guns on a target from nearly every angle. The gun pods damage the roll rate quite significantly, so heavy use of the rudder is recommended. Pilots more experienced with aiming MG 151s might benefit from using stealth belts, as they make enemies less likely to take evasive action, consequently saving precious speed as you no longer have to manoeuvre to stay on target.

Because of their low speed, non-retractable landing gear and reasonable durability, all the Ju 87 series are quite good for capturing airfields in the Airfield Domination mode.

Yak-2 KABB - Do not think that the Ju 87 D-5 can confidently outmanoeuvre this plane just because it is twin-engined. The Yak-2 has an amazing turn rate for a heavy fighter, thus the Ju 87 D-5 must avoid turning with it, if not dogfighting with it in general. It bears a pair of ShVAK cannons that can easily damage vital parts like engine or cooling systems. It has green camouflage, greatly resembling an Me 410 but with an H-tail like a Bf 110's.

ZSD63 - A dangerous SPAA to go up against in Tank Realistic Battles. Though it is hard to identify specific SPAA vehicles on the ground (especially when they are shooting tracers at the plane), if a ZSD63 is identified, avoid it at all costs and do not attempt head-ons with it, ever. It can easily snap a wing off by casually putting a short burst in the Ju 87 D-5's flight path. Don't even get close to it unless it is busy shooting someone else or if the Ju 87 D-5 has a bomb ready for use. The numerous MGs / cannons on the Ju 87 D-5 cannot effectively damage it as its hull is overall quite empty, causing your shells to do little to no damage. Some identifying features of the ZSD63 is its rather boxy and tall hull with a geometric turret sitting at the back, slightly similar to a Wirbelwind's. The firing manner is also distinctive: the sound and green tracers are very rapid, much like a buzz saw, but then it will remain silent for half a minute reloading. Note that an experienced ZSD player will hold its fire or shoot in single salvoes with long halts between, making it look like that it's reloading.