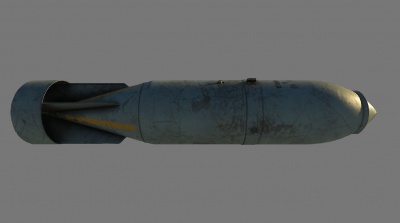 The 1,800 kg SC1800B is a German air-dropped bomb found on large German bombers.

The SC1800B is best used against bases in air RB. In air RB, there are 2 different kinds of base HP standard and double HP. The SC1800B can destroy a standard HP base by itself while you'll need 2 x 1,800 kg bombs to destroy the double HP base. These bombs can also be useful in mixed ground battles, as they will knock out any vehicle within a 10-20 m radius with their large explosive mass. Beware of friendly fire incidents however.