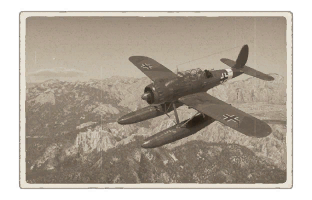 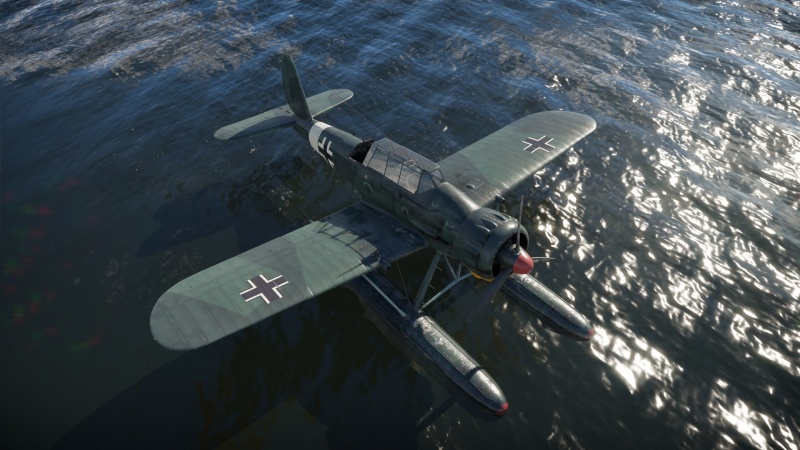 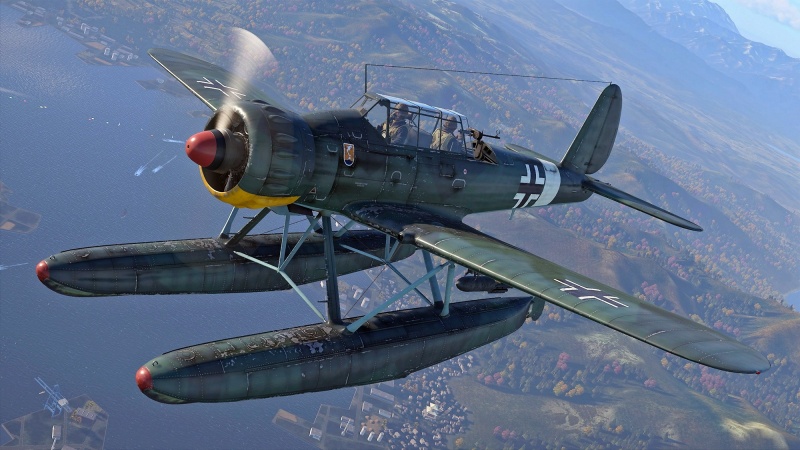 The Ar 196 A-3 is a premium gift rank I German bomber with a battle rating of 1.7 (AB/SB) and 1.3 (RB). It was introduced during Update "Starfighters" as a reward for the 2020 Operation S.U.M.M.E.R. event. Since the Update "Winged Lions", the Ar 196 A-3 is available as a ship-launched reconnaissance aircraft.

The German Ar 196 A-3 hydroplane, one of the best naval scouts in history, nicknamed "the eyes of the Kriegsmarine"! The Ar 196 A-3 has every chance of becoming the new king of the sandpit: it is armed with a pair of 20 mm MG FF cannons and an MG 17 rifle-calibre machine gun, it can also carry 2 x 50 kg bombs under its wings. The Ar 196 A-3 also has a defensive turret with a 7.92 mm machine gun, which is quite good in the initial ranks. And of course, just like the other hydroplanes in the game, the Ar 196 A-3 is able to capture control points in naval battles. [1]

For different roles, different belts should be used. For air battles, Air Targets should be loaded, because it contains the most HE rounds. The 7.92 mm can be loaded with Universal or Stealth. However, if your aim is less than stellar, Tracers will help you aim. In naval, however, Stealth should be loaded for the MG FFs. Contrary their name, Stealth belts are actually not at all stealthy as every round fired can be seen. They can be used instead for attacking ships, and hitting components. The 7.92 mm can be loaded with Tracers or Universal.

The Ar 196 A-3 can be outfitted with the following ordnance:

The Arado Ar 196 excels at destroying light ground targets, and with its twin MG FF armament it can head-on virtually any aircraft at the BR and win. Compound that with the fact that there are many inexperienced players at the BR who will head-on any target they meet, and it will be easy to accrue kills. However, the 196 loses energy very easily due to the 2 massive floats strapped to the bottom of the fuselage. The 196 usually goes out in a "blaze of glory" early on into the match, due to the playstyle revolving around killing ground targets. 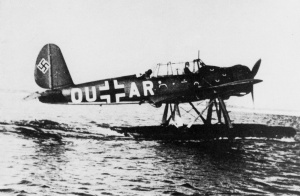 The Ar 196 was a German shipborne floatplane reconnaissance aircraft that equipped the majority of the Kriegsmarine's ships during the Second World War. Designed as a replacement to the obsolete He 60, the Ar 196 started entering service in the late 1930s to equip German capital ships such as ships of the Deutschland, Scharnhorst and Bismarck classes. The planes saw their first service in late 1939 as scouts for the pocket battleship Graf Spee, and later distinguished themselves by capturing the British submarine HMS Seal. Many Ar 196 floatplanes were captured by Allied forces, and several aircraft survive in museums to this day.[2]

In the early 1930s, the primary German floatplane fighter was the Heinkel He 60, an underpowered biplane design that soon became obsolete. Thus, the Air Ministry (RLM) decided to pursue the development of a new naval floatplane fighter. Heinkel submitted the He 114, a sesquiplane, while several other firms submitted similar biplanes designs. However, the Arado firm decided to create an unconventional monoplane design, which proved to have significantly better performance than its competitors.[2] Thus, four prototypes were ordered; more conservative elements of the RLM decided to order the Focke-Wulf designed Fw 62, a more conventional biplane, but the order was cancelled when the Ar 196 proved to be well adapted for its role.[2]

The Ar 196 was of monoplane construction, and featured a BMW engine producing just under 1,000 hp. It was flown by a crew of two - a pilot and a navigator, who doubled as the rear gunner. Armament consisted of a formidable two 20 mm MG/FF cannons and a single 7.92 mm machine gun firing forward, and a single 7.92 mm machine gun on a flexible mounting in the rear cockpit. The first pre-production Ar 196 model was delivered in late 1938, and following shakedown tests, the first production aircraft were delivered in June of 1939.[2]

The Ar 196 first saw battle service in late 1939, when two Ar 196s were loaded aboard the pocket battleship Graf Spee. They served as the medium range reconnaissance aircraft and were responsible for locating the majority of the Spee's victims. Another notable action took place in mid-1940, when land-based Arado 196s captured a British submarine, the HMS Seal.[2] After the Seal struck one of its own mines during a minelaying operation, patrolling Ar 196s managed to damage the submarine by bombs and gunfire to prevent her from submerging. An Arado landed beside the submarine, whose commander decided to surrender.[2]

Production of the Ar 196 was slow, having been shifted between multiple aircraft producers. Nevertheless, the Ar 196 served as the main catapult floatplane for Kriegsmarine capital ships until the end of the war. Production had been terminated in 1944 due to the relative obsolescence of the Ar 196 against the modern allied fighters it frequently encountered over the German coast.[2] Several Ar 196s survived the war, including two floatplanes confiscated with the German heavy cruiser Prinz Eugen. Two Ar 196s survive, one at a Bulgarian museum and the other in storage at the National Air and Space Museum in the United States.[2]