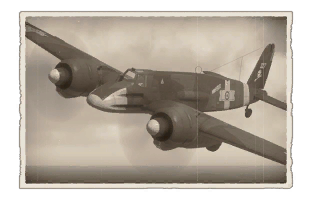 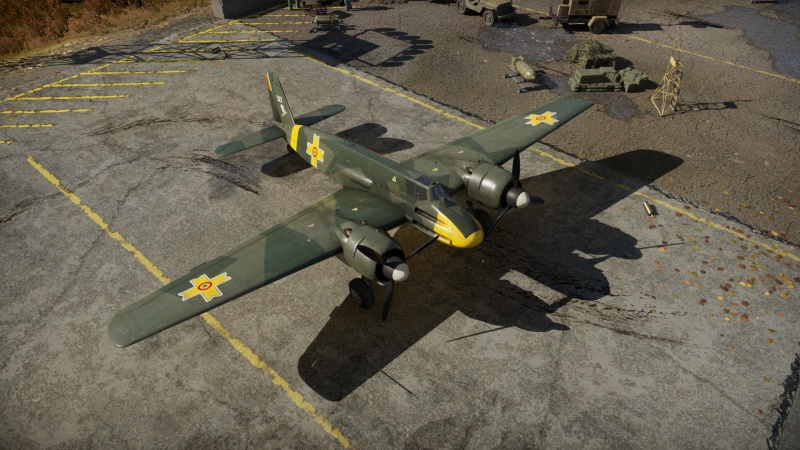 The Hs 129 B-2 (Romanian Air Force) is a premium rank III Italian strike aircraft with a battle rating of 3.3 (AB) and 2.7 (RB/SB). It was introduced as a premium pack vehicle in Update 1.83 "Masters of the Sea" for War Thunder's 6th Anniversary as a replacement for the German Tech Tree version of the vehicle..

The Hs 129's flight characteristic is somewhat similar to the Soviet IL-2 ground attack aircraft. The plane suffers from an underpowered engines which limits its acceleration and climb rate, but the Hs 129 can fly pretty well with enough speed, and has the ability to perform hard manoeuvres in flight even at low altitude. However, the plane cannot roll at all due to the engines lack output to prevent the plane from stalling, as well as bleeds a lot of energy away in any air-to-air engagements.

The Hs 129 B-2 (Romania) (Italy) can be outfitted with the following ordnance:

Yak-2 KABB - Do not think that the Hs 129 B-2 can confidently outmanoeuvre this plane just because it is twin-engined. The Yak-2 has an amazing turn rate for a heavy fighter, thus the Hs 129 B-2 must avoid turning with it, if not dogfighting with it in general. It bears a pair of ShVAK cannons that can easily damage vital parts like engine or cooling systems. It has green camo, greatly resembling an Me 410 but with an H-tail like a Bf 110's.

ZSD63 - A deadly enemy to face in Tank Realistic Battles. Though it is hard to identify specific SPAA vehicles on the ground (especially when they are shooting tracers at the plane), if a ZSD63 is identified, avoid it at all costs and do not attempt head-ons with it, ever. It can easily snap a wing off by causally putting a short burst in the Hs 129 B-2's flight path. Don't even get close to it unless it is occupied with another friendly or if the Hs 129 B-2 is equipped with a bomb that it can use. The Hs 129 B-2's 30 mm / 37 mm cannons in the secondary armaments cannot effectively damage it as its hull is overall quite empty, causing your shells to do little to no damage. Some identifying features of the ZSD63 is its rather boxy and tall hull with a geometric turret sitting at the back, slightly similar to a Wirbelwind's. The firing manner is also distinctive: the sound and green tracers are very rapid, much like a buzz saw, but then it will remain silent for half a minute reloading. Note that an experienced ZSD player will hold its fire or shoot in single salvoes with long halts between, making it look like that it's reloading. Armour piercing belt is recommended since their high penetration can tear through the ZSD's armour with ease and knock out its crews.

Becoming allies with Nazi Germany gave Romania access to German aircraft. It is reported that Romania received Hs 129 A series aircraft.[2] The Hs 129 A was known for being extremely underpowered with its Argus As 410 engines, and B series aircraft were soon produced with more powerful Gnome-Rhône 14M radial engines. Romania received the latest Hs 129 B-2 version in June 1943; and they were put to use against Soviet forces on the Eastern Front[3]. The Romanian Hs 129 B-2s typically carried a 30 mm cannon under the fuselage, and proved to be very effective in the ground attack role, reportedly "bringing Soviet tank and infantry attacks to a halt time and again".[3] On 23 August 1944 after Romania had been suffering heavy losses against the advancing Soviet forces King Michael I of Romania ordered Antonescu to surrender. When Antonescu refused the king had him arrested and declared war on Nazi Germany, joining the Soviet advance.[4] It is unclear if the Hs 129s were used against Germany.