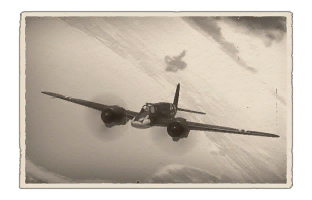 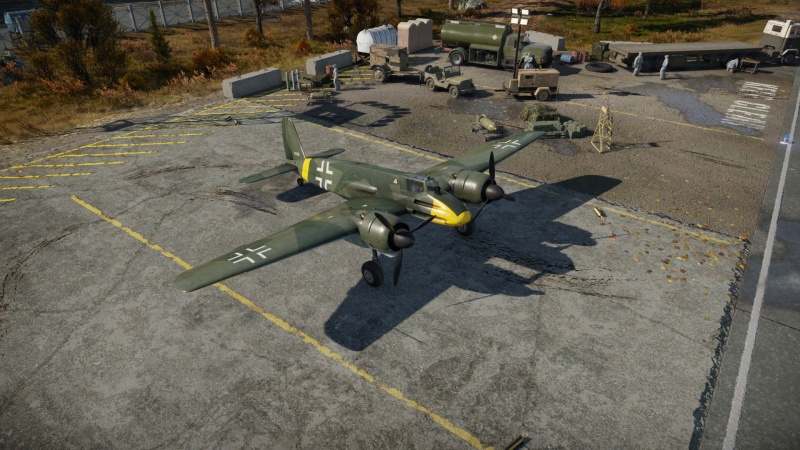 The Hs 129 is a ground attack aircraft, designed mostly to take out tanks and armoured vehicles and fulfil other roles associated with CAS. Both the 30 mm MK 103 and 37 mm BK 3.7 are capable of knocking out medium tanks, light tanks, and light pillboxes while the 20 mm cannons can easily destroy armoured cars, mobile AAAs, and other lightly armoured equipment. The plane is both slow and sluggish, meaning that it practically has to go after ground targets, but the armament and armour somewhat compensate for that and enable the plane to take out nearly all ground targets except for pillboxes and heavy tanks.

The Hs 129 B-2 can be outfitted with the following ordnance: 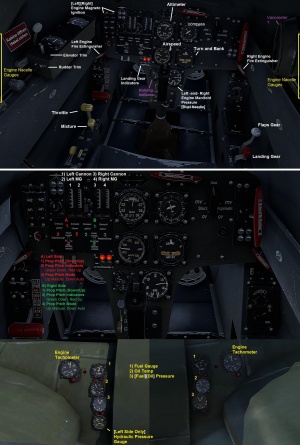 Yak-2 KABB - Do not think that the Hs 129 B-2 can confidently outmanoeuvre this plane just because it is twin-engined. The Yak-2 has an amazing turn rate for a heavy fighter, thus the Hs 129 B-2 must avoid turning with it, if not dogfighting with it in general. It bears a pair of ShVAK cannons that can easily damage vital parts like engine or cooling systems. It has green camouflage, greatly resembling an Me 410 but with an H-tail like a Bf 110's.

ZSD63 - A deadly enemy to face in Tank Realistic Battles. Though it is hard to identify specific SPAA vehicles on the ground (especially when they are shooting tracers at the plane), if a ZSD63 is identified, avoid it at all costs and do not attempt head-ons with it, ever. It can easily snap a wing off by causally putting a short burst in the Hs 129 B-2's flight path. Don't even get close to it unless it is occupied with another friendly or if the Hs 129 B-2 is equipped with a bomb that it can use. The Hs 129 B-2's 30 mm or 37 mm cannons in the secondary armaments cannot effectively damage it as its hull is overall quite empty, causing your shells to do little to no damage. Some identifying features of the ZSD63 is its rather boxy and tall hull with a geometric turret sitting at the back, slightly similar to a Wirbelwind's. The firing manner is also distinctive: the sound and green tracers are very rapid, much like a buzz saw, but then it will remain silent for half a minute reloading. Note that an experienced ZSD player will hold its fire or shoot in single salvoes with long halts between, making it look like that it's reloading. The armour-piercing belt is recommended since its high penetration can tear through the ZSD's armour with ease and knock out its crews.

The German Henschel Hs 129 was a single-seater twin-engine attack aircraft built for combat with tanks.

For the designers of the Henschel firm, which specialized in the manufacture of armoured vehicles for the Army, the most difficult challenge was aircraft survivability. They sought to protect the pilot and the most vulnerable components of the aircraft. Their desire to keep mass as low as possible led them to build a cockpit encased in 75 millimeters of glass. The design was very cramped and poorly regarded. Among other inconveniences were the tiny control panel and short control stick.

Despite the plane's shortcomings, the Luftwaffe desperately needed aircraft for the assault of 1940, and in the winter of 1940, Henschel received an order for a series of Hs 129 planes. With the occupation of France, a large number of Gnome-Rhone 14M engines were confiscated, each running at 700 hp. Experiments with installing more powerful (albeit unreliable) engines led to the creation of the Hs 129B, which had superior specs to the original Hs 129 and could return all the way to base if forced to fly with only one engine.

Serial production of the Hs 129B-1 began in 1941, and May of the following year saw the launch of the modified Hs 129 B-2, which had a modified fuel system (along with several other minor changes).