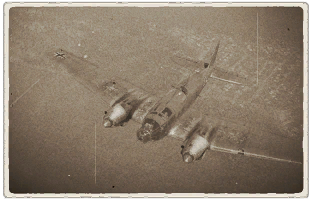 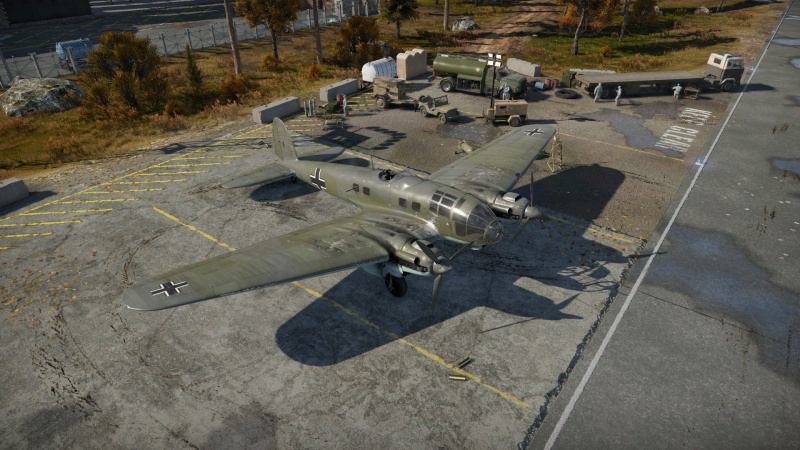 A medium bomber which is surprisingly versatile as it can carry over 30 small bombs or up to 2 x 1,000 kg and a 250 kg, which are capable of destroying a base. It can also carry a Fritz X guided bomb. This plane rips easily and should not be used to dive bomb as previous German bombers have. Its gunners are underpowered and should not be trusted to defend against fighters. It is best to avoid contact with fighters, as while fast firing, the guns are very inaccurate.

Being a bomber, it has a poor turn time. It has 2 good engines making it possible to reach your target. The aircraft doesn't like dives or speeds greater than 500 km/h. In conclusion: don't turn, dive, climb too much, just go in a straight line.

The He 111 H-6 can be outfitted with the following ordnance:

Using the 1,400 kg Fritz X bomb could allow for the delivery of a single heavy payload onto a target with precision, with the cost of only allowing the He 111 H-6 to carry only one bomb for this purpose.

The Heinkel He 111 was a German monoplane medium bomber (also torpedo bomber and attack bomber). The Hе 111 H-6 quickly became one of the most widely used variants of the Heinkel bomber. It saw action on all European fronts. Popular with aircrews, easy to fly and with excellent manoeuvrability, the bomber was widely used in a large number of roles.

In early 1942, the Luftwaffe planned to replace the He 111 with the new He 177 A heavy bomber and the Ju 288 medium bomber, but a large number of problems with the new designs meant that the He 111 remained in production despite becoming increasingly obsolete. The aircraft was easy to mass-produce, required comparatively little expense and was easy to maintain. It remained quite adequate on the Eastern Front, where anti-bomber opposition was relatively weak, even though the Heinkel's short range did not allow it to reach strategic targets deep in the Soviet rear.