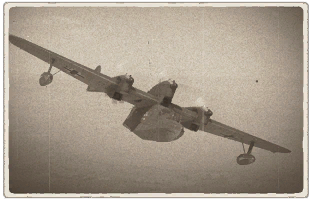 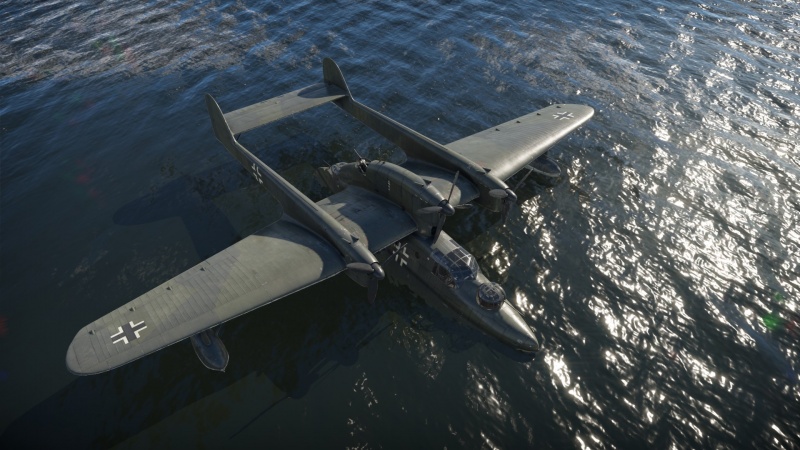 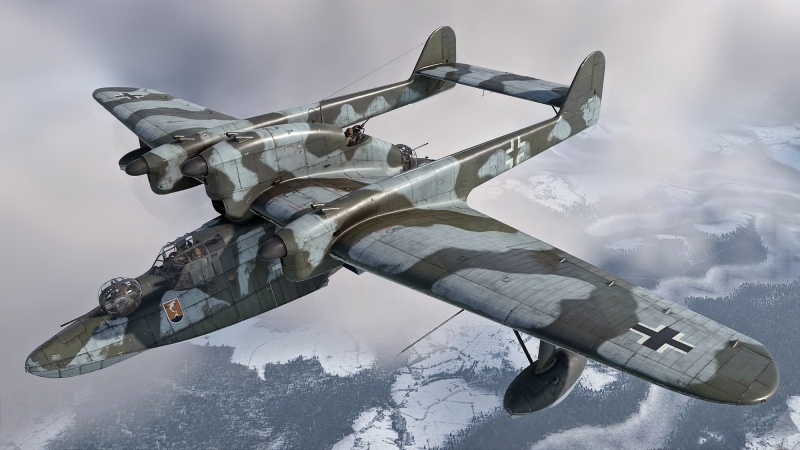 The first regular tree seaplane for the Germans was the main unit of the Luftwaffe for ocean patrols from nearly the beginning of the war. Called the "Flying Clog" by her crew, it was capable and versatile machine although under powered, unique in using opposed-piston diesel engines and a steel tube spar. The C-1 model chosen for the game comes with a formidable defensive armament and average bomb load for Rank I.

Even though the plane has 3 engines, it is very slow and its top speed is not high enough to escape from enemies. Take-off from water takes a good deal of distance, and the plane does not manoeuvre well on rudder alone, so give yourself room. In the air, save flaps for when absolutely needed, it is better to keep airspeed. If trying to land in a naval cap point, fly very low and start slowing well before cap zone, drop flaps when possible. It is recommended to practice water landing in Test Flight to learn landing distance and how far the plane will drift (there is no water brake).

The plane has no dedicated armour, but its sturdy airframe makes it pretty survivable. When one of the engines is damaged, the plane can keep flying with the two remaining engines. A hit to the self-sealing fuel tanks will cause a fire and some damage to the airframe but the fire will not last long enough to destroy the plane.

It is most important to unlock the MG 131 and MG 151 belts to select the best ammo, with the Compressor, Engine, and Wings repair being next. After that, you can unlock the rest as you please.

The BV 138 C-1 can be outfitted with the following ordnance:

Being a small bomb, precision is important, however it is dangerous to get close to player vehicles. Fixed targets are the preferred choice.

This is exceptional defensive armament for this aircraft, especially for its BR. Most opponents one will face have rifle or heavy calibre machine guns, rarely will it be 20 mm. Be familiar with the blind spots for the rear guns and manoeuvre for the best advantage, you might have a good chance to punish an attacker who dares to attack you!

With a small bomb load of six 50 kg bombs, do not expect to play a big role in Air battles in terms of bombing; however the 20 mm and 13 mm defensive weapons makes up with a potent sting if attacked. Be familiar of the turret arcs, and fly low to cover your unprotected belly. The BV 138 can be used as a low-altitude slugger in Air RB where its powerful turret-based cannons are able to blast through any monoplane or biplane it may face at its BR. Uptiers with the BV 138 can be much more unforgiving with this tactic, but the potency of its defensive armament still remains.

It is naval missions where "the Clog" will shine, capping unguarded points or sinking boats with its armament, being more durable than the single-engine seaplanes often used. Make sure to have this in your Naval lineup!

Not immediately obvious, the BV 138 is one of the more unique vehicles in game: a twin boom fuselage is very rare for a seaplane design, the Sikorsky S-38 the closest analogue and possibly inspiration for this one. The little known but brilliant aircraft designer Dr Richard Vogt was hired away from Kawasaki Aircraft in Japan to join the Hamburger Flugzeugbau (HFB), bringing with him some highly innovative aircraft technologies. One of his first projects was the Ha 138, a twin-engine seaplane with gull wing similar to the PBM or the Be-6 but with twin booms to the tail plane, all to keep them high above the water. Unfortunately, the also highly innovative Jumo 205 diesel engines were underperforming so a third engine was mounted on the fuselage as an expedient modification. The first Ha 138 (V1) was, well, a failure. The fact it did not crash in tests was a minor miracle. The next one (V2) redesigned to be a straight wing with integrated middle engine was not much better, but the lessons from these early experiments were learned and V3 was scrapped half started.

With the company now called "Abteilung Flugzeugbau der Schiffswerft Blohm & Voss", "Blohm & Voss" for short, the manufacturer prefix was changed from "Ha" to "BV" (the only all capital letter Reichsluftfahrtministerium code) and the completely redesigned BV 138A-0 (V4) was built. All the shortcomings from the first two designs were eliminated and the Reichsluftfahrtministerium (RLM) and the Luftwaffe (LW) was happy with the design and ordered it into production. There were still shortcomings with the underpowered engine, so to compensate mounting points for the HWK 109-500 booster rockets where added to aid in takeoff.

The original 138 was well armed aircraft for the period, sporting an early 20 mm cannon in the nose turret, very likely to attack boats and ships. Interestingly the bomb racks were added much later in the B version. It was literally a rack bolted under the right wing (and only the right wing), and could also carry small depth charges too. This was clearly an afterthought, and possibly a field modification for older units. The B version also sported standardized with MG 151 cannons (not clear if 15 mm was used at one time), the top turret being MG 15 or with the C model the MG 131. The BV138 also enjoyed an armoured fuel tank! The signature "Dr Vogt steel tube spar" was the main fuel tank, the wall was thick enough to resist machine gun rounds short of heavy AP cannon shells.

Called the "Flying Clog" for its wooden shoe-like hull shape, the plane was well liked by the crews. With an exceptionally long range and a comfortable cabin to work in, it was the eyes of the Kriegsmarine. Because the engines were diesel, it was common for the Flying Clogs to refuel from submarines at very distant locations.