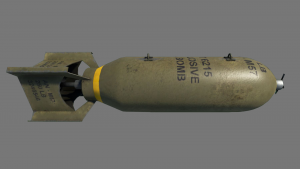 Early on, the Mark series of bombs proved to be largely unsatisfactory in a number of different areas. The bomb body itself was weak due to the sheet metal it was made from and the number of welds needed to join the pieces together. The stabilising fins were made of flimsy metal which tended to distort during both the handling and flight of the bomb, adversely affecting accuracy. For the field technicians, inserting the fuse was a complicated process which required removing the stabilising fin structure, potentially damaging the fins. The fuses tended to have a high fail rate and due to their design, they would instantly arm after release from the aircraft posing a direct threat to the delivery aircraft. Later modifications would eliminate many of the negative factors to include adding a nose fuse, time-delayed arming of the fuse, strengthening of the stabilising fins and adding primer detonators to ensure proper explosive train sequences. Other changes including streamlining all bomb bodies and utilising 100% T.N.T. as an explosive filler resulted in the newer "Modified Mark" series of Army bombs.

With the approach of World War II, the U.S. Army (including the Army Air Corps) and the Navy standardised their series of bombs allowing for interchanging between services, consolidating manufacturing capabilities and allowing for modifications which enabled British service aircraft to mount these bombs too. Even after the standardisation of bombs in 1941, the standardisation process went through a few phases of further refinement, the first of which changed all high-explosive bombs to be termed general purpose (G.P.) or general purpose high-explosive (G.P.H.E). Later the designation of "demolition bomb" would come back for a few specific bombs.

When bombs are dropped, there is always a chance that something in the explosive train of the bomb will fail and it will not explode. Early AN style bombs were defusable in the event that they did not explode on contact, meaning that any unexploded AN bomb could have the fuses and boosters removed without the bomb exploding, rendering it inert. To counter this and allow for the potential "dud" bomb to explode when tampered with, the AN G.P.H.E. series bombs with the modification "A1" annotated that these bombs now had special pins mounted in the bomb's baseplate which fused with the explosive filler making it impossible to remove the booster without causing the bomb to detonate. Other modifications later added would include minor changes to the bomb body or the type of explosive filling used. During this time a second option for bomb tails was added, the box-type tail was already the mainstay of the bombs, however, to create a more aerodynamic bomb a conical tail assembly was added. This stretched out low profile tail improved the aerodynamics of the carrying aircraft, allowing it to carry more ordnance.

Modifications were developed to slow down or retard the flight of bombs, allowing for the delivery aircraft to depart out of the blast zone before they hit and detonated. Several options became available which allowed these bombs to remain aerodynamic low-drag while en-route to the target, but when deployed converted to high-drag, slower falling bombs. One option was to attach four bladed plates to the rear of the bomb so that when the bomb deployed, these plates would pop out and create high-drag to slow the fall. Another option was to use a ballute which was basically an airbag which deployed from the rear of the bomb that acted like a drogue chute, effectively causing high-drag. Later during the fighting in Iraq, the US military brought back the 250 lb Mk 81 bombs due to their ability to be used when deploying against a specific target and to help minimise collateral damage.