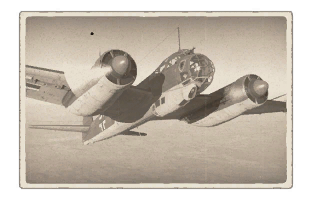 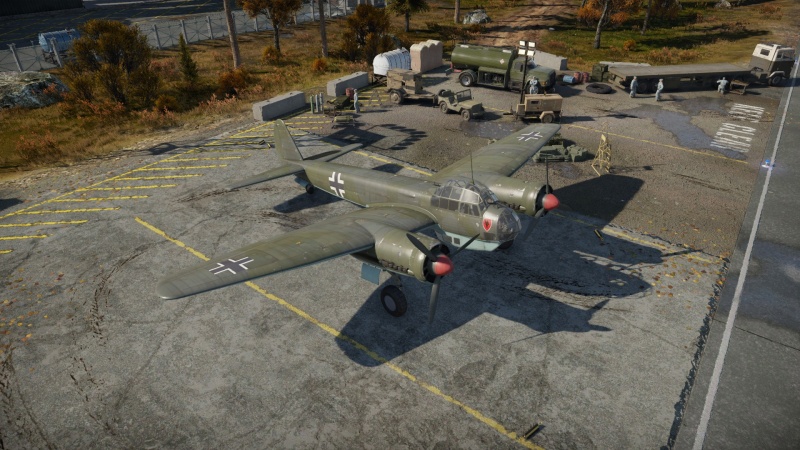 The Ju 88 A-1 can be outfitted with the following ordnance:

The Ju-88 A is a fast bomber with a rather light bomb load.

In any air AB/RB match, attack enemy AI units as your bombs barely have enough potency to destroy a base. Maintain your speed to evade pursuing fighters. In ground RB matches, it is recommended to carry the 2 x SC500K bombs as they can help you destroy reliably ground targets. With only a rifle-calibre MG as offensive armament, head-ons are ill-advised.

If you are under attack, force the enemy to tailgate you as that is your only chance of returning back to base. Dive down and have your gunners open fire on the enemy. There are 2 gunners that cover the rear of the plane, creating a blank spot for fighters attacking perpendicularly to the flight direction. 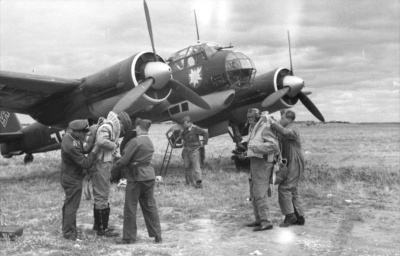 The Junkers Ju 88 A-1 was the first variant of the Junkers Ju 88, a German fast bomber. Designed as a super-versatile aircraft, the Ju 88 fulfilled a variety of roles including frontline bomber, torpedo-bomber, minelayer and reconnaissance platform. The aircraft saw extensive service during the Battle of Britain, and later over Soviet skies during Operation Barbarossa. The design of the aircraft was highly obsolete by the end of the war; despite this, over 15,000 Ju 88s of all variants were built.[1][2]

The Ju 88 originated from a 1935 requirement for a new high-speed dive bomber with a crew of 3, capable of reaching 480 km/h.[1] The Henschel and Messerschmitt design firms also submitted designs, but later withdrew them; thus, Junkers won the competition and proceeded to produce prototypes. The first Ju 88 prototype flew in December of 1936, and managed to reach a speed of 520 km/h;[1] Later on, a pre-production Ju 88 set a record for a 1,000 km circuit, averaging 517 km/h. After the completion of ten prototypes of the Ju 88 A-0 series, the Ju 88 A-1 was ordered into production with deliveries starting in 1939.[1]

The Ju 88 is a conventional twin-engined light bomber, with the engines mounted in nacelles on each wing. The aircraft has a crew of three, being a pilot, bombardier and radio operator/rear gunner. The aircraft's armament was sparse, consisting of just three 7.92 mm machine guns; this was steadily improved in later Ju 88 variants. The A-1 could carry a maximum bomb load of 1,000 kilograms in standard load, though heavier loads could be carried with modifications.[1]

The Ju 88 A-1 started entering service with the Luftwaffe in 1939; 69 aircraft were built that year.[2] The aircraft saw its first combat attacking British shipping in the fall of 1939.[2] The aircraft served extensively in the Battle of Britain as the main Luftwaffe bomber, and fulfilled the same role in Operation Barbarossa, the attempted German invasion of the USSR. By that point in time, it was complemented by more advanced variants of the Ju 88 such as the Ju 88 A-4.

During its time in service, it became highly apparent that the Ju 88 A-1 was not well suited to its task. Namely, the aircraft wasn't adequately armed, with just three defensive machine guns.[2] Thus, the later Ju 88 A-4 variant introduced a heavier defensive armament of five 7.92 mm machine guns; later derivatives such as the Ju 188 featured even more defensive armament.[2] As well, the aircraft experienced structural strength issues, which prevented it from entering fast dives without breaking up. This was also remedied by the later Ju 88 A-4.[2] Despite its flaws, the Ju 88 was a versatile, reliable aircraft and over 15,000 aircraft were built before the end of the war.[1][2]