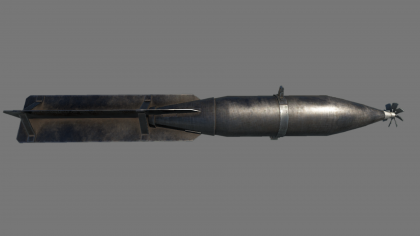 With and explosive mass of only 3.7 kg with a maximum penetration of 37 mm, making it almost unfit against medium and heavy tanks, unless dropped accurately upon the tank or in cluster. Its low explosive mass and penetration means it is best used for bombing light targets like SPAAs and light tanks.

The blast radius on the AO-25M-1 is very small, requiring high precision to hit a target. This means that unless you can aim this bomb well it is very difficult to use effectively.

It can be used against SPAAs, artillery positions, MG nests, or armoured cars. Its low explosive mass and penetration make it useless against most armoured targets and bases.