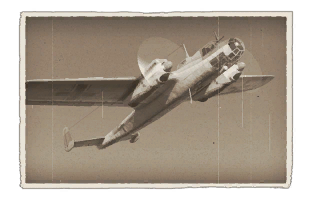 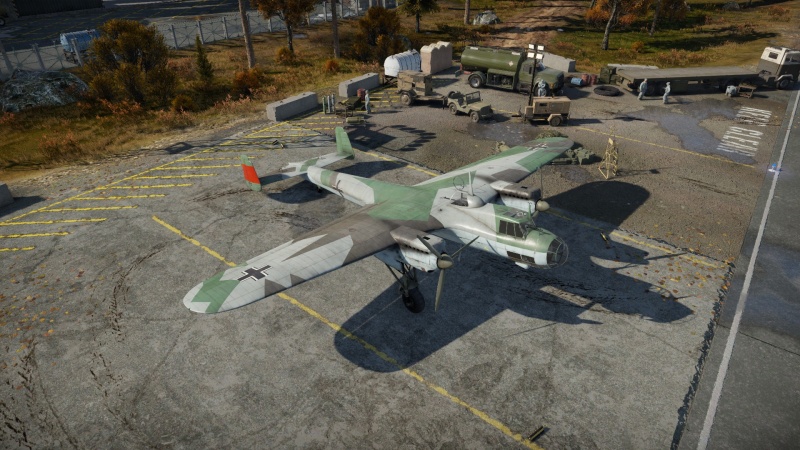 The Do 17 E-1 does not have any armour. There are 2 fuel tanks, with 1 close to each wingroot.

The Do 17 E-1 can be outfitted with the following ordnance:

The Do 17 E-1 can be used in two distinct methods. The pilot can dive to low altitude to reach higher speeds and use the 10 x 50 kg bombs to eliminate ground targets or it can be used as a support bomber flying behind other heavy bombers and finishing bases. This approach is dangerous and less rewarding because you are slow as you climb and fighters can easily pick you off.

Bombers capable of attacking with machine guns or cannon pods (e.g. B-25s or Ju 87s) can constitute early threats and any climbing fighters will easily out turn you and pick off your engines or control surfaces.

The Dornier 17 was a bomber operated by the German Luftwaffe and produced by Dornier Flugzeugwerke. Designed as a twin-engine fast bomber (Schnellbomber) as soon as 1933, its role was to perform bombing runs and then evade opposing aircraft by relying on its speed. The opposition at the time was mostly biplanes and early monoplane fighters. The initial variant of the bomber, the Do 17 E-1 variant entered production at the end of 1936. The E-1 had a low bomb load due to its small internal bomb bay and to the parasitic drag created by externally-mounted bombs. 328 Do 17 E were produced, they were operated by the Luftwaffe and the Yugoslav Air Force which had purchased 36 planes. When WW2 broke out, the Do 17 was along the He 111 one of the main bombers used by the Luftwaffe. It was used as a frontline bomber to support advancing troops, bomb enemy positions and airfields and as a reconnaissance aircraft to spot enemy columns and movements.