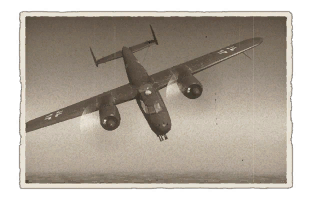 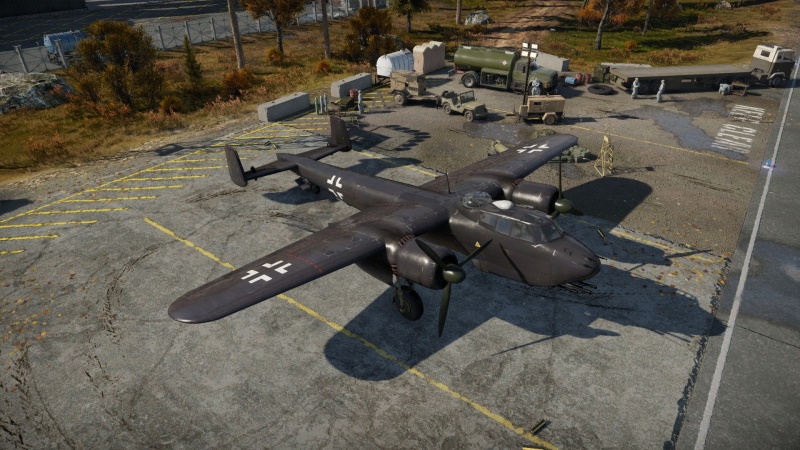 New 20 mm belts are a good start for this machine. The extra punch of the air-belts is useful. Otherwise, there is not a lot worthwhile to go for weapons wise. Long burst are not needed, turrets are not a game changer and the 7.92 mm's aren't the meat of this plane. However for unlocks in tier I/II Offensive 7 mm and Turret 13 mm outclass the alternatives (except Compressor). Compressor, Engine, Wings repair and Engine injection are the desirable first performance upgrades.

The Do 217 J-1 can be outfitted with the following ordnance:

This heavy fighter has only limited capabilities, due to low manoeuvrability. Here are some of them:

This tactic is good for one reason: you have an arsenal of guns in the nose. Find a lone fighter and engage it head-on. If he tries to engage you, go ahead (unless he has hub mounted 37 mm cannon like some Yak versions, in that case don't engage). But keep in mind that you will need to wreck the enemy aircraft so you don't damage your aircraft. If the enemy dodges the attack and tries to attack you from behind, then you are in a dangerous situation. This tactic is risky, but if you have a wingman fighter or two, it shouldn't be a problem. 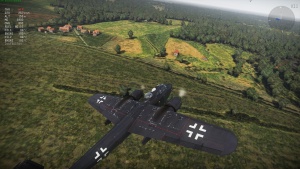 Do 217 showing fuselage and wing structure.

There are 2 kinds: with bombs or without. The problem is that bombs will make you even less manoeuvrable and you cannot dive bomb, so unless you are really confident, don't use them. Use your guns on soft targets and you will score success. But don't go too low, or you will crash as your manoeuvrability is poor.

The 8 x 50 kg bombs are of little use even in simulator battles. They contain little explosive, resulting in a very small blast radius. The Do 217 J also happens to have no bomb sight, which makes dropping those small bombs accurately very challenging with the cockpit view. Ground pounding therefore should not be the primary mission for the Do 217.

After seeing the armament this plane carries, you might think that hunting bombers will be an easy task. To a certain degree, yes. The main flaw in this tactic that bombers are usually flying at altitudes you can't reach and your climb rate is also poor. Instead, try to engage the bombers flying at low to medium altitude, usually performing dive runs. They are easy prey, but if they are escorted by fighters, try to take those out first in head-on attacks or have fighters assist you.

In Simulator, the Do 217 J is a good tool for the bomber-hunting playstyle. Its large size allows it to carry a heavy-punching armaments of 4 x 20 mm MG FF/M cannons plus 4 x 7.92 mm MG17 machine guns in the nose, with each holding plenty of ammunition. This firepower at its BR is something that cannot be ignored by any bomber. However, the high weight of the Do 217 means that it has very slow acceleration and climb rate, which can make it hard to catch up to a target sometimes. Its lack of manoeuvrability also strictly limits its targets to similarly heavy aircraft. Finally, it has extremely restricted field of view due to the thick canopy frames and no glass towards the back at all. You even may need to use the gunner view like a bomber just to be aware of your surroundings.

When taking off, you can't use flaps at all while you accelerate on the runway. This is quite a heavy plane, so you need to gather more speed before lifting off (flaps do generate lift but also decrease speed), and you will use more of the runway than other planes. Do not forget to counter the shift to the left by kicking the rudder to the right. Deploy takeoff flaps when you are above 200 km/h, and pull the stick back. This process can be harsher if there are obstacles at the end of the runway (e.g. trees, houses). Upon being airborne, immediately retract gear and take-off flaps when you are beyond 240 km/h.

Getting to a target's altitude takes time and patience given the low climb rate or the Do 217. Ambush around friendly ground targets (e.g. tank columns, artillery positions, convoy routes, etc) or bases (especially half-bombed ones) so there is a better chance of catching enemy bombers or ground-pounders. The Do 217 cannot really perform BnZ on a bomber since it is hard to quickly climb higher than them after spotting them, therefore you will usually engage the target aircraft at a similar altitude. Track the target aircraft with lead pursuit to close in faster. The Do 217 J's sluggish flight performance does not allow much manoeuvres when intercepting, thus you cannot utilise tactics such as deflection shooting as the turns bleed too much speed. It is best to just sit behind a bomber and carefully shoot at it, although this is not beneficial for the player to develop and practice the said tactics for later aircraft. Bombers at similar BR have weak defensive armaments which do little damage to the rugged Do 217 J. Open fire once the target's wingtips are about to fill up the aiming reticle completely. The big ammo pool for the cannons (200 rpg) allows some spray-and-pray, but it is still better to fire with 1-3 second bursts. The 4 x 20 mm cannons are very efficient at tearing off flaps, cracking open cooling systems and damaging engines, and common bombers around this tier will not survive long. The Do 217 J's turn rate allows it to keep up with most bombers should they manoeuvre to avoid the Dornier's guns, however against certain bombers (e.g. SB2M) the Do 217 will get out-turned. These bombers, however, will also bleed speed and energy in a tight evading manoeuvre, allowing you to catch up. If they are out of your view, switch to gunner view to locate them.

If you have to deafeat a Do 217 J with a good fighter, engage it from the side. That will make him turn, in which case he will slow down, making him easy to destroy. If he tries to escape upwards, follow him. He can't climb very well. If he tries to dive, follow him also. You can achieve higher speeds and still manoeuvre better. Here is the important advice: if the Do 217 tries to engage you head-on, fly straight at him, but at 900 m before him, break into a turn of about 45 degrees left or right. He will try to turn, but he can't manoeuvre well. Then follow him and engage him from behind. 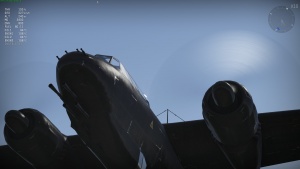 Despite the heavy frontal firepower, you may find yourself in a position where you cannot use it. Fast nimble fighters will be hard to target, especially if they know that you are coming. Fortunately, you have two hard-hitting 13 mm machine guns to the rear with relatively good coverage. These can be used very effectively, particularly as many opponents will underestimate your defensive firepower.

In simulator, if an enemy fighter catches you, do not bother to try turning and get your guns on it. You simply cannot. Instead, keep flying straight to keep your speed up, and use your turrets to ward off the chasing aircraft. The 2 turrets have very good coverage, which may scare off some new simulator pilots.

Another tactic you can use is to Hit and Run. This method requires you to plan your attack before engaging a target and relies partially on your team. Being a heavy plane has its ups and downs. On the downside, it turns like a brick and on the bright side, it hits like a brick. If you plan your intercept so that it finishes near your teammates, you should be safe. In order to do so, you might have to flank the enemy. Another way to pull a hit and run is to try to engage as many fighters as you can in head-ons, and then to return to base and rely on the gunner's aim to protect the plane.

As mentioned before, the Do 217 is a heavy aircraft, making landing slightly tricky. In essence, it is better to approach at a shallower angle and a slightly higher speed. Because due to the sheer weight and drag, the Do 217 will decelerate and sink much quicker than fighters when the throttle is lowered. So, if you approach at the same height and speed as you normally do in a fighter, you will soon realise that you are close to a stall/crash quicker than expected, which may lead to a crash. Thus, you need to approach at a slightly higher speed and a slightly lower height than fighters. As the airstrip fills up the windscreen, drop down to treetop level and sustain speed to at least 250 km/h with landing flaps and gears down. As you come closer to the runway decelerate and descent slowly, keep up your speed to around 220 km/h right before touchdown. Gently put the plane on the ground, as the Do 217's main landing gears are not sturdy enough to withstand a heavy touchdown.