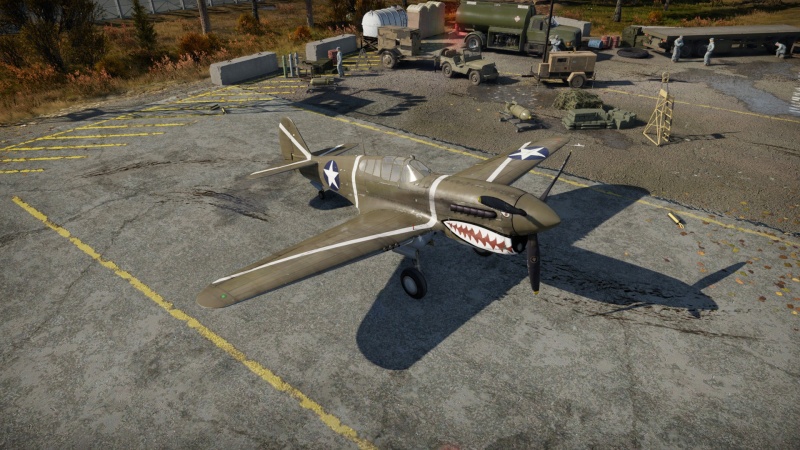 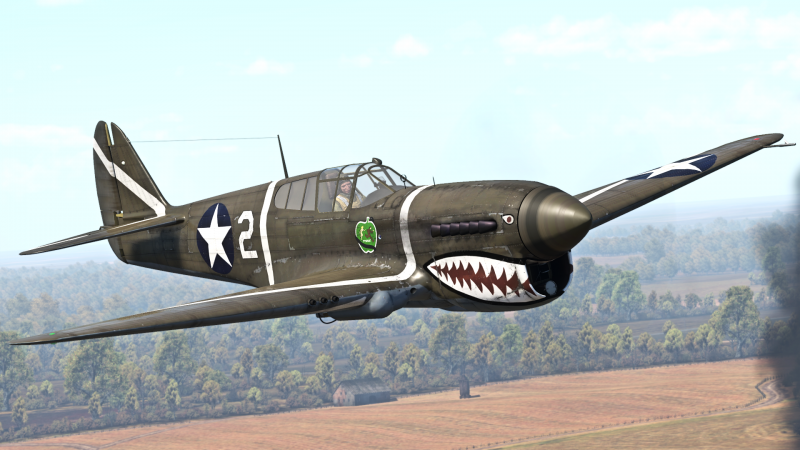 The P-40F-10 Warhawk is a pursuit plane: its role is to intercept enemy fighters and bombers. The F-10 differs noticeably from the previous P-40 variants on 3 points:

With the new features present on this plane, it now has a decent performance at high altitudes, as well as a superb diving capability while maintaining the ability to stand its ground in a dogfight, but not being the best at.

With a rather average climb ratio this plane will be able to reach 5,000 m in about 4 to 5 minutes, at that altitude it will maintain a decent straight-line acceleration and won't reach performance limits until 5,600 m. Above that altitude both the engine power and surfaces control will continuously decrease.

This plane has a good dive speed acceleration and it can also bear high maximum speeds, giving it a good Boom and Zoom ability. It will be able to get out of a dive if pulled up at a maximum speed between 740 km/h and 760 km/h, although surfaces control will begin to decrease at 725 km/h, making it harder to adjust the direction.

When turn fighting, the P-40 will show its best turn ratio and manoeuvrability at 450 km/h; and if needed, combat flaps can be safely used at this speed to provide a slight boost. However, once it begins to lose speed, two problems will appear. First, it will begin to lose rudder stability, meaning that movement on the plane's vertical axis (yaw) will get unstable and sluggish, thus becoming harder to get guns on target. Second, the plane's turn ratio will begin to worsen once the speed drops below 350 km/h.

The P-40F-10 can be outfitted with the following ordnance:

The P-40F-10 performs similarly to the P-40E-1, although it is neither as fast (at lower altitudes) nor as good at turning. Although this is compensated with the new Merlin engine, providing a better performance at higher altitudes, as well as the re-designed tail section, which allows a better elevator control at higher speeds, making it a very competitive aircraft when using Boom and Zoom tactics. It can also take a good amount of machine gun hits while keeping the critical modules safe; however, cannons will pose a more serious threat specially if they hit the wings. This aircraft comes too with a good fire power, which considering all the characteristics listed previously, allows for the pilot to choose from different tactics as well as objectives when engaging enemy aircraft.

At the start of a match it's advised to reach and altitude of 4,500 m to 5,000 m, for this WEP can be used, shallowly side climbing at a 20° angle, up to 3,500 m, then reducing throttle to 100% and a 17° angle (to avoid engine overheating) until the desired altitude is reached. Once up there start heading towards a more central map position, while keeping it leveled off in order to regain speed.

Up here, enemy bombers will either be at the same altitude or lower. Packing 6 x 12.7 mm machine guns, the P-40 usually deals fatal damage to enemy bombers in only one pass, either destroying the wings or setting them on fire; making them a good target to aim for when in the air. Therefore, if any enemy bomber, or group of bombers are spotted nearby, it's a good decision to attack them. Just keep in mind to check the surroundings as you don't want to get jumped on by a group of enemy fighters while attacking their bombers.

Taking advantage of the P-40F-10 capabilities, there are three ways in which you can attack enemy fighters. According to the situation, you should either:

The P-40 can be used for BnZ fighting, bomber hunting and ground pounding in Sim. It is a decent plane with distinct pros and cons. Its heavy firepower of 6 x 12.7 mm MGs can critically damage the enemy and rip it apart. It has great dive speed and decent level speed, capable of outrunning slower opponents. However, it is a nose-heavy plane so unlike other planes, the P-40 has to trim the elevators upwards. It has quite limited visibility with lots of canopy frames and a razorback design. The P-40's over-the-nose visibility is one of the worst due to its big, long engine, and the small intake on top of the cowling, making leading very hard. Moreover, its engine tends to overheat frequently even with 95% throttle, meaning you have to cut throttle a lot to avoid damaging the engine.

The general tactics remain the same as above: BnZ the enemies. However against bombers, utilise deflection shooting instead of leading the shot like in realistic.

Although early P-40s were equipped with one of the most powerful inline engines available to the American aircraft industry at the time, it quickly became apparent that even that wasn't enough. Due to its advanced and robust design, it's no secret that the P-40 was a relatively heavy aircraft for its type, resulting in power-to-weight issues which would never be fully solved. Nonetheless, Curtiss engineers continued tweaking and improving the design in all aspects, trying to lessen the drawbacks of high weight and insufficient power.

In 1940, the American Packard Motor Car Company acquired a licence to manufacture the Rolls-Royce Merlin engine, in an effort to satisfy the growing demand of the British aviation industry. Additionally, the licence gave American engineers access to a more powerful engine at a time where similar U.S. engines were not available. Naturally, Curtiss engineers didn't waste any time outfitting the P-40 with the brand new licence-built Merlin engine, resulting in the creation of the P-40F. Besides the internal engine upgrade, some external changes were also applied to the aircraft. For instance, the tail section of the fuselage was lengthened in an effort to counter the negative effects of strong engine torque on take-off and landing experienced on earlier modifications. With the changes applied, serial production of the new P-40F was scheduled to begin in 1942. As the British and Commonwealth air forces were particularly keen on a Merlin-engined P-40 variant, they were also the first ones to receive the new P-40Fs as early as summer of the same year.

Despite the British and Commonwealth forces receiving the P-40Fs first, the majority of the 1,300 manufactured machines served with units of the USAAF in the Mediterranean theatre. By the end of the Mediterranean campaign in late 1943, the P-40F had successfully proven the value of the applied changes by presenting itself as a more than capable air superiority fighter, when matched up against previously superior Axis counterparts such as the Bf 109F/G and M.C. 202/205. During its service in the Mediterranean, experienced pilots, applying the right tactics showed that the Warhawk could no longer be considered the underdog, but instead an equal at very least.

Interesting: The Soviet Union received P-40 fighters under the lend-lease program; they were considered to be aircraft with medium efficiency but were quite durable. Lieutenant Alexei Khlobystov in one battle conducted two successful rams and after that encounter, the pilot and his "Kittyhawk" returned to the airfield!