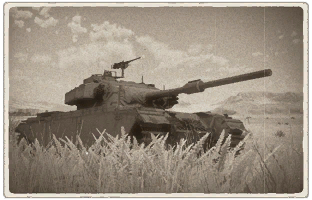 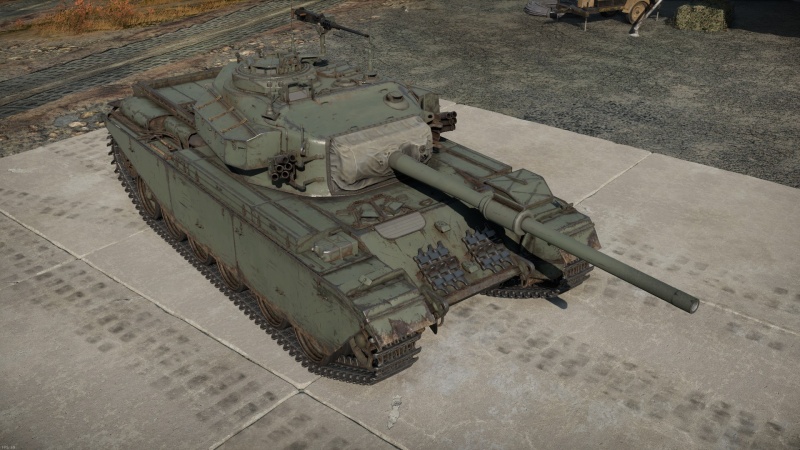 The Sho't (lit. "Whip") is a rank IV Israeli medium tank with a battle rating of 7.3 (AB/RB/SB). It was introduced in Update "Wind of Change".

The representation of the early fleet of Israeli Centurions bought from various operators, the Sho't performs identically to its British counterpart Centurion Mk.5/1, having good gun handling at its rank while suffering from somewhat insufficient protection and low mobility.

Players can tell the Sho't in-game as a Centurion Mk.5 right away as the bore evacuator is unique to later variants of Centurion (QF 20 pdr Model B), as well as the additional pintle-mounted M2HB machine gun, though it lacks the headlights found on the Australian variant. The overall protection is totally identical to pre-Mk 10 Centurion variants, which also means that it has the same cramped interior and any penetrating shots can knock out the Sho't right away.

Since the Sho't was directly imported from various sources, it shares identical mobility and its Rolls-Royce Meteor engine; players of British or Sweden Centurions will find themselves at home right away. This also means that the overall mobility is inferior just like most unmodified Centurions.

The QF 20 pounder Model B cannon on Sho't is identical to other 20 pounder guns in various services; with gun stabilizer and APDS at its disposal, the gun can be used to great effect against late war and early Cold War vehicles where a stabilizer wasn't commonplace.

The stock round, Shot Mk.1, is an APCBC shell; while its penetration is sufficient to penetrate tanks like Tiger II; it will not penetrate early Cold War tanks like M48A1 or T-54s. Additionally, it doesn't have any explosive filler, so players will need to aim for weakspots or ammo racks to achieve the most devastating damage.

The second stock shell, Shell Mk.1 HE, is practically useless against any armoured targets and not even enough to trigger overpressure damage. While it is still enough to blast exposed crews, it is suggested to ignore this shell.

Shot Mk.3 APDS is another story: its flat trajectory and high velocity helps it in hitting long-distance targets or fast movers. However, the overall post-effect is still quite disappointing, so players have to remember the weakspots or ammo racks just like with the Shot Mk.1. 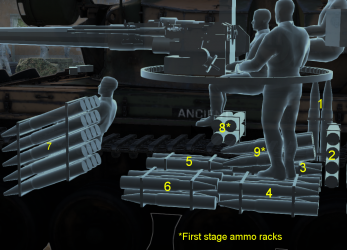 Unlike other Centurions, the Sho't has a pintle-mounted M2HB, giving it some capabilities to fight back against aircraft or lightly-protected vehicles; while the coaxial machine gun has changed from BESA to L3A1 (M1919A4) for logistical reasons.

Like other Centurions, thanks to the underpowered engine, Sho't is not a fast tank by any means and its 35 km/h top speed makes it lag behind some tanks at its rank, not to mention fast movers like Leopard 1. However, this also means that the Sho't can stay close with friendly heavy tanks (which are still common at the battle rating) and provide reliable fire support for them even on the move thanks to its gun stabilizer. Although the overall protection is not sufficient to withstand shots from enemies, the gun depression angle certainly helps to find hull-down positions and use the gun mantlet to absorb or bounce incoming shells. While some players prefer the high penetration of APDS, some might opt to use the stock APCBC for better spalling; but in most cases where the enemy has thick armour, APDS will be the go-to shell for Sho't.