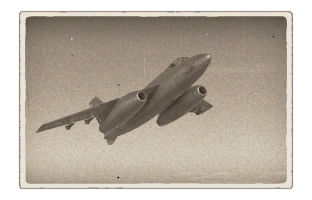 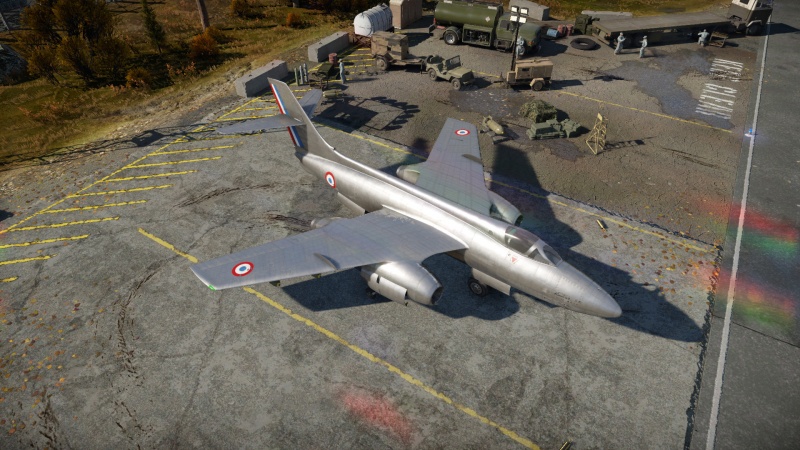 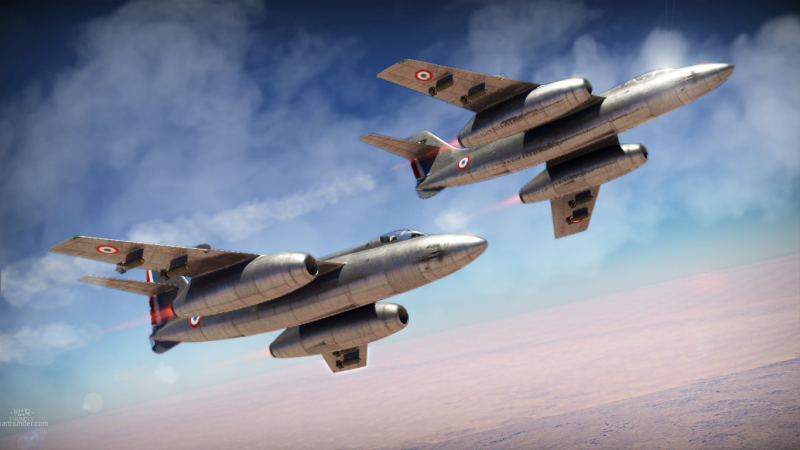 The S.O.4050 Vautour IIA is the fastest accelerating, climbing and diving subsonic plane in the entire game. The acceleration of the aircraft is ridiculous, coupled with the insane climb rate and diving capabilities makes the S.O.4050 IIA a very powerful aircraft.

The four machine guns are arranged in bundles of two mounted in the nose of the fuselage. Each is armed with the same amount of ammunition, which means that all guns will fire together until empty.

The S.O.4050 Vautour IIA can be outfitted with the following ordnance presets:

The S.O.4050 Vautour IIA should be used like the Hunter, but more aggressively. Always load 8 minutes of fuel, use the bomber spawn to spawn at 3,000 meters, rush to a base, drop your bombs then rush to the enemy airfield to catch enemies off-guard. Besides catching enemies off-guard, the Vautour IIA can cause the enemy team to panic by rushing - when enemy players see a Vautour going faster than 1,000 km/h and they're a lot slower - they tend to panic, causing them to scatter around to find space in order to gain speed which could possibly ruin teamwork. Do NOT turn. The Vautour is very bad at turning and rolling, it should be used as an exclusive boom and zoomer - like the Hunter. Gain speed, engage, zoom up, loop around, dive, rinse and repeat. The Vautour has excellent energy retention characteristics.

However, with the advent of air-to-air missiles, the Vautour's lack of manoeuvrability becomes a crucial weakspot. The maximum overload of +6G is often insufficient to evade missiles, especially when attempting to do so at high speed. As such, the Vautour is an incredibly easy for even an AIM-9B Sidewinder. In addition, the introduction of powerful, high-climbing jets like the AV-8C and Harrier GR.1, mean that it is now impossible to exploit the Vautour's climb rate to your advantage. These factors coincide to make the Vautour hard to play when uptiered, and as such, a more passive playstyle is recommended. When uptiered, you can either attempt to rush and force head-ons with enemy players, or you can wait for the enemy team to engage friendly fighters before bombing the bases.

In total 140 of the versatile and powerful Vautour aircraft were built by France between 1956 and 1959. The Vautour II-A was the ground attack variant; the II-B the bomber; and the II-N an all-weather interceptor. The first two variants saw greater service with the Israelis, whereas the interceptor was used by the French. All variants were still in use into the 1970s.

The II-N prototype, with two crew, had made its first flight in October, 1952, followed by the single-seat II-A in December, 1953. After nine prototypes, the French made an initial order for 440 aircraft, including 300 II-As. However, only 30 of the II-A would be completed, with the first entering service in 1956. In 1960, all II-A and the 40 II-B (the two-seater bomber model) that had been produced were taken out of French service and sold to Israel.