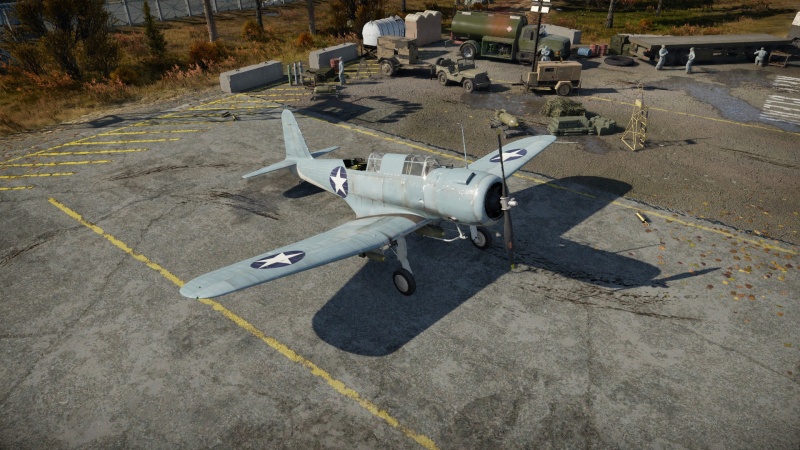 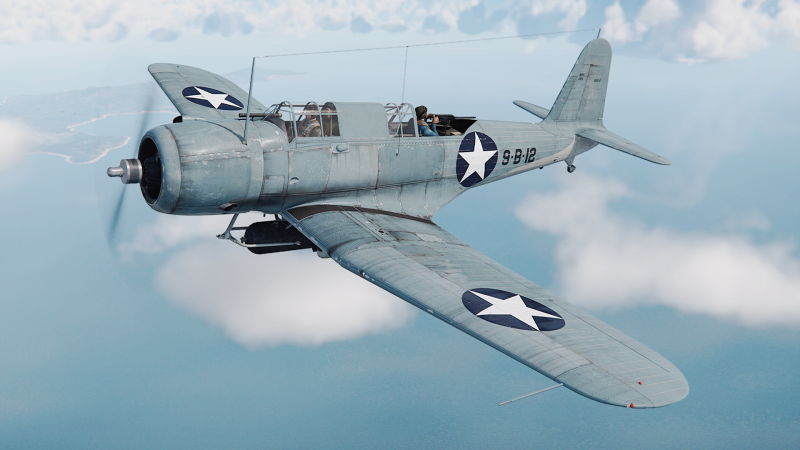 The SB2U was developed in the early 1930s and although considered obsolete at the outbreak of World War II, it still remained in service through the Battle of Midway. However, in 1943, it was withdrawn into training units and replaced by more advanced aircraft. This aircraft featured a constant-speed propeller which was intended to be utilized as a dive brake while performing dive-bombing attack manoeuvres. There are three hard points for bombs to be attached, one 250 lb bomb under each wing and a single 500 or 1,000 lb bomb mounted onto a pylon under the fuselage. The larger bomb was also attached to what was called a "trapeze", a device which would when the bomb was released, swing the bomb clear of the propeller arc.

The SB2U-2 is a carrier-based dive bomber. This aircraft is a fairly slow aircraft, but sturdy. Built as a dive-bomber, it excels at diving down above a target to release its bombs. Unlike many dive bombers in War Thunder, the SB2U does not feature divebrakes, instead, its landing flaps can aid in retarding the build-up of speed during a dive, helping prevent ripping off of wings in RB and SB. Wing mounted machine guns allow for this aircraft to strafe softer ground or water targets while waiting for bombs to reload (AB). Rear-facing dorsal gunner helps to ward off enemy attackers, but it isn't a game-changer for this aircraft. However, thanks to its rather low BR, it will face biplanes frequently that the rear 7.7 mm machine gun can deal with.

The SB2U-2 is typically an easy target for fighter and attacker aircraft. Due to its mission of bombing ground targets, the flight path is relatively predictable and the defensive turret can only do so much to rid a rear-attacking aircraft. The manoeuvrability and turning radius will make it difficult to get out of sticky situations, however, if you are unchallenged, then this aircraft excels at low-level bombing and dive-bombing attacks and is quite accurate. Most of the critical components are clustered in the front of the aircraft and are extremely vulnerable during head-on attacks.

The SB2U-2 can be outfitted with the following ordnance:

The second option will be to gain altitude. Going too high will render your bombs ineffective. The idea here is to gain several thousand feet, fly towards your target of choice and then dive on it. During your dive, your aircraft will build up speed, to prevent too much speed build-up and control stiffening, reduce your throttle and engage landing flaps ("F" by default) as the SB2U does not have airbrakes. This will allow you a controlled descent and the ability to line up your target easier, the unfortunate downside is that now you are slowly moving in a straight line, an easy target for enemy fighters. Once you swoop on your target and release your bombs, engage full throttle and retract dive brakes.

The mid-1930s was an exciting time of military aircraft development. As is with technological changes, designers, developers and engineers looked for ways to eke out as much power, speed or even damage infliction as possible. Aircraft which imbue the best of these qualities are typically the ones which get contracts with the military.

Shortly after the SB2U-2s began rolling off the assembly line floor they went to work with aircraft groups aboard aircraft carriers which included the Lexington, Ranger and Wasp replacing the ageing Curtiss BFC-2 biplanes. Though quickly themselves becoming outdated, the SB2Us served in the Pacific through the Battle of Midway, however, it was not long before they were pulled from the action and relegated to training units.

The sole surviving SB2U-2 was recovered from the bottom of Lake Michigan in 1990. In June 1943 during a training exercise with the training aircraft carrier Wolverine (IX-64), a pilot attempted a landing even after being waived off. After hitting the deck at a bad angle and after breaking off the tailhook, the scout bomber slid off the deck and sunk to the bottom of the lake; luckily the pilot was rescued. The aircraft has been restored and is now on display at the U.S. National Museum of Naval Aviation at Pensacola, Florida.