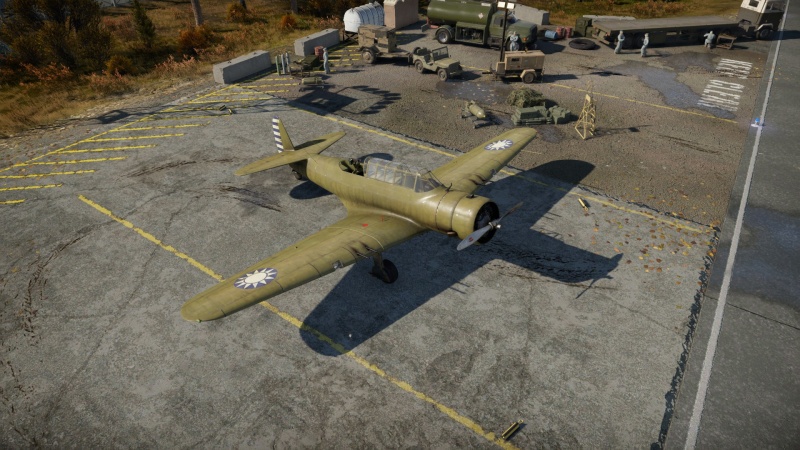 Despite its large size, the V-11 is decent at turning although it is outshone by the many biplanes it faces. The acceleration and climb of this aircraft is poor, and is usually an easy prey for any interested fighter. With the use of landing flaps, the plane can enter speeds as low as 120 km/h without stalling, which can be used to stall trap potential enemies.

As with all strike aircraft, the V-11 gets an attacker air spawn. This should be used to avoid any confrontations. The speed and climb of this plane is poor, keeping altitude is important in order to avoid enemy fighters. Wait for friendly fighters to arrive to the scene before deciding to engage ground targets. Bombs can be used to damage bases or to destroy light pillboxes.

You can also use this aircraft to catch out any unwary enemy fighters. The 4 x 7.62 mm Browning machine guns are adequate to take down enemy aircraft. Only engage if you have an altitude advantage as fleeing in this slow aircraft may be difficult. Some fighters such as the Bf 109 B can be outmanoeuvred, using the combat flaps. However, it is recommended to try to preserve your speed unless the area is clear of any potential enemies.

Although the Vultee V-11 wasn't the most renowned aircraft in the World War 2, the history of this aircraft can trace back onto an airliner, surprisingly, the Vultee V-1.

The ill-fated V-1 has only 25 of them built due to the strict regulations from the Bureau of Air Commerce on single-engine airliner, albeit its rather good handling; the aircraft was then converted into series of 2-seater attackers with variants such as a floatplane version. The USAAF bought a few of them, reinforced its airframe and used them for evaluation as the YA-19, which proved to be inferior to twin-engine attackers and thus these aircrafts were soon transferred to the Panama. In the mean time, V-11s that were based on the reinforced YA-19 were sold to 4 other countries: Brazil, Turkey, USSR and the Republic of China.

The newly reorganized Republic of China Air Force was in need for attackers in view to modernize the air force, an order of 30 V-11Gs was placed in 1935 and 29 of them would be assembled in China by the Central Aircraft Manufacturing Company (中央杭州飛機製造廠 at Hangzhou, Zhejiang; currently PLAAF Jianqiao Airbase) or by Shiuchow Aircraft Manufacturing Factory (韶關飛機製造廠 at Shaoguan, Guangdong); these aircrafts were handed to the "International Regiment 國際中隊" during the 2nd Sino-Japanese War for operation and was first used to bomb the then occupied Japanese airfield at Bengbu, Shandong (山東蚌埠) in early February, 1938; later in the same month, the regiment bombed train stations and airfield occupied by the Japanese forces again; both attack runs have no recorded losses.

As the Japanese got the upper hand on the war, these aircrafts were then transferred to the rear and after a mountain crash of such type of aircraft, the V-11s and the later V-12s were soon downgraded as liaison aircrafts or trainers until late 1940 when all of them were dismantled.