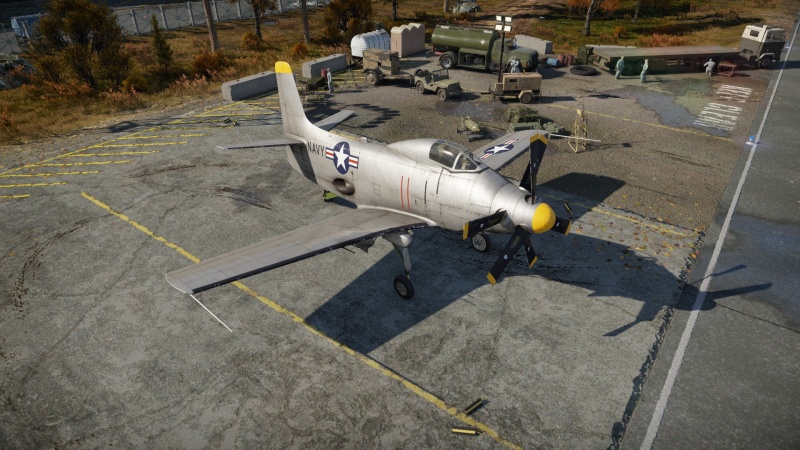 The A2D-1 was outfitted with the Allison XT40A turboprop engine, effectively doubling the horsepower over the AD-2 Skyraider, however, installation of contra-rotating propellers was needed to harness all of that power. To accommodate this new thrust, the wing roots were decreased in their thickness while the tail section became larger and taller in order to stabilize the aircraft when under power. With the new engine situated, it was time to focus on the armament of the aircraft. Basic offensive 20 mm cannons were implemented, placing two in each wing with each gun being loaded with 400 rounds of ammunition, twice the firepower as on the Skyraider!

The Douglas A2D-1 did not have the same legacy as the A-1 Skyraider, however here in War Thunder new life has been given to this hybrid turbo-prop fighter allowing it to find a niche as a strike aircraft turned fighter and/or bomber, all depending on the ordnance outfitted by the pilot. Not to be underestimated, though having a bulky airframe, the A2D-1 has the speed and ordnance which can help in turning the tide of a battle. Often this aircraft will come up against jet aircraft, but its lack of speed can be made up in manoeuvrability and skill of the pilot in command.

5500 shaft horsepower (!sic) — Let this sink in for a moment. Nigh triple that of the another contra-rotating propeller machine in the game, the Seafire Mk.47 - queen of the Spitfires. Furthermore looking at the statistics, one sees more to be gay about. The top speed rivals early jets, rate of climb is phenomenal and the short take off run speaks for a great acceleration. Every characteristic tells the tale of a great energy fighting machine. This attacker is very much unlike its older cousin the AD-2 Skyraider.

But the devil is in the detail. The wing loading is exceptional high >220 kg/m², sitting even above the P-47 Thunderbolt. It further does so in category of weight and size. Make no mistake, the Skyshark is a Skywhale and flies appropriately at times. Due the weight, the elevator authority feels weak and one will kiss the ground more than once, before learning to fly with the momentum properly. Rapid pitch changes are not the Skysharks forte, an abusable fact known to aces. Worse still is the jittery behaviour while manoeuvring or taking aim. Again the aircraft's mass will delay any inputs, especially noticeable in simulator mode. Another quirk is the engine itself: As a turboprop the jets require a spool-up time when going from low to high power.

Of course one wants to exploit the A2D Skysharks' advantages. From above we can notice a plane much simuilar to it: The P-47M Thunderbolt. However, in one thing they are apart: Their climb rate, the Bolt's Achilles heel. Further the acceleration is better, thanks to the 5500 shaft-hp allowing for a better sustained turn rate despite mediocre manoeuvrability. This allows the A2D to outshine many early jets in turn dogfights. Maintaining a Yo-Yo with 350 km/h IAS is possible and sadly necessary, any slower than this and the aircraft becomes less responsive. A rare case were lower speeds reduce overall controllability. Again the max weight rears its ugly head.

The A2D-1 has no protection for the pilot which makes it very vulnerable to AAA and other aircraft. The radar is also vulnerable to being hit. Belly landings can lead to the aircraft destroying itself beyond repair, but if done in a certain way now, due to damage model changes, the A2D-1 can indeed belly land.

The propeller driveshaft besides the engines is the most important part of maintaining thrust, as if it is damaged too much the engine condition will not matter and a loss of airspeed will occur. The A2D1 can still fly on one engine if the prop driveshaft and the one said engine is lightly damaged or undamaged. The A2D-1's fuel tank is quite prone to fires as it is a big target due to being in the fuselage. While this may seem bad, do not let this discourage you from executing boom-and-zoom tactics.

The T31 is a modification of the Hispano-Suiza system and an improvement from the AN-M2 cannon, mostly in weight though. The quadrupple punch is a welcomed upgrade from the Skyraiders. However as the autocannons are mounted in the wings, the pilot must be cognizant of their range to the target and their convergence setting to ensure the ammunition hits the target and doesn't just fly on by.

The A2D-1 can be outfitted with the following ordnance:

Twenty-two total hardpoints allow the A2D-1 to carry an abundance of suspended ordnance much like the Skyraider. Choices of bombs, rockets and torpedoes open up the possibility of targets which can be engaged. Choices in bombs provide options with either 250 lb, 500 lb, 1,000 lb and 2,000 lb bombs. With these targets can range from mobile light trucks, anti-aircraft artillery, tanks, pillboxes and even bases. HVAR rockets provide flexibility to allow the A2D-1 to fire them from any angle (a restriction which bombs have) as the aircraft descends towards the target. The Mk.13-1 Case torpedoes are outfitted with a special frangible wooden drag ring and box stabilizer which allow for the torpedo to be dropped at high speeds and from higher altitudes than unmodified torpedoes making them a perfect option for the A2D-1 when taking on an anti-shipping role.

In Arcade and Realistic Battles, the A2D-1 can climb with no extra armament to become top cover for the allied fighters, or alternatively escort bombers to their designation. It can also carry one of its most hard hitting armaments and destroy several ground targets or destroy two bases. Though in Simulator Battles the jittery controls and lack of control make it more akin to a B-57B fast jet bomber.

With its outstanding acceleration and climb-rate the Skyshark can safely assault hostile ground forces and then decide to join the fray, by either assault climbing the closest hostile, relying on its acceleration to gain an energy advantage mid dogfight, or return to allied fighter pack to rejoin their climb. Going straight for the climb from the start will put the A2D at an immense energy advantage should the fight start.

Preferred combat styles are energy fighting, due its aforementioned acceleration and climb-rate, but also Boom and Zoom for the Skyshark is a heavy weight, note though it can easily reach its terminal velocity and loose all wings, coupled with the slow spool-up-time of the engine from low power, a provident engine and air-brake control is paramount! The G-Suit is a welcomed addition, but will often lead to ripped wings via g-forces in diving maneuvers.

Combat versus Jets differs amusingly little than versus propeller crafts. After easily gaining an altitude advantage, dive on the hostile and force it to break away (turn), hence losing speed and energy. Three things could happen now.

Versus propeller fighters one should engage in turnfights, otherwise the Skyshark is most dominant against most WW2 fighters. Few Rank 4 fighters can challenge the A2D on equal terms, so stay sharp.

The A2D-1 can be a very valuable asset to teams looking to win by destroying ground troops or assaulting the airfield. However the Skyshark is so heavy weight and hence slugish that every strafing attempt is an inch away from a crash. The momentum change comes later than expected and is more akin to a medium bomber like the B-25. One is not surprised the US Navy stuck with the older AD-2, as in the ground attacker role the Skyshark must play a slow game. Take time for every attack run and try to maintain a speed way above 300 km/h IAS with combat flaps. This is a very high velocity for strafing runs, however any less and the plane will not rise above the newly explosive laden ground...

The A2D-1 is equipped with an AN/APS-19 search and tracking radar. The radar is mounted in nose, inside the propeller hub.

The Douglas A-1 Skyraider was an impressive aircraft for a piston-driven propeller-powered aircraft which survived into the jet age, being used by the United States Navy, Marine Corps and Air Force and around nine other countries over its 40-year service. Like many aircraft which were successful, they went through many iterations and variants to keep them up to date with new requirements and technology as they came about. In an age where jet aircraft were beginning to overtake propeller-driven aircraft in all aspects of military service, the Bureau of Aeronautics which was the U.S. Navy's material-support organization was looking for a suitable option for an attack aircraft which would be more fuel-efficient than the upcoming jet fighters. To meet the Navy's requirement, Douglas Aircraft looked to their AD Skyraider airframe and considered modifying it to accept a more fuel economical turboprop engine.

In the early years following the war, jet engines underwent rapid development. This attracted the interest of the US Navy, which sought to arm itself with aircraft that were superior to that of potential opponents in speed, altitude, payload, and flight range.

As it turned out, jet engines were perfect for fighter aircraft but too "voracious" for strike aircraft, as they significantly reduced their range. The best engineering solution was to introduce the turboprop engine, which was a task the Douglas company undertook.

Initially, engineers simply wanted to replace the piston engine of the Skyraider attack aircraft with a turboprop engine. However, this led nowhere and the vehicle required significant modification. In the end, the engineers settled on a prototype with Allison Т-40А-2 turboprop engines and coaxial propellers.

The first flight of the XA2D-1 prototype, called the Skyshark, took place on May 26, 1950, but engine vibration nearly destroyed the aircraft and it was forced to land after only two minutes. By December 1950, the prototype had already completed over a dozen flights. However, a routine flight on December 19, 1950, ended in tragedy. Due to issues with the engine, the vehicle and pilot crashed. Nevertheless, testing continued and, despite the many technical problems that plagued the aircraft, the army ordered 10 pre-production models of the A2D-1. However, on August 5, 1954, another accident occurred when the main gearbox failed, and the aircraft crashed a short distance outside Los Angeles. This time, the pilot managed to escape the aircraft, but the project was closed and it was decided to dismantle any existing prototypes. Apparently, this decision was influenced by the fact that in the same year for the first time Douglas got another project in the air, this later became the famous A4D Skyhawk - a new generation of jets.