The AN/APS-19 is an American airborne target detection (search) radar with tracking capabilities. In game, it is found on the A2D-1. 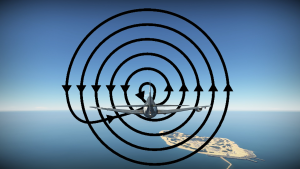 Like the AN/APS-6, the AN/APS-19 historically operated in a "Spiral Scan" search pattern, however for simplicity it is modelled in game with an extremely rapid raster scan. In a spiral scan the radar dish spins rapidly, scanning the area in front of the aircraft following a spiral path (see image to the right). As a result of this, the radar appears to sweep very rapidly on the radar display, however targets are not updated on every pass as the radar is pointing at a different angle on each pass. Likewise, depending on where the radar is pointing,the effect of ground clutter is different, making it appear to "pulse" on the radar display.

The AN/APS-19 was developped by the Sperry Corporation to be a lighter and more capable replacement for the AN/APS-4 and AN/APS-6 radars. The radar retained the spiral scan pattern and gun aiming modes of the AN/APS-6, but with a higher power output to increase range. The radar was also able to function in sweep-scan mode (where the radar sweeps side to side, like the AN/APS-21), retaining the functionality of the AN/APS-4 radar, but with better scanning angles. The radar was phased into service, starting in late 1946, gradually replacing AN/APS-4 and AN/APS-6 radars on naval aircraft.