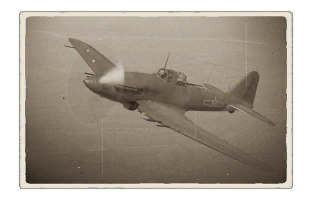 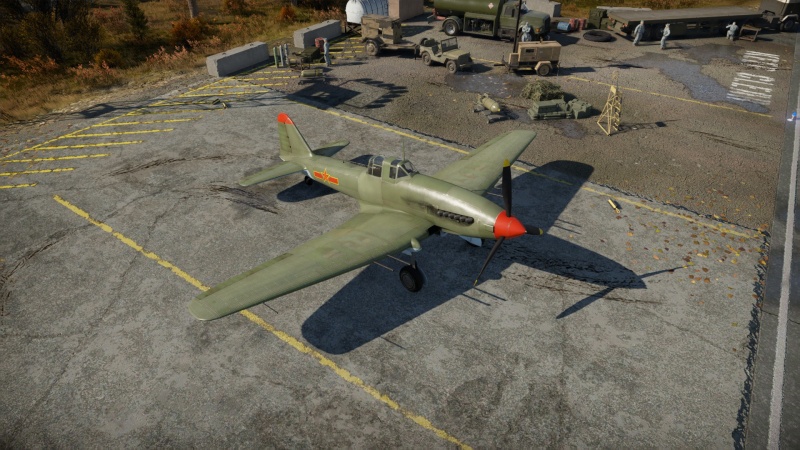 An attacker aircraft of identical make to the Soviet version, the IL-10 (1946) provides the substantial ability for ground attack with its ordnance and four 23 mm autocannons. A gunner with an autocannon armament as well at the rear also can help provide powerful deterrence to any fighters attempting to follow the IL-10 (1946).

The Il-10 (1946) is a very well-defended plane. It has armour protection all throughout the front half of the fuselage and a bulletproof glass in front of the pilot. These armour can protect against most rifle-calibre rounds and maybe even some autocannon rounds. The construction is also robust, with all the modules centred into the armoured portion of the fuselage. The more likely way an IL-10 (1946) will be shot down is when the enemy shoots apart the plane's wings, tail, or their respective control surfaces.

All priority in the modification unlocks should go into Flight Performance and Survivability. The Offensive 23 mm module can wait as it unlocks no new rounds for the IL-10 (1946) aside from the new belt arrangements. By the Tier III and IV modules, some considerations can be made for the turret and rocket modification depending on the player's preferences. The turret module can allow for more armour-penetrating rounds to be used against tailing fighters, or a higher concentration of HEF ammunition. The rockets can bring powerful high-explosive projectiles onto ground targets, but the IL-10 (1946) can only carry four rockets total, so they will not offer as much ground attack opportunities as the 23 mm autocannons, though they are more reliable to destroy tanks with.

NS-23 cannons are not capable of destroying medium or light tanks even with AP ammunition. This severely hinders the aircraft's ground attack capabilities, so it is best utilized as a multi-purpose aircraft similar to the B7A2 Ryusei. However, it is worth noting that this aircraft wields the ability to carry a varied payload of both bombs and rockets. With proper aim, it is possible to destroy heavy tanks albeit very difficult as there is no bombing reticule. The "air targets" belt for the 23 mm cannons have the ability to demolish soft ground targets such as armoured cars and AAA units, but also retains the ability to destroy fighters and bombers alike with only a handful of rounds. Therefore, it can be beneficial to first attack the enemy's light defences and then if a teammate has been forced to a lower altitude by a pursuer, attempting to alleviate the stress of that pilot can be beneficial. Like the La-9, the IL-10 (1946) has the ability to fire two of its 23 mm cannons instead of four as the ammunition pools are separate. A good strategy is to use one set of 23 mm belts for attacking ground targets, and the other for destroying enemy aircraft.

If found in a sticky situation, the IL-10 (1946) pilot may choose to call for help or to "roll the dice" and use the 20 mm tail cannon. While it is effective, hitting the enemy at longer distances can be very difficult, especially without the "new 20 mm cannon (turret)" module upgrade. It is best to lure an enemy by turning and evading their fire and then lining them up directly with the tail cannon. It is possible to destroy the enemy aircraft with less than 10 shells if they are very close and the tail gunner is accurate. Another unorthodox method of using the 20 mm tail cannon involves a situation in which an initial pass on a ground target failed. Depending on how close the IL-10 (1946) is to the ground target, it is possible to destroy it from behind with the 20 mm tail gun. This is very difficult especially as the distance from the target increases.

After its introduction in 1944, the IL-10 proved itself as a ground attacker even during the arrival of jet era, due to the inferior low-altitude performance of early jets. Meanwhile, in Mainland China, the ongoing civil war between CCP and KMT for the nation has almost over (main KMT forces retreated to Taiwan Island and the remaining were struggling on different coastal islands like Kinmen and Matsu). During that time, China only had propeller aircraft and before the outbreak of Korean War, PLAAF needed new aircraft to flush out remnants of KMT forces from Mainland's coastal islands.

In 1950, PLAAF started the import of IL-10s from the Soviets and in October, VVS stationed at Shanghai handed 25 of them to PLAAF 13th Assault Regiment; they were one of many aircraft that joined the 1st Anniversary of PRC establishment parade; by 1952, there were 254 of them imported into Mainland China.

The first time they really shone was in 1954-1955, the Battle of Dachen Island (大陈岛) in costal Taizhou (台州), Fujian, and also Yijiangshan Island (一江山岛) in Zhejiang. From 1st November 1954 till 18 January 1955, IL-10s joined the very first tri-service participated battle of PLA and helped PLAGF flush out the remaining KMT forces on the island. The attackers knocked down dozens of bunkers, buildings and some KMT vessels, once again proving their worthiness as an attacker.

These aircraft served PLAAF for 2 decades and were eventually replaced by the Q-5 in the 1970s.