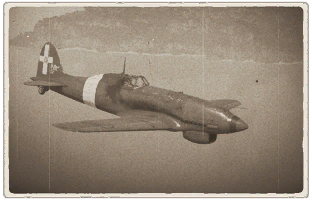 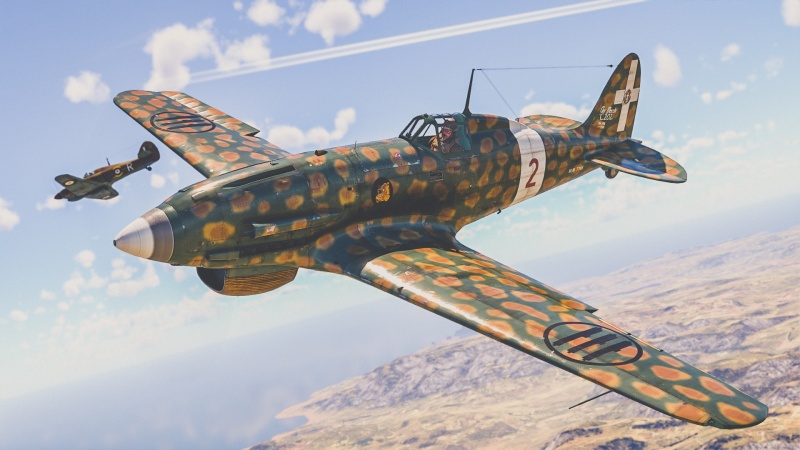 The C. 202D Folgore ("Lightning") is an Italian fighter which is best suited to attack other fighters since it is not able to carry bombs or rockets.

The advantages of the C. 202D are the combination of good speed and very good climb and roll rates. Furthermore, it is fairly sturdy, being able to take a few hits and get back to base without problem. The C. 202D is also an agile turnfighter at high speeds. However, flat out turning is a bad idea at low speeds, unless you abuse the roll rate to get into an advantageous position. Armament-wise its also okay, but many enemies it faces will have better weapons.

The C. 202D is quite vulnerable to any offensive armament, like the other C. 202 variants. The engine and water coolers lack any protection and are often one of the first to be on fire. The pilot is not well-protected. While the windscreen is quite thick, it is also very small and the 8 mm of steel will only rifle-calibre fire. Any calibre past that will reach the pilot.

The most important things the C. 202D needs are speed and altitude. It is generally a good idea to climb to at least 4,000-5,000 m before levelling out and gaining speed. From there on, it's Boom & Zoom, working your way from top to bottom. Priority should be given to P-39 Airacobras, Hellcats and Spitfires, as these are difficult opponents if they are allowed to engage on their terms. The Hellcat is a considerable problem for the C. 202D, since it is considerably faster and climbs fairly well. The best way to deal with them is to fight them at speeds above 400 km/h, where the Hellcat begins to stiffen up, but where the C.202D retains its very good roll rate, which you can use to spoil his gun solution by constantly changing direction.

While diving on a chosen target, be mindful of your speed. The C. 202D's rate of roll becomes considerably worse when you hit 600 km/h. However, the elevator remains functional up until around 700 km/h, and the rip speed is passed at 800 km/h. When trying to lead an enemy plane that is making a hard break turn, try to avoid making high G turns or turns that burn a lot of speed, as this rapidly bleeds speed, forcing you to engage in a dogfight where your mediocre low-speed manoeuvrability can offer an advantage to the enemy. While turnfighting is very much possible against some planes, it is advisable to run by going into a shallow dive. Climbing is a possible alternate strategy, the climb rate is very good for its BR, meaning that if you have a small speed advantage you can get some separation and climb away.

The weak guns make the C. 202D unsuited to effectively engaging bombers, especially well-defended ones such as the B-25 and the A-20. It is better to join up with your teammates and then try to attack them together if possible. Aim for the engines and wings, engaging them through Boom-and-Zoom tactics. The C. 202D is unable to carry bombs, rendering it useless for ground attack.

Tracers, Anti-air or Stealth belts are recommended as they deal the most damage, with a good mix of incendiary and shrapnel. The Breda-SAFAT's muzzle velocity is low and suffers above 400 m range, so only fire at or below that range for best effects. Furthermore, the armament is inadequate to deal with bombers. It is best to avoid them entirely or focus on taking out the engines. The only exceptions are the very early biplane bombers, such as Swordfish, Po-2 and the likes.

The story of the C. 202D began in 1941 when the newer and deadlier Macchi M.C.202 Folgore ("Lightning") began to equip units of 7° Gruppo. It was developed and manufactured by Macchi Aeronautica for the Italian air force. The C. 202 was designed by a team headed by the company's chief of design, Italian aeronautics engineer Mario Castoldi. As per company tradition, Macchi aircraft designed by Mario Castoldi received the "C" letter in their model designation. It was derived from the C. 200 Saetta by using the airframe of the plane as a foundation for a new fighter. However with various different modifications, for example the cockpit became enclosed. It also would be modified to accommodate a more powerful licensed-built Daimler-Benz 601Aa engine. Swapping the old, radial engine for the German-designed, inline Daimler-Benz produced tremendous performance gains. for the aircraft. The C.202's fuselage would also streamlined to eliminate unnecessary drag as well as to better house the new engine. Where the Saetta"s top speed was only 504 km/h, the Macchi C 202 Folgore enjoyed a top speed of about 600 km/h. Eventually after a few prototypes and refinement of the design, the aircraft would receive its baptism by fire in 1941, around the same time it would first enter service inside of the Royal Italian Airforce. Many pilots had loved the design and the allies would begin to realise its presence and the threat it posed due to the great characteristics it sported. It was one of the many great Italian aircraft which would usually win dogfights it took part in. It was serve on the African front and more famously in the countless sorties around Malta. The Folgore would grow into the backbone of the Italian air force. In fact, it would soon be regarded as one of the best Italian fighter aircraft of the second world war. It also did receive several upgrades during its left. In terms of this specific variant of the plane known as the C. 202D, in late 1941 the Italian Air Force would conduct an experiment. This experiment included changing the position of the coolant radiator, and installing it directly under the engine. This idea was not the first time it was attempted, as it was already attempted with the prototype of the Caproni Vizzola F6M, which made its first flight in September 1941 with a radiator directly under the engine. This variant of the C. 202 was specifically tested on the serial variant known as MM.7768. The aircraft would then be re-classified as the C.202D. The new installation was designed in such a way to allow in theory, to simplify maintenance and improve the cooling system itself by eliminating the long and vulnerable pipes. Moving the radiator under the engine also created an opportunity to consider the possibility to carry external payloads in central position. However, during the experimental phase, it became evident that doing this came with some setbacks. The testing revealed that it would cause unacceptable drag penalties which would hinder it during dogfights, so the idea was dropped. Moreover, changing the design would have caused delays in the production line and cost way too much money for Italy.

An experimental prototype of the Italian Macchi C.202 fighter of the third production series with a radiator located externally under the nose. The development of the aircraft was carried out in 1941, the prototype itself built by the spring of 1942, receiving the production designation C.202D. The unusual arrangement of the radiator block (the air and oil cooler were now located in a single mount) was supposed to make the engine cooling more efficient and the installation of the radiators easier. In addition, the forward displacement of the air cooler would make it possible to place a suspension point for bomb weapons or a fuel tank behind it. However, flight tests showed a significantly increased drag on the C.202D, which reduced the fighter's speed to below acceptable. This circumstance, plus the vague prospects of re-equipping the serial C.202 with a different type of radiator - all this led to the fact that the project remained at the stage of an experimental prototype.