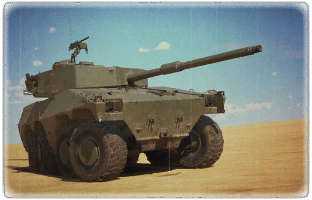 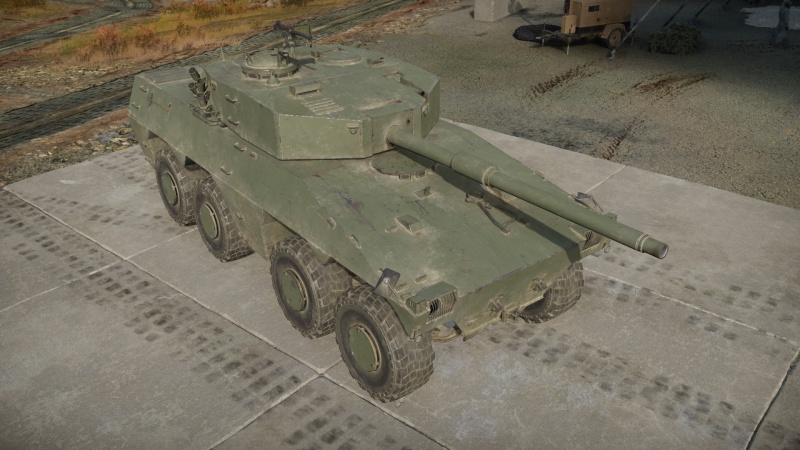 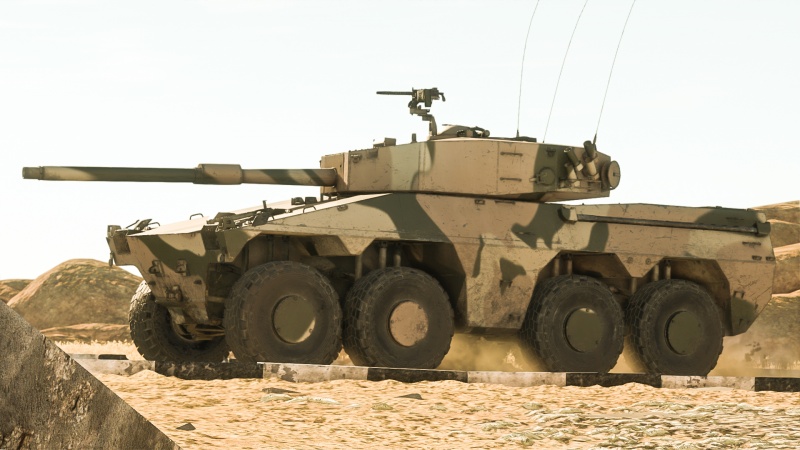 As seen here, the frontal plate has double spall shields divided by a 200 mm air spacing. 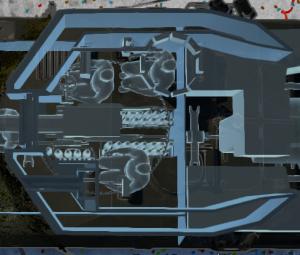 As seen here, the turret mantlet, front and sides all have double spall shields separated by an 80 mm air spacing

Due to the massive size of the Class 3, it is able to withstand high calibre ammunition due to the poor armour as it will not create enough spalling when penetrated. The crew spacing as well as the interior spacing makes it one of the hardest wheeled vehicles to destroy in the game with only kinetic energy (KE) penetrators (APDS, APFSDS, etc etc). Centre of mass shots from the front with KE shells will often take the driver and set the engine on fire, but due to the turret crew being elevated, they are most likely to survive, meaning the turret is operational ready to engage any enemy threats. Chemical energy (CE) penetrators are a tricky topic when it comes to the frontal armour. Depending on the ammunition used on certain impact angles, the Class 3 might be able to withstand the impact. CE rounds are most likely to penetrate and be partially or fully stopped thanks to the inner spall shields at a perpendicular angle but will knock out the driver and disable or damage engine as well as igniting the ammo rack. This changes when ATGMs take a play in engagements, they will often create much more spalling than tank-fired HEAT rounds as the calibre is higher (meaning a greater explosive mass) and will cause destruction by overpressure if hit from the sides or if the ATGM spall goes all the way from the front to the back while penetrating the sides. For this same reason it is recommended to only carry ~24-26 rounds in the vehicle as it will empty most of the hull ammo racks but still keep the ready racks full in the turret. The armour is not to be relied on unless there are specific enemies (T-54's for example) as most of them will always penetrate your hull. The Class 3 is immune to autocannon fire from the front and hull upper half sides and turret sides due to the spaced armour. This is an advantage compared to the rest of wheeled light armoured vehicles in which 20 mm and 30 mm autocannons often penetrate and knock out crew and inner components.

Having spall shields bring multiple benefits against both CE and KE.

The air gap between plates not only reduces and scatters the shrapnel in a flatter surface so that the penetrating remains are less but they also reduce the speed and penetration of small calibre fire (below 40 mm), meaning they will not penetrate the second plate (below 30 mm) or will reduce the amount of shrapnel generated (above 30 mm). They also prematurely detonate APCBC shells and reduce the shrapnel generated. Due to this, all APCBC and APHE fuses will be activated which can be lethal in calibres higher than 76 mm even with the spall shields depending on where the round hits at.

When a round is fired at the centre of mass frontally, the double plate armour will not only reduce the shrapnel but it is able to fully stop it, specially if said threat has a relative low explosive mass despite the armour penetration (PG-9 for example found on the BMP-1). When fired at the turret it may vary as it totally depends on the firing angle. A perpendicular hit to the turret will be lethal but an angled hit will often deviate the shrapnel which may damage or destroy modules but will keep the vehicle operational. Due to its huge height, the enemies that fire at turret will have a more angled hit, meaning that most of the shrapnel will be launched towards the roof and not to the crew compartment, this can take one or two crew members depending on the hit.

Despite the tremendous size and mass, the Class 3 is almost as fast as the Radkampfwagen. The 8 wheels give it an almost perfect cross-country capability with exception of mud, snow and deep sand. Acceleration wise, it takes time to make the Class 3 move if on a non urban environment or at an angle due to the mass. It has traction on the 8 wheels, meaning it is able to move even if only a pairs of wheels are touching the ground. As expected, due to the length, the turn radius is huge and it requires a big surface to be abe to make a 180° turn. Besides the length and height, the Class 3 is tremendously fast for a vehicle its size, specially if it is on urban environment. It is able to reach speeds of 80 km/h even on dirt. This not only makes the Class 3 a fearful tough to crack behemoth but also a flanking and "Hit N' Run" behemoth. Thanks to the stabilizer, the Class 3 is able to fire at enemy targets while on top speed, this requires practice but a handled commander will be able to achieve so.

The Class 3 has a GT-3 105 mm rifled bore main gun, it shares the same ballistics as the L7A3 the Leopard family share with the exact same ammunition. Thus, there should be no hard enough threat to kill, specially if DM33 is being used with its potent 408 mm of penetration. 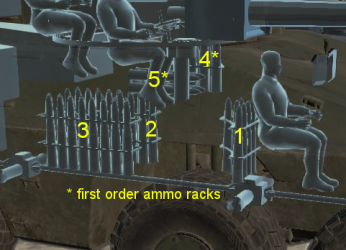 The Class 3 is considered like a bigger Radkampfwagen. Due to its speed, it may be used in a flanking manner, being able to go around the enemy and surprise them where they do not expect. When flanking, it is recommended to use roads if possible, as the Class 3 is a wheeled vehicle, and rough terrain will slow it down. However, even off-road, the vehicle is still capable of speeds that are much higher than many other contemporary MBTs.

It may also be used in a playstyle of a fast MBT. While the hull of the Class 3 is weak and vulnerable to overpressure, the whole front of the vehicle has multiple well angled and very bouncy plates, both interior and exterior, which allows the turret and hull to sometimes take hits without damage, or even ricochet some shells. However, it is important to note that even though enemy shells have a chance of bouncing, it is best not to rely on this, and to use the vehicle's stabilizer and situational awareness to get the first shot off.

The Henschel Wehrtechnik TH200, TH600 and TH800 were a series of armoured vehicles developed in Germany in the early '80s as test vehicles that could undertake a wide variety of combat roles. These vehicles have a hull of welded steel armour that provides guaranteed protection to low and high calibre machinegun fire but lacks protection against anti-tank weaponry. A series of 3 versions were done: The TH200 4x4, the TH600 6x6 and TH800 8x8. Each one of the variants had their own combat roles.

The smallest version of the platform, it was meant to be used as a reconnaissance vehicle as well as a mobile support vehicle, armoured personal carrier and weapon carrier. It could utilize a 90 mm Cockerill gun and turret. The combat weight was around 9,250 kg making it capable of being transported by heavy air lifters and also give it amphibious capabilities.

It was a test bed for a mobile gun system with a 105 mm cannon in a three man turret. A Rh L/44 120 mm cannon could also be added. The combat weight of this vehicle was augmented to 24,500 kg, making it loose considerably the options for air lifters as well as losing completely the amphibious capabilities.

This version had a weight of 35,000 kg and could carry weapon systems with weight up to 13,000 kg, making it capable of carrying a heavier turret for both 105 mm and 120 mm cannons, anti-air systems for both 35 mm Oerlikon KDA autocannons and Surface-to-Air Missiles and 155 mm howitzers.

Class 3 was the third and heaviest wheeled combat vehicle prototype to compete for the South African Army. When developing a heavy version of a wheeled tank, the designers were not limited by limits of weight or dimensions, therefore, in terms of weight, firepower and level of security, the Class 3 is a true wheeled tank. The competition commission opted for a lighter prototype, which later became the Rooikat 76 tank destroyer. The Class 3 prototype was exhibited at the Bloemfontein War Museum with a different turret.