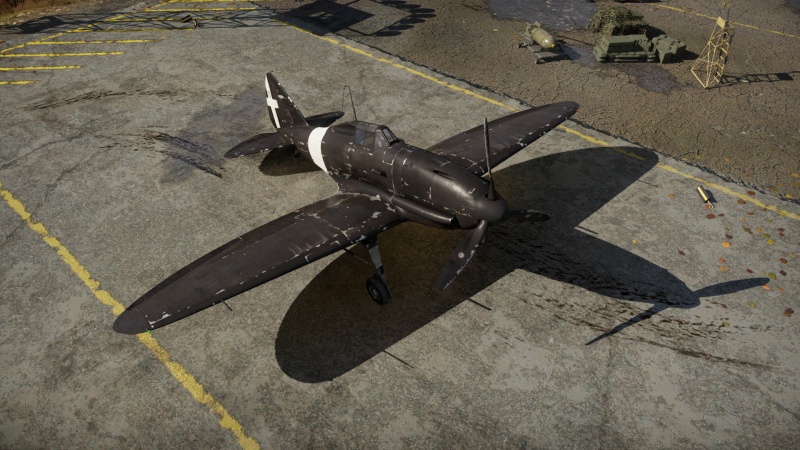 The Re.2001 CN "Falco II" provides an overall smooth flying experience, with a competitive turn rate, solid all-altitude performance, good elevator authority, and moderate climb rate. Its engine, the R.A.1000, is basically a more powerful and reliable DB 601. However, the Falco II is plagued by several critical weaknesses. Its speed is quite lacking when compared to contemporary fighters like the Bf 109, Spitfire, and most American fighters you will encounter. It also has a relatively weak airframe and large fuel tanks which can be hit easily. The cooling system is wing-mounted and if damaged can reduce the effectiveness or even outright prevent the water-cooled inline engine from working properly.

In short, the Re.2001 CN is a plane which requires an able and smart pilot in order to make the most out of it, but when used correctly, it can be a fearful machine.

The stock Breda-SAFAT belts are very poor, containing mostly ball ammunition which causes little damage. It is recommended to upgrade those quickly. The upgraded belts for the Bredas themselves are quite good, but the potential damage is limited by the low muzzle velocity and poor ballistics beyond 300 m. The most important modules are Engine Injection, 20 mm belts/cannons, Engine, Compressor, Wing Repair then the survivability modules to help remedy the weak airframe.

The Re.2001 CN can be outfitted with the following ordnance:

The Re.2001 is a very manoeuvrable plane with decent performance at all altitudes. The great MG 151s (with access to devastating Minengeschoß rounds through the Air Targets belt), respectable climb rate, and good high altitude performance allow it to be an effective interceptor. With its ability to mount a single 250 kg bomb, it can also be a fighter bomber that can drop its payload and then join the furball as a regular fighter.

Generally speaking, the Breda-SAFATs have very poor ballistics from farther than 300 m, even with Air Targets belts. To make effective use of the Breda-SAFATs, they can be used as 'spotting guns' to line up shots with your MG 151s. This is critical as using as little 20 mm rounds as possible to destroy a plane is very important due to the low ammo count of only 60 rounds per gun. Ammo conservation of the MG 151 is critical, especially in RB/SB.

Spitfires, Yaks, and A6M Zeroes are the kings of dogfighting below 3,000 m. If one attempts to fight you above 4,000 m, it is recommended to either make use their low speed at altitude to Boom-&-Zoom them or try to take a risk and turnfight them. The main reason the Re.2001 CN can turn fight with Spitfires and Yaks is due to its already good manoeuvrability made better by its combat flaps and decent rudder. A6M Zeroes will be able to outmanoeuvre the Re.2001 CN. The most common fighters of these types you will encounter are the Spitfire Mk Ia and Mk IIa, Yak-1, Yak-7B, early Yak-9s and early A6M Zeroes. Keep in mind that damaged control surfaces and engine and cooling modules will reduce the agility of the Falco II and its ability to outmanoeuvre enemies.

The Re.2001 CN can be used quite effectively in ground attack. Its 250 kg bomb has a decent destruction radius due to its explosive mass and the aircraft's manoeuvrability can allow it to bomb very accurately. The 20 mm MG 151s can do a lot of damage to light targets, either by AP rounds punching through thin roof armor, or by HE rounds detonating on and around exposed crew members and ammo racks. During night missions, the Re.2001 CN's nearly all black night camouflage can assist in keeping the aircraft hidden from enemy fighters and SPAAs.

The Reggiane Re.2001 was designed to be a replacement for the failed Re.2000, and did away with the weak Piaggio P.IX radial, in favour of a new, more powerful R.A.1000RC.41-1a Inline (which was a fiat built, more powerful and reliable DB 601A, the same engine used in the early BF 109s). Other than the engine and shape of the nose, there were no real notable changes between the Falco I and Falco II. The Falco II retained a fairly similar fuselage and even kept the entire tail unit. While considered to be equal to the Macchi MC.202, the MC.202 had the first call on the R.A.1000, and the Re.2001 was delayed by several design changes the Italian army insisted on, giving the MC.202 almost a full year head-start on its rival, leading to more Macchi fighters being produced than Reggiane fighters.

The CN variant was a Night Fighter and Fighter Bomber able to mount an optional payload of 640 kg and fitted with two Mauser MG 151/20 in gondolas under the wings and was primarily used in defence of Italian cities.